​With the Galaxy S20 series firmly in the rearview mirror, attention now focuses on the Samsung Galaxy Note 20 series, which has an “Ultra” model joining the family in place of the + model, and leaked renders of that device are appearing. The Note 20 will likely be released on August 5th during a “virtual” Samsung Unpacked event. Stylus Besides the Galaxy Note 20 series, reports claim the Galaxy Fold 2, Galaxy Z Flip 5G, Galaxy Tab S7/S7+, and the Galaxy Watch 3will also be unveiled. Samsung’s Note line, which is equipped with a stylus, has used Corning’s Gorilla Glass (The Note 10 series (2019) uses Gorilla Glass 6 as a protective layer).  This material, which is offered in thicknesses between 400um and 1,200um, can withstand the pressure of a stylus, but is too thick for foldables. The Galaxy Z Flip uses UTG (Ultra-Thin Glass) that is ~30um thick, allowing it to fold without deforming, but would open it up to damage from a stylus point like Samsung’s inductive S-pen.  While the phone’s system knows when the pen is near, it does not ‘draw’ until the stylus touches the cover, which makes it imperative that the cover be able to withstand the stylus pressure.

Samsung (and others) have tried other protective materials, particularly polyimide films, but they do not have the optical clarity of glass and tend to deform after only a relatively small number of folds. Samsung has used Dowoo and Schott’s UTG, but is also working with Corning to develop a UTG able to perform both foldable and stylus functions that is expected to be used in 2021, If Corning is able to complete its UTG development by the end of this year, they should be able to bring down the cost and take over the URG supply. 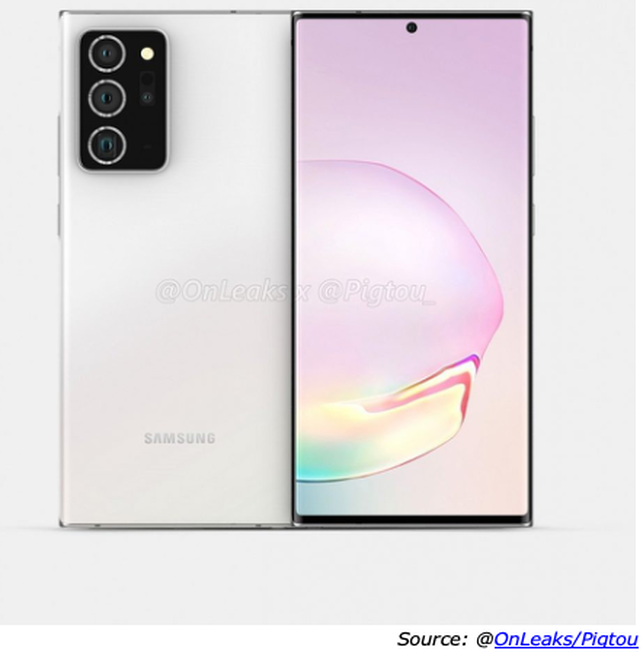 The +/Ultra model is expected to have a 6.9-inch WQHD+ AMOLED display with a 120Hz (variable) refresh rate. The Ultra model may be the only one to run 120Hz while at WQHD+ resolution, though. In terms of cameras, it could come with a 108MP Samsung ISOCELL Bright HM1 main sensor (same as the S20 Ultra), a 12MP wide-angle sensor, and a 13MP telephoto camera with 50x digital zoom on the +/Ultra. 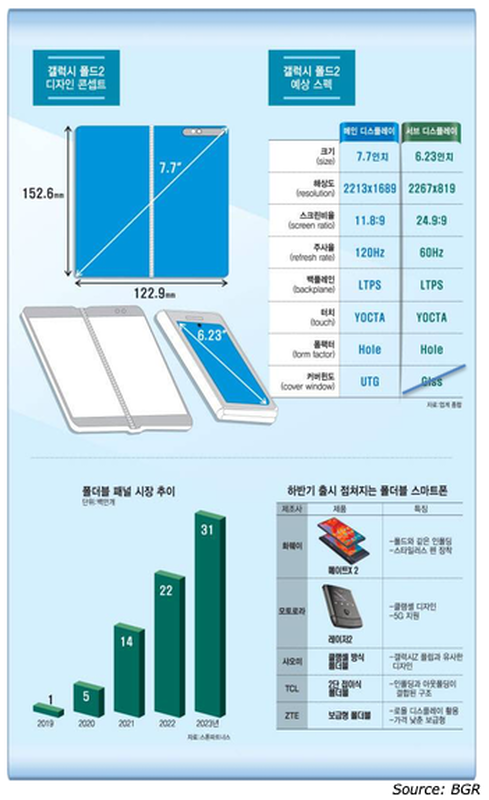 The latest reports claim the Fold 2’s inside display will be 7.7-inches in size and a flexible Dynamic AMOLED panel. The display may also have a 120Hz refresh rate and resolution of 2213 x 1689. The front panel will be 6.23inches,  a resolution of 2267 x 819, a 24.9:9 aspect ratio. Samsung expects to build 300,000 Galaxy Fold 2 units a month and sell 3 million units annually. In all likelihood, the Galaxy Fold 2 will make its debut alongside the Galaxy Note 20 and the Galaxy Z Flip 5G at an online-only Unpacked event on August 5th, according to the latest rumors. In addition, the Galaxy Z Flip 5G, 5G version of the clamshell foldable, the Galaxy Tab S7 tablet 12.4” version and the Galaxy Watch 2 with a rotating bezel along with some long-awaited health features are expected to be announced From: BGR
​