The display resolution wars may not be raging like they once were, but premium-tier smartphones still occasionally push the envelope. The mouthful that is Wide Quad High Definition (WQHD+) is now the standard-bearer for flagship quality, although Sony goes a step further with its 4K mobile display technology. Despite the prevalence of very high-resolution display hardware in the market, the majority of high profile smartphones actually default to Full HD+ (~2400 x 1080) resolutions in software. Samsung was one of the first to adopt this approach in its Galaxy S lineup, which continues to this day. The Galaxy S20 Ultra, for example, houses a 3,200 x 1,440 resolution WQHD+ display but is actually set to just FHD+ out of the box for better battery life. This has become a major trend for flagship phones in 2020, with few handsets delivering their maximum resolution out of the box. QHD isn’t really a thing in 2020. The reasoning behind such a sneaky maneuver is ultimately battery life. Powering extra pixels and pushing out higher resolutions puts more strain on your processor and eats up more power, especially from the GPU when gaming. There’s also the trend in 90Hz and 120Hz refresh rates to consider. Higher refresh rates put extra strain on processing components as well as using more battery capacity on their own when compared to traditional 60Hz displays.

Technically everything on the spec sheet is delivered, but  seldom straight out of the box. Instead, customers are left to dive into settings menus themselves, often sacrificing battery life in the process. It’s the for the ultra-expensive Galaxy S20 Ultra or the more affordable OnePlus 8 Pro, which is a far cry from first-generation QHD handsets, such as the LG G3 and OPPO Find 7 that offered QHD out of the box all the way back in 2014. Older devices like the LG G3 were set to QHD out of the box.  Furthermore, a lot of seemingly high-end devices are just outright shipping with FHD+ displays. This list includes the LG V60, LG Velvet, Motorola Edge Plus, Xiaomi Mi 10, the standard Samsung Galaxy Note 10, and many others. QHD and QHD+ have definitely fallen out of favor compared with a couple of years ago. In addition to the obvious reduction in resolution, most if not all phones with high-refresh rates sport variable refresh rates. They’re definitely not 90Hz or 120Hz all of the time, and it’s another compromise made at the alter to prolonged battery life. 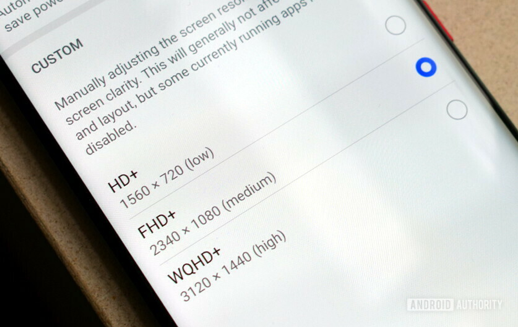 Source: Company
​
Samsung stuck with FHD out of the box for better battery life during the industry transition to QHD. The company left it up to the buyer whether or not to take the battery hit for a small increase in visual quality. Other manufacturers followed suit with similar software options in subsequent generations and is now a virtually universal feature. However, it was the move over to wider aspect ratios and the adoption of FHD+ that sealed QHD’s fate.
To understand why it is necessary to grasp the limits of human vision, there’s a point where even those with the best eyesight can’t tell the difference when resolution increases for a given display size and distance. For smartphone sizes and typical viewing distances, this pixel density improvement cut off falls somewhere between FHD (1,920 x 1,080) and QHD (2,560 x 1,440). Enter FHD+ (2,400 x 1,080), which sits nicely between the two in terms of pixel count and density. While discerning consumers may spot the difference between FHD and QHD, it’s virtually impossible to distinguish FHD+ from higher resolutions.

FHD+ has basically replaced the old QHD specification
A typical 6.5-inch smartphone has a resolution density of 339 pixels per inch at FHD and 452 at QHD. For very close viewing distances, around 400 or so pixels per inch is the point of imperceivably difference. A wider aspect ratio FHD+ display sits bang on this middle ground with 397 pixels per inch, making it indistinguishable from higher resolutions.

QHD or WQHD+ resolutions do not provide better viewing experiences -- all that required power could be put to better use. Technology continues to move on, with newer devices increasingly boasting battery consuming high refresh rate displays too. A slight reduction in resolution, that’s virtually impossible to notice, seems like a small price to pay for slick-looking 120Hz interfaces. Resolution is just a small part of the display experience and most would prefer to ensure all-day battery life. It’s also worth noting that the majority of video content streamed to mobile devices remains in the 1080p (FHD) format. Scaling this to fit 1440p (QHD) displays can actually make video look worse than playing back at its lower, native resolution while consuming more power, because FHD doesn’t factor into QHD by a whole number to keep pixels looking crisp. 1080p still looks sharp on a 4K display because each pixel is scaled up by a factor of 4. With QHD, the scaling factor from FHD is 1.3x, meaning resolution detail is averaged in order to fit, which can lead to a loss of detail and consumes processing power, or you phone may just dynamically switch resolution for playback. Unfortunately, the fear of a renewed resolution war keeps some brands tied to these overkill specifications. OEMs don’t think they can charge the highest prices in the market without offering the biggest values on the spec sheet. Even if they’re pointless numbers. However, plenty of great handsets have already dropped the pretense, including flagship and premium tier smartphones, and it’s a trend that looks set to continue. These phones, like the LG Velvet and OnePlus 8, could turn out to be some of the best buys of 2020, offering comparative real-world display experiences with lower price tags and better battery life. From: Android Authority