The PC has gone through tremendous change in the 2010s, but there’s much more to come in the 2020s

Figure 1: PC of the Future 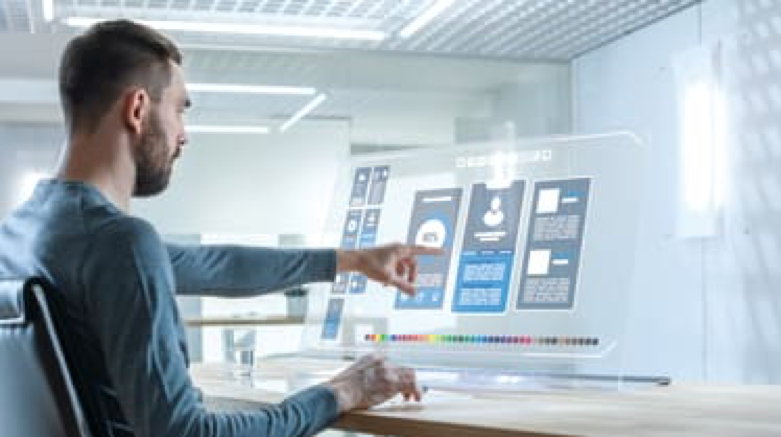 Source: Laptop Magazine
​
Looking at a ten-year old laptop, counter-intuitively, is quite a bit different than today’s versions  Much has changed, but the next decade already promises to deliver even greater innovation, from foldable laptops to devices controlled by artificial intelligence (AI) that could signal the end of the keyboard and mouse. One of the biggest trends coming to the PC market this decade — as early as this year — is foldable displays.
Lenovo demonstrated its first flexible ThinkPad laptop, which it proudly touted as “the world’s first foldable, fully functional PC”. Pegged for release in mid-2020, the expensive ThinkPad X1 Fold has a 13.3in flexible OLED panel which can be used flat like a tablet or folded into the familiar laptop position. While Lenovo includes a clever half-width Bluetooth keyboard for use on the move, a full-size keyboard and mouse can be attached and the device supports secondary displays through USB-C.
Other PC makers touted foldable laptops although these won’t make it to market quite as promptly. Dell’s Concept Ori has a screen that bends inwards to enable the device to transform between multiple modes, as does Intel’s Horseshoe Bend concept, which is based on the firm’s new 10nm Tiger Lake architecture and sports a much larger 17.3in malleable panel. Neither of these have a firm release date, but this unusual form factor is likely to become a lot more familiar over the next few years. While flexible displays are unlikely to become the norm in 2020, certain OEMs have taken a different approach – one that threatens to disrupt the industry more rapidly. Microsoft showed off its very own “foldable” last year in the form of the Surface Neo; rather than utilize a flexible display panel, the Windows 10X gadget has a pair of screens hinged together to resemble a book.  “Flexible displays will drive a wealth of form-factor experimentation but it’s going to take time for cost and durability to reach a point to establish the technology beyond a premium tier niche,” said Geoff Blaber, CCS Insight’s vice president of research. “It will take time to overcome issues of cost and durability. In the near term it will be dual folding displays that drive a new phase of form-factor innovation.” Others are taking the dual screen concept in a different direction. Lenovo, which first debuted a laptop with an E Ink display in 2018 with the Yoga Book C930, is taking things further in 2020 with the ThinkBook Plus, a regular-looking laptop with an E Ink display built into its lid. This, Lenovo claims, not only allows you to customize your laptop with a range of static images, but also gives users a makeshift sketchpad and at-a-glance information such as calendar appointments and messages. Blaber remains unconvinced that the second coming of E Ink displays will be any more successful than the first. Asus is also at the forefront of dual-screen laptops. It has already produced two relatively unsuccessful versions of the Asus ZenBook Pro Duo, which supplements the main screen with a second full-width but half-height display that sits above the keyboard. You can buy the 14in Full HD version for around £1,350 or its more powerful 15.6in Ultra HD sibling for £2,199.  Asus identified several scenarios where such a setup would be useful: coders wanting to see the code on one screen and the end result on another; students might keep reference information on the secondary screen while they work on a dissertation; video editors could put the timeline on one screen and the output on the other.

For the past decade, laptop makers have tried to make their products more tablet-like; the next decade could see manufacturers making laptops more like phones.
It’s not as if laptop design hasn’t already borrowed heavily from mobiles: features such as touchscreens, face recognition, “all-day” battery life and always-on connectivity are becoming ever more commonplace on modern laptops.
Meanwhile, some manufacturers have tried to make smartphones more PC-like. Samsung’s DeX platform, for example, transforms the firm’s high-end phones into a makeshift desktop PC by allowing users to connect it to a monitor, keyboard and mouse. In 2018, Razer unveiled the curiously named “Project Linda”, a working laptop that was powered by a Razer phone, and both Palm and Motorola have produced similar efforts – all without mainstream success. Malini Paul, senior research analyst at IDC, says it’s “unlikely” that systems such as DeX will replace conventional PCs. “However, we can expect to see more compute power in smaller portable form factors, with displays which can be used as a standalone device or docked to connect to a monitor for a full desktop experience,” Paul said. “It’s likely that smartphone developments and innovation will influence the features and form factors of laptops during the next decade, from power cords disappearing to seamless mobile connectivity through LTE/4G and 5G,” said Rahoul Varma, director of ARM’s Large Screen Compute Segment. “I believe that the laptops of the 2020s will be a truly mobile experience in more ways than one.”

Microsoft’s future vision for Windows is already starting to evolve. The firm’s Windows 10 on ARM operating system, for example, touts “instant-on” functionality and 4G support, again marking the slow transitioning of smartphone to desktop experience. AI is another big focus for both Windows and macOS, and an area of the technology industry that’s accelerating rapidly. Although Cortana and Siri continue to take a backseat in Microsoft and Apple’s respective OSes, this baked-in support for digital helpers could be a sign of what’s to come in the next decade; beyond barking commands at your PC, we could be entering a future where we will have fully fledged conversations with our devices.  If Intel’s “ambient” Mohawk River concept is anything to go by, PCs might even predict our actions, easing our dependence on mouse and keyboard; this prototype machine, which Intel claims demonstrates “future intelligence”, will remain on when closed, cleverly suss out when its owner is nearby, and – thanks to an array of sensors – know what tasks owners wish to perform. However, while AI is likely to play a bigger part over the next few years, few think it will be the go-to mechanism for controlling a PC. CEO of conversational AI platform ServisBOT Cathal McGloin expects that we’ll be talking more to inanimate objects over the next decade, including our PCs, but our voice and text interactions will become more blended. Users may start an interaction or transaction by voice and switch seamlessly to and from typed commands. “Voice alone isn’t a sufficient channel for many of the natural language use cases that we foresee being adopted in the consumer or enterprise market,” McGloin said. “Despite technological advancements in speech recognition and natural language processing, there are still many hurdles that would need to be overcome before a PC user would rely solely on voice commands to access information, create documents, complete forms, request account information, or transact. “Privacy concerns, as well as the lack of maturity of voice recognition and natural language technologies, will still necessitate the need for PCs to allow typed inputs and workflows guided by a mouse.” Expect security to be at the forefront of future OS experiences too. As hacks and data breaches continue to proliferate, both Apple and Microsoft are moving to soup up their onboard security. “While it’s certainly safe to expect some changes to the look and feel of PCs, thanks to things like foldable displays, perhaps a more critical change will be in the client-side authentication and security capabilities in the next generation of these devices,” explained Andrew Shikiar, executive director of the FIDO Alliance.
​
Advertisement - Article continues below “Much as biometric sensors have become a default feature on mobile phones, we’ll see the same on PCs – especially as operating systems depend on these components for more secure unlocking of devices and, ultimately, for secure authentication to online services.” While Windows and macOS are expected to continue to dominate the OS landscape over the next decade, this isn’t where the real innovation will take place, not least according to Eric Smith, director of Connected Computing Devices (CCD) within Strategy Analytics. “Mac and Windows will still serve largely the same markets and in the same price ranges over the next ten years, but the real fireworks will be how iPadOS, Android and Chrome change during this time,” he said. “Apple is transforming iPadOS into a computing platform, rather than a lean-back casual environment. Google will merge Android and Chrome into its Fuchsia OS in an attempt to mirror what iPadOS is becoming.” It’s possible the boundaries between mobile and desktop OS could blur completely. Apple has hinted that it could ditch its traditional desktop software in favor of a do-it-all OS that will power all of the company’s devices. Its Project Catalyst initiative, for example, lets developers easily port apps between iPadOS and macOS, and with the firm said to be gearing up to launch its first ARM-based MacBooks, we could soon see the merger of macOS and iOS. The processor will remain the beating heart of the PC, and with a resurgent AMD pushing Intel, we can expect accelerated developments in this component too. In the near-term, Intel will deliver its first 10nm desktop CPUs after seven years of 14nm products based on the Skylake architecture. And it needs to because AMD’s Zen 2 architecture – based on a 7nm manufacturing process – is currently winning the battle. AMD is set to release its Zen 3 core later this year. Performance improvements likely won’t be available until 2021 (AMD brings the new architectures to its Epyc server chips first).

AMD also announced its Ryzen 4000 processors for laptops at CES. Based on its 7nm Zen 2 cores promise faster clocks, better power efficiency and yet more cores. For the first time, AMD looks to have a laptop package to rival Intel. The big question is whether the ARM-based chips, together with Windows for ARM and whatever Apple produces, will make a significant dent. One thing seems certain: processors will continue to become smaller and more efficient. In November 2019, chip manufacturer TSMC claimed that its first 5nm CPUs are on track for a 2020 release, bringing with them a 15% increase in power and a 30% power reduction.

Storage also looks set for a 2020s shakeup, with experts expecting to see the introduction of cheaper SSDs that will be faster and higher in capacity than traditional hard disks. In fact, the hard disk could very soon vanish from the home market altogether, caught in a pincer movement between SSDs and the cloud. “With a steep decline of SSD prices since 3Q 2018, it is highly likely that there will be very limited room for HDD [hard disk drives] in PC storage market in the future,” said IDC’s Malini Paul. “Also, with the acceleration of cloud storage adoption, it would be unnecessary to install large storage drives in the PCs as files can be stored in the cloud, while the local drives can render better performance.”

Over the next ten years, PCs will become even thinner and lighter, faster and more powerful, and more closely aligned to the smartphone experience. It’s this latter point that many believe will have the biggest impact on the market, as consumers and businesses look for a more mobile experience. As 2020 is already showing us, there will also be more options beyond the traditional laptops, 2-in-1 devices and detachables, be it in the form of truly flexible displays or dual-screen devices, and it’s also clear that while AI is unlikely to become the primary input of OSes, we will lean much more heavily on non-keyboard interfaces, such as voice, by 2030.
This time ten years ago, many in the tech industry – including Steve Jobs when he unveiled the iPad in 2010 – lauded the idea that the PC as we know it would be extinct by 2020, but it isn’t going anywhere. From: Laptop Magazine