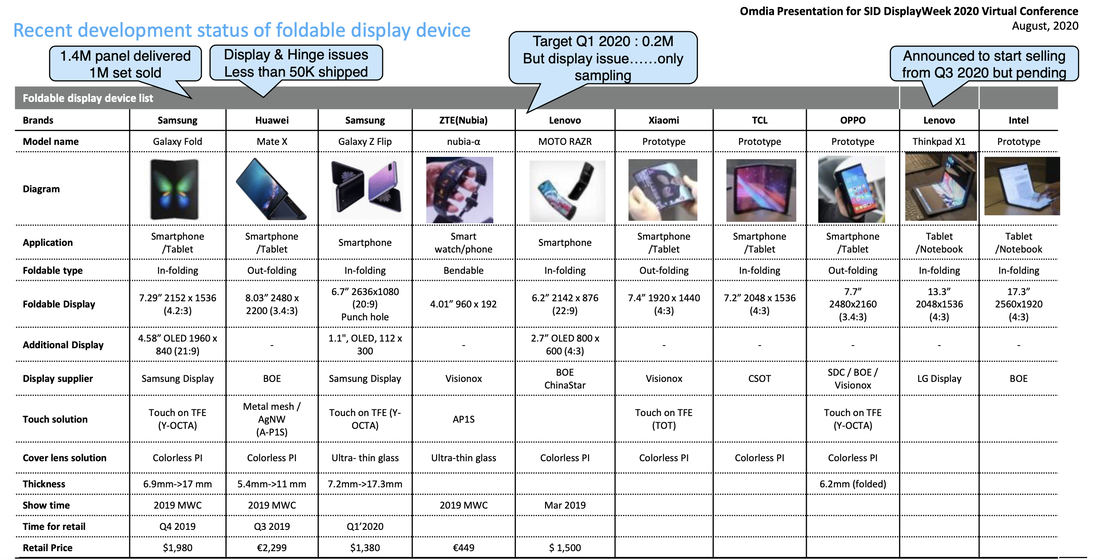 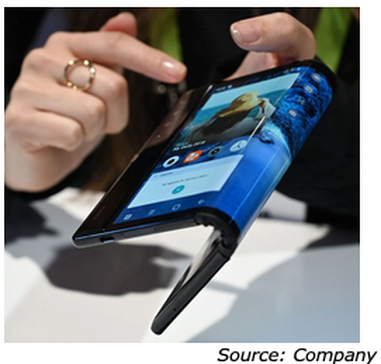 ​Many improvements in display manufacturing are being made to accommodate the foldable requirements, which surround the need for thinner devices.

Protective Cover Lens
Standard Gorilla Glass is too thick for foldables, so Samsung called on Sumitomo to develop a colorless polyimide film (CPI) to act as a protective layer. The CPI worked but was too soft and insufficient scratch resistance, so additional layers had to be added. Samsung has switched to ultra-thin glass (UTG) made by Schott and prepared by Dowoo insys, which laminates 10 30µm substrates together to improve yields in the initial handling, cutting, grinding to minimize breaking. Dowoo adds chemical strengthening at the individual substrate level. The hardness is tested using a pencil or ball point at 750g and 1000g dropped at various speeds with an angle of 45 degrees, according to the JIS standard. The Galaxy Fold 1, using a 40μm CPI layer and around 5μm hard coat has 4H hardness. The Mate X, has 10μm hard coat and 80μm CPI layer, has 6H hardness. Hardness declines with OCA materials underneath and compare poorly to traditional cover glass, especially when it comes to scratch resistance as concluded by JerryRigEverything. Damage starts at a levels 2-3 on Mohs hardness scale vs. 6-7 for Gorilla Glass.

Scratch resistance is quantified by applying steel wool to the substrate with a force of 1kg/cm2 and moved across the substrate 2500+ times. Initially, water contact angles are specified at around 110° and should not vary much after the test. The higher the value, the less likely scratches or fingerprints are visible.  Products with water contact angle values around 70° are easily scratched

Figure 3: Properties of UTG Compared to CPI and Polymer 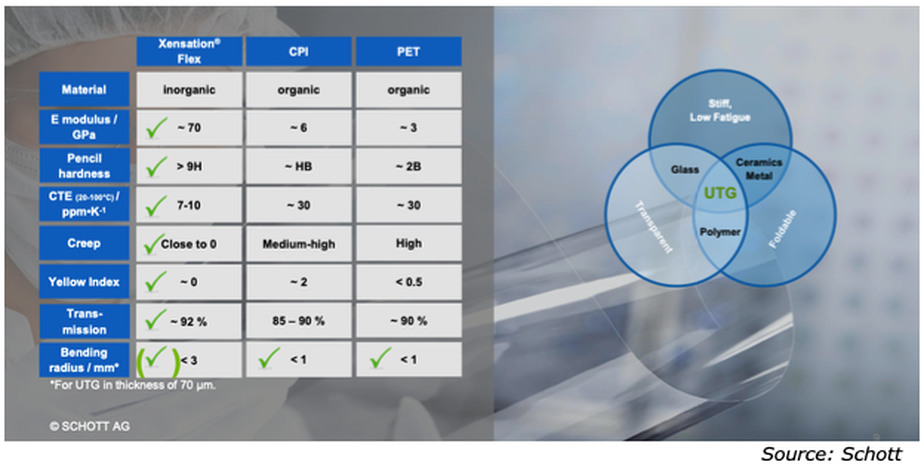 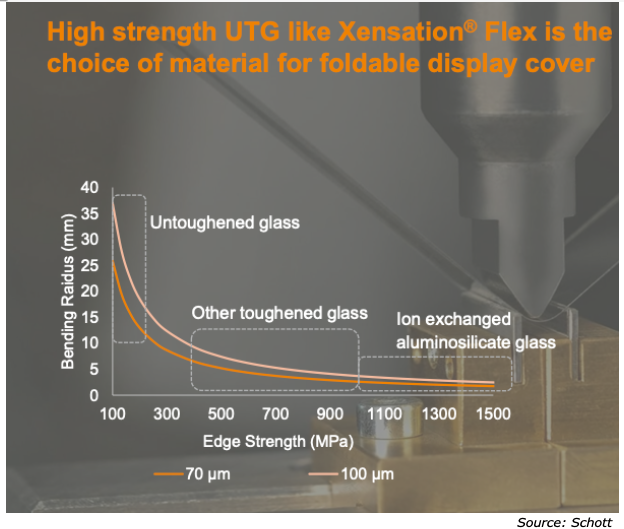 In summary, the UTG is harder and more scratch resistant than CPI but costs are almost three times higher.

Integrated Touch
Another, more highly developed thinning process is the elimination of the extra tough layer but integrating touch into the display.  Samsung pioneered the work with its Y-OCTA technology where the mesh sensors and the electrodes are close together. The touch reliability dependent on the RC constant, as the capacitance is created either with a neighboring electrode or a finger. The capacitance varies inversely with the distance between the electrodes requiring uniformity. Multiple bridges per intersection are required to ensure a good connection to maintain the proper resistance.

Y-OCTA uses a thin SiNx barrier layer that is sensitive to defects and not thick enough to encapsulate defects., which is not manufactured properly leads to shorts and low yields.  Samsung pioneered Y-OCTA (Youm[1] On Cell Touch AMOLED) touch technology, which integrates the touch sensor formation into the OLED manufacturing process.

The touch sensor is patterned on top of the TFE layers, which helps seal the TFE layers, eliminating a barrier film, lamination step an OCA layer and a separate 25-50μm touch sensor. It uses a 4-mask process that involves 2 PVD steps and 2 CVD performed at temperature low enough not to damage the OLED layers. Samsung estimates that Y-OCTA production costs of the touch capability are cuts by around 30%.

Samsung Display is now developing F-OCTA by replacing the inorganic insulator between the touch electrodes with an organic insulator to improve yields/lower costs. Presumably F-OCTA provides for the encapsulation of defects, higher yields and lower capex, The downside is a thicker layer (estimated at 30μm) that would increase the foldable radius and impact the neutral plane. By using IJP, the drop spacing would be reduced.

Since, Apple adopted Y-OCTA for the iPhone 12, other panel makers have developed their own version of the integrated touch including:

Under Panel Cameral
Apple placed the camera behind the display and then cut a nozzle in the display to allow the camera sufficient space to see the desired image.  Panel makers have come up with ways to eliminate the nozzle and seem to have settled on using an UPC.  The challenge in a top-emission display is to allow the camera a sufficient aperture ration to see through the display. Panel makers have solved this problem by modifying the pixel structure in the area where the camera is place.  By reducing the pixel density in the area where the camera see through, the camera gets more transparency as shown below. 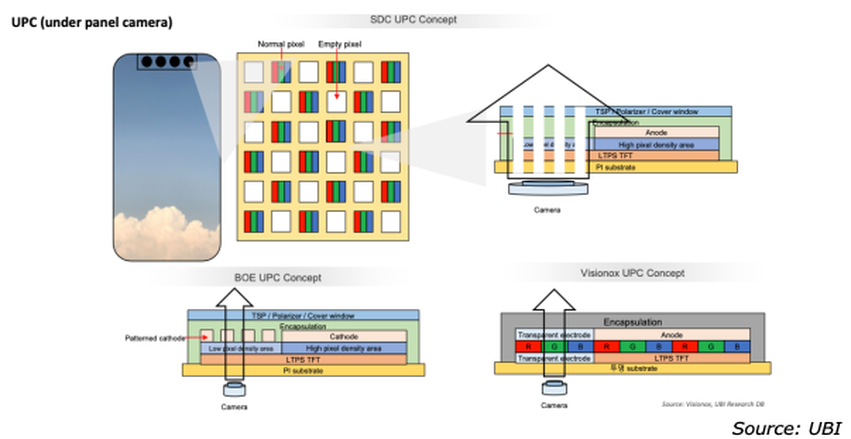 A circular polarizers (CP) are used in OLEDs to minimize the reflections caused by ambient light.  The CP consists of a polarizer film (PVA) and a phase retarder ( 1⁄4 and 1⁄2 wave films). The polarizer typically blocks ½ the light coming from the OLED and induces low reflection, true black and high transmittance without compromising viewing angles. Foldable OLEDs require extremely thin polarizers which are difficult to produce, include thin PVA process, coated PVA & phase retarders, e-type PVA, wire grid. But these polarizers are 50-100μm thick, costly and reduce foldability.

Previously, we described how BOE was working on a process that replaced the CP with a color filter (CF). The color filter blocked the light without any increased loss of transmission and improved the color gamut. Samsung developed a Color on Encapsulation (COE) process that patterns an RGB color filter on top of the Y-OCTA and TFE layers. A black matrix is patterned to minimize ambient reflection as is an OC layer. The COE stack would be <5μm.

TV Market and Technology
In 2020, TV panels are projected to have a 73% share of display area, which is expected to increase to 75% by 2024. LG Display, the only OLED TV panel maker staked out the high ground for OLED TVs, because inch for inch OLEDS were 2X the cost of LCD panels until extras, like FALD, QD color converters and mini LED backlights were added. But Omdia reported that the Over $1,000 TV category dropped from an 8% share in Q117 to a 4% share in Q220, even as total TVs dropped in shipments.

Discein projects that 65”and 65”+ will grow from a 10.2% share in 2020 to a 21.6% share in 2023.  If the two trends continue, these larger size TVs will have to drop way down in price, probably averaging less than $1,000.  It raises the question as to whether LGD will be able to maintain their cost structure, which has not come down much overe the past two years. In addition, in 2023, there is likely to be competition from Samsung, with QD-OLED, TCL with IJP OLEDs and possible BOE with WRGB OLEDs.

The effect of the corona virus is not expected to stop the long-term growth of OLEDs in the smartphone market as the OLED share is projected to grow from 30% in 2020 to 43% by 2025.

Red and green phosphorescent materials have enabled OLED displays to compete in the smartphone and high end TV markets, but the lack of a high efficiency blue has limited the technology in other markets because OLEDs cannot reach their full potential in terms of power efficiency. The lower efficiency of blue forces displays to use higher currents, which induces faster aging. In addition, the monopoly that Universal Display has on phosphorescent materials, enables them to extract a higher price/gram (in some cases 2X fluorescent material and to charge a royalty, which adds an average of 40%-50% to the cost of the materials. In an environment where panels are often sold at cash cost such as in 2019, UDC makes a substantial profit, while the OLED panel makers break even or show a loss.

The vacuum which UDC has created has empowered start-up companies like Cynora and Kyulux to develop competitive technology, TADF and panel makers to examine how they can lower emitter costs by developing their own phosphorescent materials to take advantage of key UDC IP that expires in 2022. Other material suppliers, like Merck and Idemitsu Kosan have also been developing phosphorescent materials in anticipation of the upcoming expiration date. UDC responds by saying that more recent IP that underpins their new materials will protect them from these competitive thrusts.

At SID, there were several presentations that addressed the opportunities in replacing the phosphorescent red and green and in being the first to offer a high efficiency blue. By contrast, UDC opted to be very quiet at DisplayWeek not participating in the exhibits and not delivering any phosphorescent papers at the Symposium.

LG’s Dr. Jun-Yun Kim summarized the emitter status in the following slide. He believes there is very little room for improvement in the red dopant, the green lifetime can always be increased as it is the most used color and blue needs to double its efficiency and significantly improve lifetime, although efficiency gains have a higher priority. 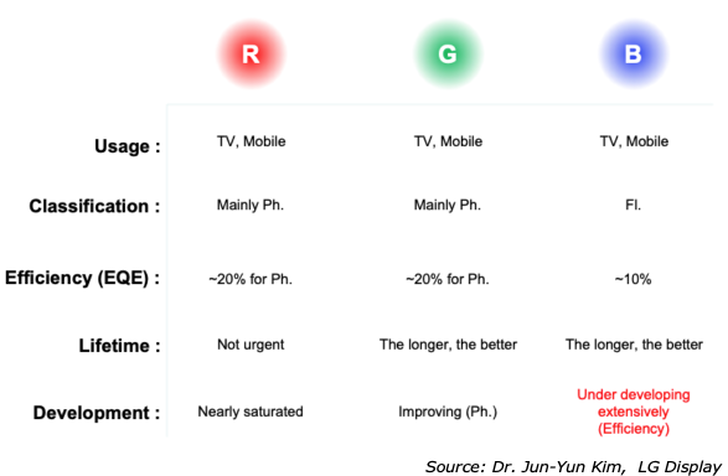 Karthik D, Kyung of Kyung Hee University presented a paper on a TADF blue, where he described the use of a multi-resonance boron based deep blue dopant that achieved an emission maximum of 452nm and FWHM of 21nm.  The result was an EQE of 26.3% and an LT90 of 93hrs at 1000cd/m2

One of the big surprises was the presentation by Jinwon Sun of Samsung Display, which described the use of a blue emission platinum(Pt.) complex, that had a wide FHWM. The broad spectrum was actually caused by CT state formed between n-type host and dopant. The paper concluded that over 80% of CT state could be reduced at the critical distance of 0.5nm, which should be further considered in designing host and dopant molecules for steric hindrance to avoid H-G CT. 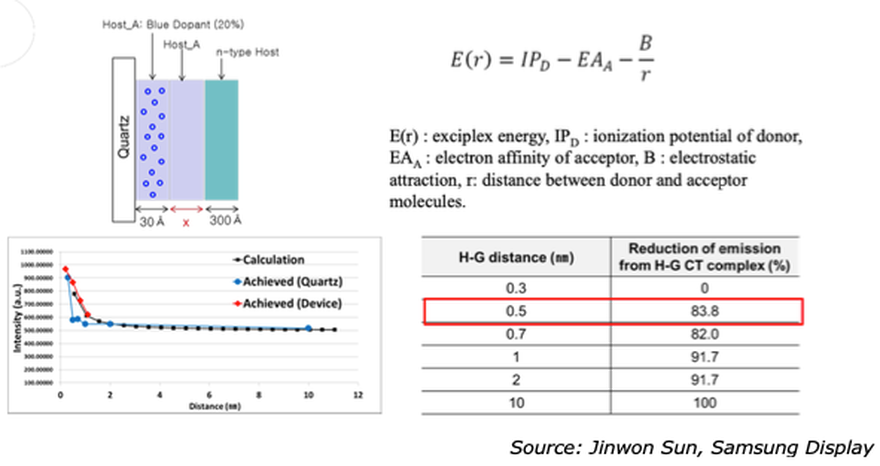 By redesigning the configuration for a narrower spectrum, the color purity of the blue phosphorescent OLED device was improved (30%) along with the EL efficiency (24%) and stability (5 times) of the OLED device as shown below. 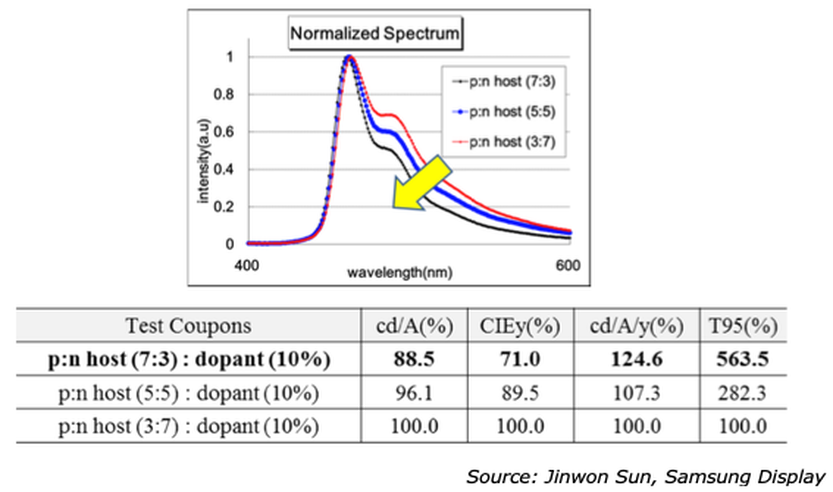 Apparently, the work by Samsung on a phosphorescent blue was regarding positively by the market and the UDC stock after dropping due to the reporting of a poor Q220 rebounded after the paper was announced.

Cynora and Kyulux are the leaders in TADF technology and both produced papers for the Symposium. However, only the Kyulux paper was available to the public at the time we looked for it. Kyulux CEO, Junji Adachi presented the current status. Of their emitters. As we have said in the past, the last time TADF material was tested by panel makers it used 5X what was required by phosphorescent material. The green uses about 2X the comparable phosphorescent material. What this means is that TADF must be ½ the PH green cost to provide a breakeven situation for the panel maker allowing the TADF supplier to add cost that would eat into the UDC royalty elimination.  But the TADF green would need to have better performance than the PH green, which it doesn’t. The Kyulux TADF blue is at 470nm and needs to be at 458nm, so any data provided is not very meaningful. 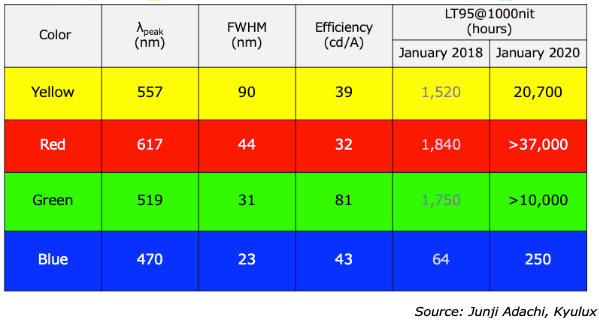 ​SID, similar to most other large organization (including CES in January 2021) held their conference in a virtual setting, where the exhibits, symposium, short courses and seminars could be reached on-line if you were properly authenticated and perhaps even without authentication. First the Exhibits; Display makers included


Musing’s Take: On-line exhibits don’t have the pizazz of great big booths demoing the latest and greatest, so, of course it was a disappointment. Most of the material in the “exhibits” seemed to be a rehash of videos already of the display makers web site. Also missing was Samsung, which had a fallout with SID about booth location a couple of years ago and even with the insignificance of location didn’t show. Neither did Sharp, Innolux, Kopin, INT nor any of the LCD only players in China.