Royole’s hinge folds completely flat, while the Galaxy Z Fold 2’s hinge leaves a small gap. Samsung’s hinge feels sturdier, with absolutely no creaking when folding and unfolding. The FlexPai 2’s hinge makes a sound every now and then.

Royole’s screen has less of a visible crease due to its different folding method, and its slightly larger (7.8-inch), 4:3 aspect ratio is more suitable for split-screen text-heavy apps. The FlexPai 2’s screen is more rectangular held vertically, with room to display content even with a full keyboard at the bottom. The Galaxy Z Fold 2 is more cramped due to its almost square shape. But the Galaxy Z Fold 2’s screen is just flat out superior tech. 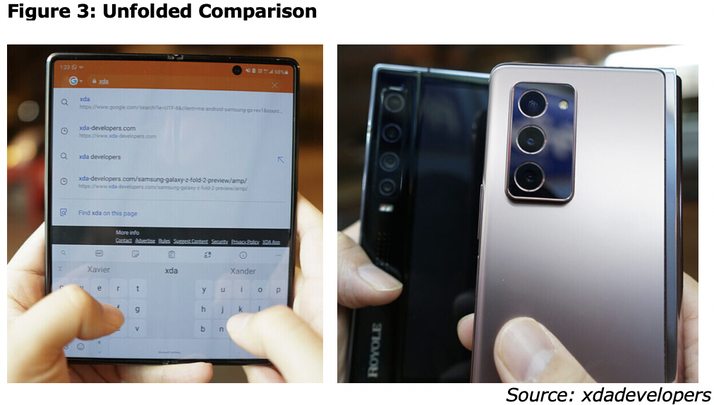 ​Cameras
The Galaxy Z Fold 2 has five cameras; a main triple camera system and two selfie cameras, one for each screen. The FlexPai 2 has a single quad-camera module that doubles as both, the main camera system and the selfie system.

The FlexPai 2 doesn’t fully support GMS because it’s a China-only device at the moment. YouTube, and Google Maps do work fine on the FlexPai 2, which implies there’s some semblance of Google Services framework inside the software.
Samsung’s software for the Galaxy Z Fold 2 works quite well, with the apps jumping from the smaller screen to the larger screen seamlessly more often than not. It’s even added letterboxing on the larger screen for apps that must be in rectangular form (like Instagram), so it doesn’t have any of the formatting issues of the Fold 1.

Combined with a better camera and brighter screen, the Samsung Galaxy Z Fold 2 is preferable than the Flex Pai 2. But, the Samsung and Royole are pursuing different goal. Samsung expects promotes the Galaxy Z Fold 2 as a mainstream product, sold worldwide. Royole sells the FlexPai 2 only sells in China, to showcase the company’s display tech rather than a mainstream phone. Galaxy Z Fold 2, shaped like a candy bar (or remote control) when folded, is a one-hand friendly device. The FlexPai 2 is wider even when folded up and more difficult to hold.