​There are five FPD fabs in Wuhan, including BOE’s G10.5 LCD (B17: for TVs) plant, Tianma’s G4.5 LCD (for small/medium-sizes, A-Si) and G6 OLED (for smartphones, LTPS base) plant, and CSoT’s G6 LCD (t3: for smartphones, LTPS) plant and G6 OLED (t4: for smartphones, LTPS base) plant. All of these are TFT/Cell and OLED process (vapor deposition) plants, and although the capacity rates differ, they have been operating continuously, even though the Lunar New Year.
Production was suspended for the module factories, and both Tianma and CSoT have bases in Wuhan. Both companies have received approval to resume operations, and production has been steadily growing since 11 March. However, the return rate of employees is still low due to various factors such as the lack of transportation methods (Wuhan has a population of 11m), and the current operating capacity this week is estimated to be around 20%. Assuming that there is no second outbreak of the virus, workers can return, and companies can secure necessary components, companies can deal with demand using components in stock). Full-capacity is expected to take by April or May. The Hubei province, which includes Wuhan City, has many factories for printed circuit boards (PCB), electric power supply, and metal components, and as factories in other regions of China are speeding up the recovery of plant operating capacity, a bottleneck is occurring in the production of electronic products such as TVs and audio equipment. 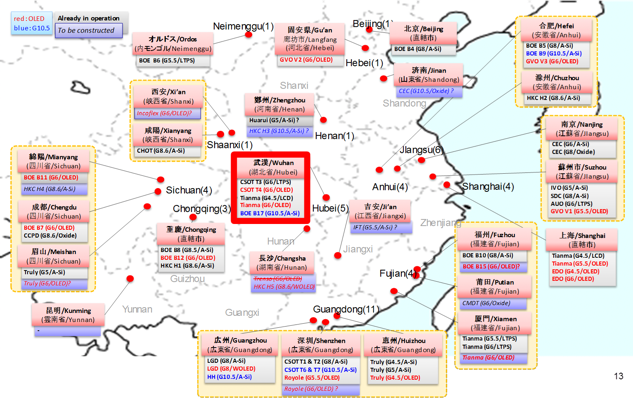 ​Reports from China indicate that smartphones and TVs bottomed in the second and third week of February on a Y/Y basis, and then entered a recovery phase from the fourth week. It appears growth in online sales is offsetting the slump in in-store sales. In Q120, volume declined by around 30% Y/Y (previous estimates were a decline of around 50%), and most believe the recovery trend will continue in 2Q onward. However, the recent recovery in demand, may not continue after 2Q, given the concerns of a drop in income, especially among small- to medium-sized and independent businesses.

Excluding the Hubei province, operating capacity has started an upward trend this week, due largely to the end of the observation period for employees returning from outside the province after the Lunar New Year, the efforts of individual companies, and the collaboration of local governments and clients. It appears that most of the large-scale companies in the tech manufacturing sector have seen over 70% of their workforce return (some report a return of over 90%). But the crucial operating (production) capacity rate is in line with estimates of around 50% in March. Aside from the companies with sufficient component inventory, there are some supply shortages for certain components, and the employee return rate is likely higher than the operating capacity. There are shortages in cover glass, metal processing components, heat dissipating modules, low-end passive components, and non-production related components (e.g., packing material). There is a downside risk of around 5m for iPhones in March, and Q120 production forecast of 37m (down 2% Y/Y) is unlikely. However, Apple hopes to regain the loss in 2Q. Expect production volume of 98m (down 31%) for the four Chinese majors.

The 2020 5G smartphone production forecast was dropped from 280m to 200m because of delays in the construction of infrastructure in the key market of China, the depletion of 4G inventory, and the delayed introduction of low-end 5G models. As the coronavirus spreads, consumption in Europe, the Americas, and Asia, will have a negative impact on sales and shipments of 4G and 5G smartphones. However, in  China there has been no significant delay in the schedule for 5G infrastructure, and on 10 March China Mobile placed a bid for a 5G facility, the central government and communications carriers are determined to push 5G infrastructure. If the current trend of smartphone sales recovery continues and 4G inventories fall (inventory levels appear to have dropped by around 20m between Jan and Feb, but there is still surplus), major brands may accelerate aggressive launches of 5G models.

Given the sharp decline in new coronavirus patients in China at present, there is a possibility that the shipment, delivery, installation, and operation of equipment for Chinese panel makers, which were expected to be delayed by around six months, will resume earlier than expected. Factories in Wuhan City (BOE: B17; CSOT: t4; Tianma: G6) will lag the rest but outside of the Hubei province such as Guangzhou (SIO: G10.5) and Hefei (Visionox: G6) there is a possibility that operations will start in April or soon thereafter. Excluding Wuhan, we think that the delay could be three to four months in the best-case scenario.
There is a strong possibility that the downside for demand for key complete products could spread to Europe/Americas/Asia. In South Korea, the domestic smartphone market has slumped, and Samsung Electronics is adopting a cautious stance. The worst-case scenario is that the current smartphone shipments (1.44b) could see a downside of over 140m (a decline of around 10% Y/Y). But given replacement demand, excessive pessimism is unrealistic, and it will be necessary to base future forecasts in actual demand (sell-throughs) in the Europe/Americas/Asia markets and key brand strategies.