Vertical Divider
Fifth Galaxy A Series Phone To Be Released By Samsung This Year
March 29, 2020

Last year, Samsung incorporated the J series into the Galaxy A series. The realigned Galaxy A series now comprises a wider variety of mid-range and sub-premium devices and caters to users who prize a smartphone’s looks and camera features over its performance. After launching several devices in the series – ranging from Galaxy A10 to Galaxy A90 5G – and even bringing mid-cycle upgrades to several of these devices in 2019, Samsung has already started launching the second generation of Galaxy A series devices. The latest one in the series is the Galaxy A31, which comes with a 48MP quad cameras, MediaTek Helio P65, 5000mAh battery, and Samsung Pay. The Samsung Galaxy A31 is the fifth A series phone this year. Samsung started the year by unveiling the Galaxy A51 and the Galaxy A71, followed by the Galaxy A11 and the Galaxy A41 launching earlier this month. In terms of design, the Samsung Galaxy A31 aligns with the “Prism Crush” design on the other phones in the bunch. On the back, it features a quad camera with setup in an L-shaped orientation, which seems to be Samsung’s design mantra for 2020.
On the front, there’s a 6.4-inch Full HD+ Super AMOLED Infinity-U display, which is an upgrade over the HD+ Super AMOLED display we saw on the Galaxy A30s. Just like the Galaxy A30s, the Galaxy A31 also comes with an in-display fingerprint scanner. The front-facing camera has also been upgraded from 16MP to 20MP. The quad-camera setup on the back appears identical to the Galaxy A51. It includes a 48MP primary camera, an 8MP wide-angle camera, and two 5MP cameras for macro photography and depth-sensing. 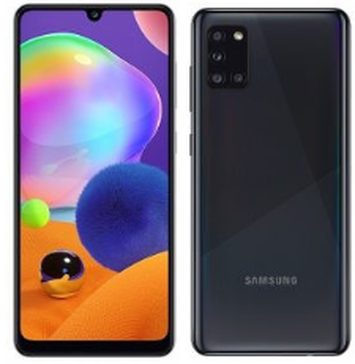 Source: Company
​
​In terms of performance, the Samsung Galaxy A31 is equipped with a MediaTek P65 SoC and comes in 4GB and 6GB RAM variants. The two RAM variants feature 64GB and 128GB storages, respectively. The phone also supports Samsung Pay but the availability of NFC or MST will vary as per the country. Onboard, there’s a 5,000mAh battery that supports 15W fast charging. In terms of software, the Galaxy A31 is expected to come pre-loaded with One UI 2.0 based on Android 10. Samsung has not revealed the price or the date of availability for the Galaxy A31 and the same will vary as per your country. It is available in black, blue, red, and white colors. 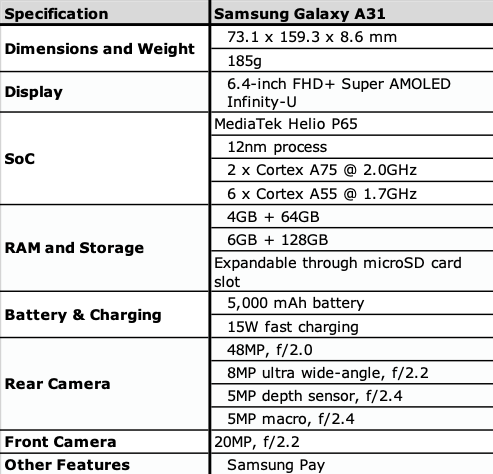