As the Chinese New Year holiday nears, the growth level in panel shipments in Q121 will moderate due to increases in demand for notebooks, tablets, and monitors since Q220, causing quarterly Y/Y comparisons to moderate as the year progresses, due to upward pressure on panel and CE device prices and production limitations causing shortages of semiconductor components.  February panel prices start the month up as semiconductor fabs allocate resources toward large, profitable devices, and turn their focus away from less profitable but industry ‘essential’ products.  A shortage of silicon capacity not only limits quantities, which in turn, limit end product production, but also creates situations where fab customers move from contract level negotiations to bidding wars that exacerbate the price situation.

In the display space, large customers ensure demand is met by increasing order sizes while smaller customers must pay higher prices.  As the cycle continues in February, panel makers wills face some limitations as to production levels causing   utilization rates to decrease as lower production supports large customers (shortage and seasonally related) to bring smaller customers, whose orders might have been backlogged due to large customer demand, up to quota.  This ‘gap filling’ will keep panel producers active during February, which is usually the slowest month of the year, as number of producers in China are offering high incentives and bonuses if workers stay on-site during the holidays.

Declining shipments will cause panel prices to rise in February, principally due to shortages than from demand.  Notebook panel prices are forecast to increase between 2.0% and 3.1%, while monitor panel prices up 2.6% and 3.0%.  TV panel pricing is more likely to be affected by component shortages to continue to affect production, particularly on the glass substrate and driver side as demand weaken a bit.  Samsung Display’s decision to keep its remaining large panel LCD fabs open for the remainder of the year helps capacity a bit, adding ~1m 55” TV equivalents back into the system this year, but that is less than 1% of total TV panel yearly production, so it is not a game changer, while substrate glass could see some allocation due to issues at NEG and Asahi.

As a result, TV panel prices could increase by 3.7% and 4.5% this month, despite the slower shipment growth, which would put aggregate TV panel prices 74.4% above the 2020 TV panel price low point, 75.6% above 2019 TV panel year-end price, and 8.3% above 2020 year-end TV panel prices.  While TV set pricing does not necessarily track panel pricing on a monthly or even quarterly basis, there is only so much component cost that set manufacturers can absorb and adding in the rising cost of base metals and other components, TV set manufacturers will have little alternative as to raising set prices.  While many new TV sets have been announced thus far this year, most of those sets have not been released, nor have prices 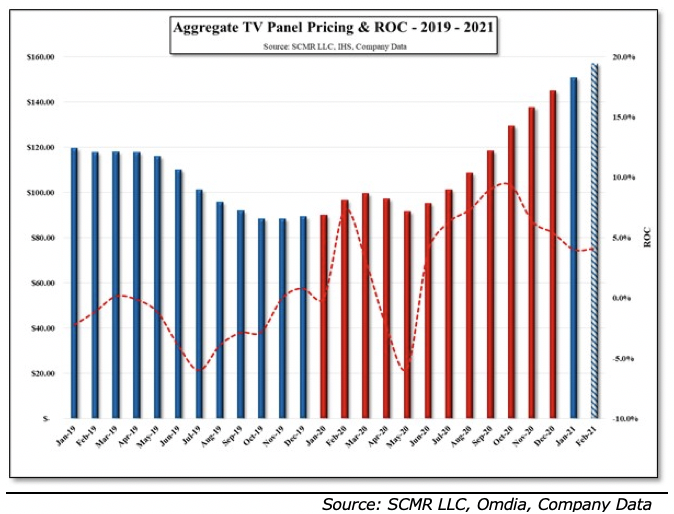