The smart glasses can take pictures, record video, listen to audio and take phone calls. They cost $299 pair of smart glasses, but they’re not really on the bleeding edge in wearable tech. The Ray-Ban Stories glasses come in four different styles, and a range of different colors, adapted from existing Ray-Ban frame designs. But they all share the same thick temples on  both the left and right sides of the glasses—where most of the onboard tech resides. A Qualcomm chip powers the glasses’ video recording and audio capabilities. The glasses come equipped with three microphones, a pair of small speakers, Bluetooth and Wi-Fi communication and two 5MP cameras. The cameras, placed next to the lenses right where normal Ray-Bans would feature small metal flourishes, are the biggest giveaway that these are smart glasses. A slim button on the right side of the glasses can be pressed to take photos and video (up to 30 seconds each), and a touch pad next to that can be used for simple commands like answering calls and adjusting volume. The glasses need to be paired with an Android or iOS device in order to listen to any audio or to retrieve photos and videos taken with them. The onboard storage should be enough to store person photos and videos without constantly needing to offload to a phone.
​
Saying the “Hey Facebook” wake phrase—same as what’s used for voice commands on Portal and Oculus Quest—lets a user tell the glasses to take a photo or video without using their hands. It isn’t a fully featured voice assistant like Amazon Alexa. 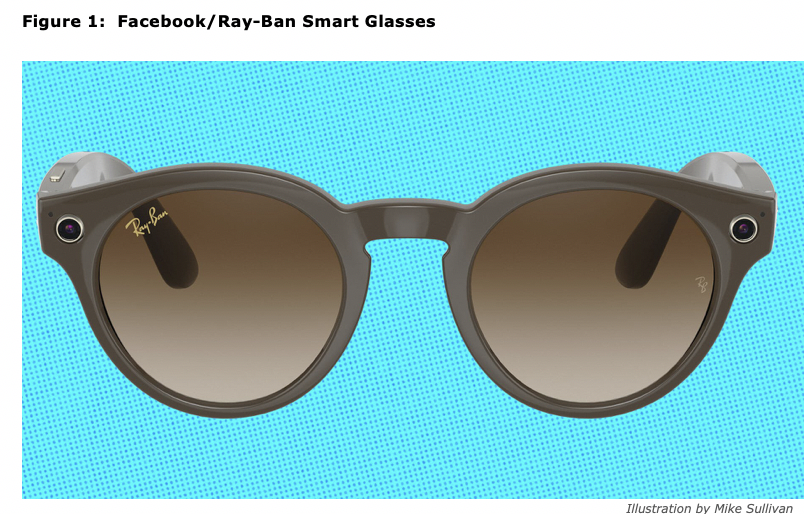 ​Adding premium lenses or a corrective prescription adds to the $299 base price.