​​Samsung announced the Exynos 2100, its latest flagship-tier SoC fabricated on a 5nm process node, in a bid to compete with Qualcomm’s Snapdragon 888. The new Exynos 2100 — unlike previous designs — does not feature Samsung’s custom CPU microarchitecture, making it the second chipset in Samsung’s Exynos to do so following the Exynos 1080. Samsung abandoned its efforts to design its own custom ARM-based performance cores following years of falling behind its competitors, though they’ve hatched a plan to design a custom GPU with AMD’s Radeon graphics IP. While the Exynos 2100 doesn’t feature an AMD GPU, it does bring much-needed GPU performance uplifts compared to the previous Exynos 990. The Exynos 2100 features ARM’s Cortex-X1 and Cortex-A78 performance CPUs. 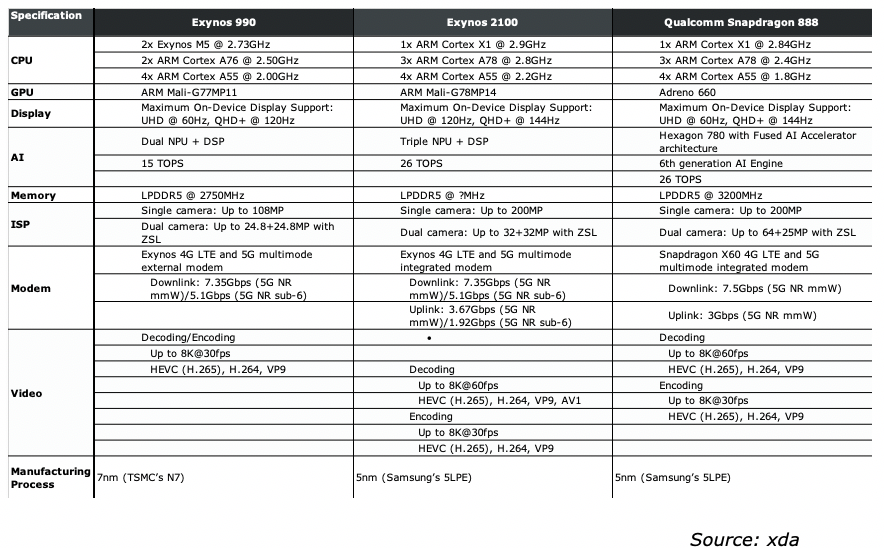 The Exynos 2100 has a 3 core NPU, and with the combined improvements in CPU, GPU, DSP, and NPU, the SoC achieves 26 TOPS performance, matching Qualcomm’s Snapdragon 888 and is a significant jump from the 15 TOPS achieved by the Exynos 990.
Qualcomm made a big deal about the Snapdragon 888’s triple ISP, which allows the SoC to process 3 signal streams simultaneously. The Exynos 2100 can handle 4 simultaneous streams, according to Samsung, and up to 6 image sensors can be connected. Samsung boasted that its ISP can handle 200MP image sensors, though there aren’t any sensors on the market that can capture 200MP images.
The Exynos 2100 supports AV1 decoding, making it the second mobile SoC after the MediaTek Dimensity 1000 to do so. AV1 adoption is progressing slower than we had hoped, but once Qualcomm adopts it, we’ll hopefully see more streaming services encode their content in it.
​
Lastly, the Exynos 2100 features Samsung’s latest 5nm integrated modem. The modem doesn’t seem improved compared to the one paired with the Exynos 990 but integrating it into the SoC should result in better power efficiency.