Electronics and Telecommunications Research Institute (ETRI) announced the
Fabrication of 12 micro LEDs in based on sequential processes: the "transfer process" and then "bonding process." The research team developed new materials, SITRAB6) adhesives, for use in combining the transfer and bonding processes into one process. The used an homogenized laser to the SITRAB film attached to the micro LED for a few seconds to develop the core process of simultaneous transfer and bonding7) to overcome the challenge. The homogenized laser is applied to a large area but heating up only the part for attachment to mount the micro LED on a display panel substrate; this technique enabled preventing the inconvenience of performing the transfer and bonding processes separately. The new materials were developed independently for micro LEDs and can be used with mini-LEDs.

ETRI claims the use of the material will lower the cost of the transfer and bonding equipment can be reduced, and the process can be simplified to increase the manufacturability. The materials can be attached to additional micro LEDs even when applied with laser several times for enhanced convenience of repairing the defective pixels8).

The micro LED, first presented by the research team was developed using a blue color and the prototype had 1,225 micro LEDs in 100mm2. The transfer and bonding material was imported from Japan  Using this ETRI-developed technology, the capex and process time can be reduced to 1/10 compared to existing techniques, and the material and repair costs and time can also be decreased to 1/100 or less.
Most blue LEDs are based on GaN technology, while green and Rred are not normally made using GaN. MicroLEDs made using different architectures complicates the  manufacturing process makes driving more complex. All microLEDs using regular LED technology get less efficient as they get smaller, but its worst for Red. 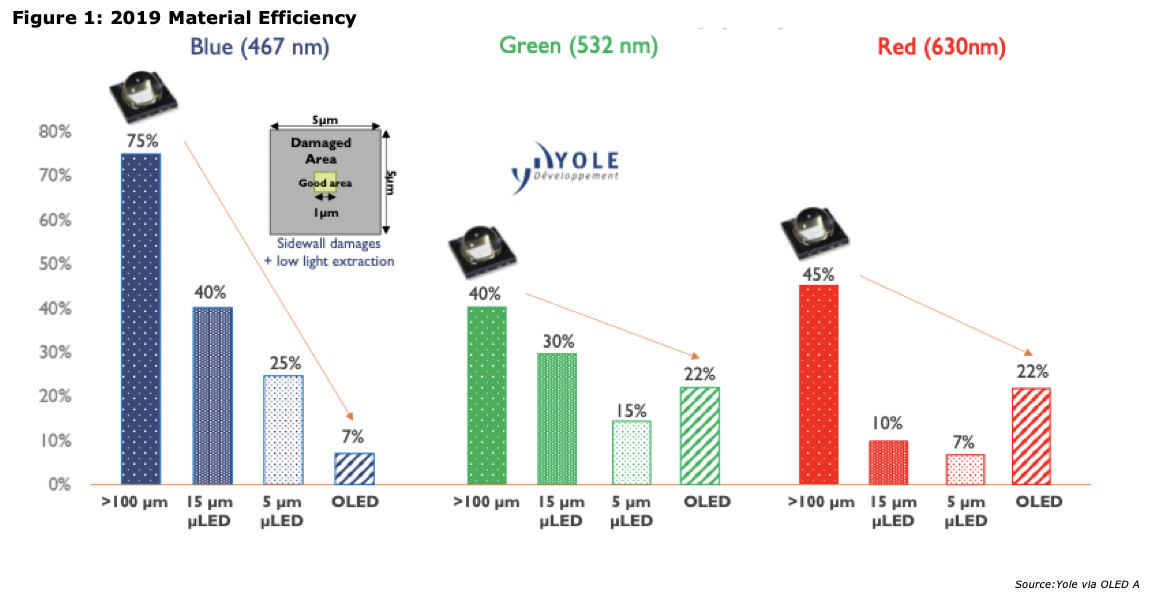 LEDs larger than 10um are judged to be too expensive for the smartphone and TV markets. One approach is to use blue GaN LEDs and then use colour conversion for the red and green, which would require QDs and a process to deposit them at low cost. Samsung uses an IJP to print the QDs.

The other approach is to make red, green and blue using GaN technology. Aledia, Glō, Plessey, Soitec and NS nanotech are working on the problem. The first three have been working on nanowire approaches so that the LEDs can be made on silicon but needs new semiconductor techniques. Ns nanotech uses MBE to fabricate its nanowires and is well along in producing nanowire based LEDs and has already produced non-blue GaN wafers. Nanosys' CEO, Jason Hartlove, has said, after buying the Swedish company, that Glō has great epi technology, but Zhu, from ETRI, pointed out that nobody is actually making the devices in volume yet and it can be really hard to get semiconductor makers to adopt new technologies.

Zhu says the fundamental difference in the Porotech approach is that it doesn't involve any change to traditional LED making techniques, although there is an extra step that Porotech performs. The technology in December (Porotech Offers Native Red LED Epiwafers for MicroLED Applications), but basically it exploits channel dislocations in the wafer and an etching process is performed to get etchant to flow into the material to make 'nanopores'. The LEDs can be made on silicon or sapphire platforms as it works on the InGaN layer, not the underlying substrate. 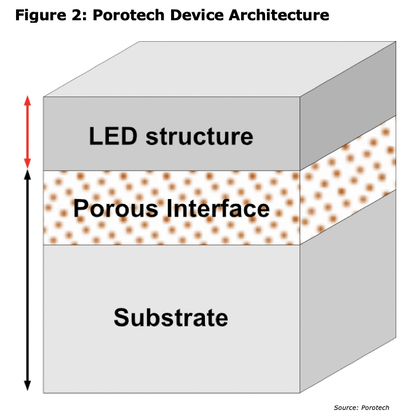 ​After the LED maker has designed and grown the epi layer on the substrate. The wafer is sent to Porotech which creates the porous layer in the epi material and returns the wafer to the LED maker to grow the LED device on top using normal MOCVD processes. Zhu said that the 'standard recipe' for making green LEDs turns out red LEDs after production using the processed InGaN wafer. In a press release, Porotech said that it is first targeting microdisplay application, that is to say not individual microLEDs but monolithic displays.