The VR/AR revolution has not materialized as expected by the illustrious leaders of Facebook, Apple, Google and just about every market researcher that has had to drop their forecasts year after year.  In 2019, 6.9m headsets were shipped down 9.2% from IDC’s most recent forecast and down more than 50% from previous more optimistic forecasts. But the optimism remains as the major companies and an array of start-ups cumulatively invest billions in the technology. Even with the misses, IDC now forecasts 52m headset by 2022, a 3-year CAGR of 96%. What’s at stake is a new paradigm in consumer and commercial computing. If we are to believe the Cook’s, Zuckerberg’s and Pichai’s, the smartphone and the TV will be replaced by an ergonomic pair of glasses that deliver the digital and analog world simultaneously in harmony.

Figure 1: Forecast of AR/VR Headsets by Consumer and Commercial Use 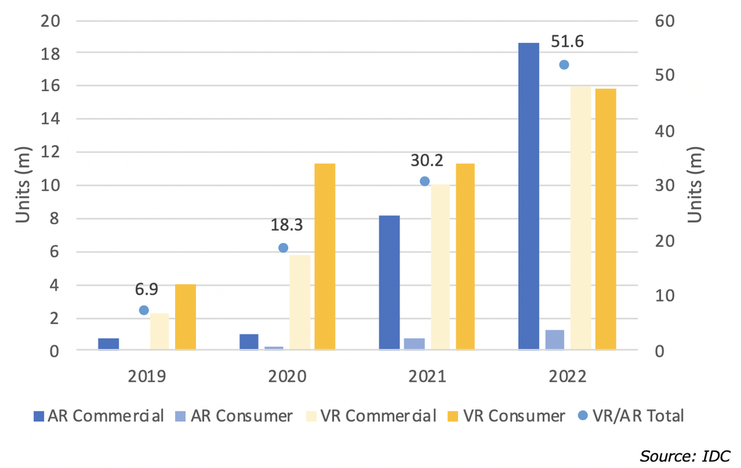 Of course, the technology is not ready. Small standard high pixel density OLEDs have enabled VR but their ppi and luminance limits are insufficient for AR, which must operate in high ambient daylight. OLED micro displays have been tried as they overcome the ppi limitation but the use of white emission with a color filter limits the brightness. MicroLED micro displays have been hyped as future solutions, but the costs and technical issues have delayed any product introductions.
eMagin, a small OLED microdisplay manufacturer may preempt the over hyped Micro LED by solving the luminance and pixel density issue. They recently announced an OLED micro display with RGB stripe pixel layouts that used no color filters and produced  ~7,500 cd/m2, the starting point for A/R devices The 0.9” display has a resolution of 1920 x 1200 and a ppi of greater than 2600. eMagin uses direct patterning of the OLED emitter layers as opposed to previous designs, which used white (R,G,B) with a color filter.  Kopin recently announced a high brightness OLED microdisplay but they used a duo structure, or two layers of each red, green and blue emitter to plus a color filter to achieve 1,000 nits[AG1] .
eMagin used a phosphorescent green and red and fluorescent blue materials. They were able to produce 1920 x 1200 devices on an 8” wafer with a 9.6µm as well as 9.3µm color pixel pitch. The devices achieve 6X more luminance at comparable current density and 20X more luminance at comparable voltage. Andrew Sculley, eMagin CEO indicated that their next goal was >10,000 cd/m2 in full color and could go to higher than 25,000 cd/m2, eventually. Andrew reported that 2 large well known OEMs had already contracted with eMagin to develop prototype VR devices. In a presentation at the 2018 OLED summit CEO Andrew Scully compared the 2 device structures and stated that current density and voltage vs. luminance shows 5 to 10 fold improvement using the direct patterned approach.

In Andrew’s 2018 presentation, he also included the linear relationship between luminance and the current passing through the array. 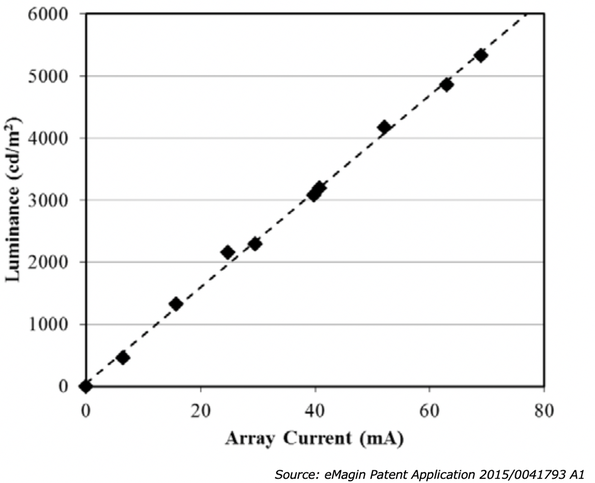 eMagin used stencil lithography, which employs a high resolution SiNx mask placed over the substrate providing the RGB pattern.  A VTE tool then is used to deposit the organic material through the nanometer scale matching the underlying transistor of the microdisplay. SiNx is deposited using CVD equipment to produce an etch barrier on one side and membrane on the other side of the wafer. One side of the thin film is patterned and etched to expose the substrate for a subsequent through etch process. The other side of the film is patterned and etched to create the shadow mask. The through substrate etch on the back side suspends the film, so it can be used as a shadow mask. Accordingly, the result is a near 1:1 transfer onto the underlying substrate, with the shadow mask pattern at 6µm and the width of the transferred pattern at 5.9µm. The pattern sizes depend on the target display and eMagin is experimenting with both higher and lower pixel densities. 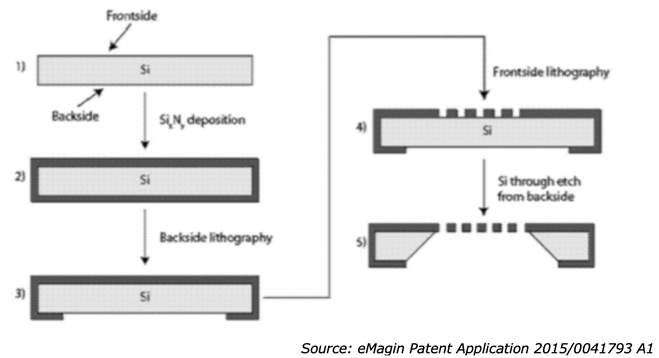 Similar to other forms of deposition, material builds up on the sidewalls of the shadow mask and can cause distortion in sub-pixel size, which can be altered as the ratio between film thickness and aperture opening increases. In this patent, the shadow mask ranged from 50Å to 2µm  eMagin used sloped sidewalls using the anisotropic etch of the silicon substrate to produce the membrane geometries. eMagin used a through wafer etch of a 315µm thick wafer and an additional 446µm was added for membrane geometry.

The new process was given the name dPd to distinguish it from the color filter approach. At eMagin’s, Q120 earnings call they said, “Direct Patterning equipment has been upgraded and installation is complete. We are in the process of qualifying the equipment and validating the process. Progress has been very good, despite vendor delays due to the corona virus. We are expecting to fabricate full color displays in the second quarter.” With the announcement of the 0.9” micro display, they will have met their commitment. The following figures show the lithographic patterning process 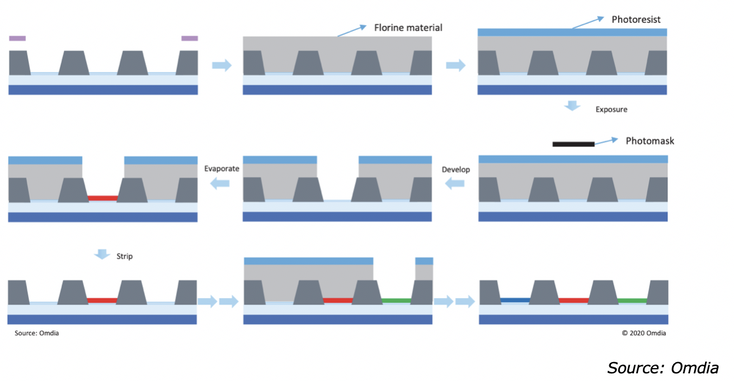 Many thanks to Ross Young, founder and CEO of DSCC, who wrote about Andrew Sculley’s  presentation at the 2018 OLED World Summit and researched the patents enabling the direct patterning technique
​