Electroluminescent QD’s Touted but Far From Ready
May 24, 2020

Demand for RGB fine-pitch mini LED displays and mini LED backlight units was expected to take off in second-quarter 2020 following CES 2020, but corresponding shipments will be significantly short of expectation in second-half 2020. Major sports events originally scheduled for 2020 have been canceled due to the coronavirus pandemic and consequently, shipments for fine-pitch mini LED displays originally scheduled for first-half 2020 have been canceled or deferred. For mini LED backlighting, Micro-Star International (MSI) has launched Creator 17 17.3-inch mini LED-backlit notebook, and Asustek Computer and Acer plan to launch 32-inch mini LED-backlit gaming monitors. However, the devices are meant to be more of a demonstration of their technology, for prices for mini LED-backlit products are 1.5-1.75 times those for regular LED-backlit or OLEDs. So far, no shipments for mini LED backlight units have been scheduled for third-quarter 2020. LED epitaxial wafer and chip maker Epistar expected the revenue proportion for mini LED to rise to 15% at year-end 2020, and vertically-integrated LED maker Lextar Electronics estimated that mini LED would take up 5-7% of 2020 consolidated revenues. LED driver IC design house Macroblock indicated that its South Korea-based clients plan to launch RGB fine-pitch mini LED displays such as 80-inch models in second-half 2020.

Peter Palomaki is the owner and chief scientist at Palomaki Consulting, a firm specializing in solving big problems at the nanoscale. His utilizes his expertise in quantum dots and materials chemistry to solve challenging problems with clients large and small. He has been a longtime advocate of quantum dots and often writes knowledgeably about the technology. The following is an abstract from an article in Display Daily written by Peter.

Samsung and Nanosys have both reported on their blue EL-QLED progress in the past year. Nanosys presented impressive numbers at SID Display week 2019 with >12% efficiency of a ZnTeSe EL-QLED device with a T50 of about 100 hours at 100 nits. That’s 50% emission after only a few days! This as a success since most blue QD-OLED devices are far worse than that! One great feature about ZnSe-based QDs is that they have very pure color emission, with a peak width (FWHM) of around 20 nm. Samsung has also reported they are working on a ZnTeSe alloyed QD with similar properties (narrow peak width, high quantum yield) but have not yet reported any device performance other than to say it is >10% efficient. 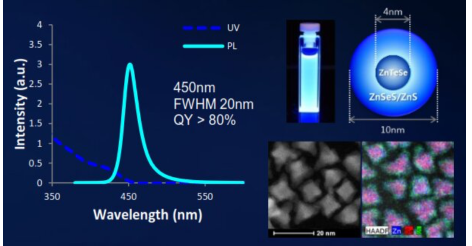 Source: Company
A recent paper from Hongik University details a similar ZnTeSe QD material with nearly 10% efficiency. They also use a unique set of materials in the stack that may help lead to the impressive performance.  Chances are the lifetime is poor, but I argue that is ok (for now) as we are making good progress in two other important categories.


Figure 2: Blue EL-QLED Device Created At Hongik University And The Materials Used To Create It.

Source: Company
Compared to just a few short years ago, the field of Cd-free EL-QLED performance has come a long way in a much shorter amount of time than Cd-containing EL-QLED and OLED. Here is where we stand in these three important categories.

Of course, I have over simplified the by providing only three metrics, as there are many other important factors like manufacturability, toxicity (non-Cd would be ideal), and the need/desires of the consumer.

Given the most advanced metrics, which was T50 at 100 hours with an initial luminance of 100 nits, how optimistic should QD advocates be? Looking at today’s Fl blue the performance specs in a device (Galaxy S20)are:


The Nanosys paper was obviously not for an existing product nor did they specify how it was tested. But assuming it was a precise measurement, we can try to compare the current performance of blue emitting QDs and blue OLEDs. Using a well-accepted rule of thumb that for every increase in 1 nit there is a two-fold decrease in lifetime, the blue QD T50 would drop from 100 hours to around 4.2 hours and if the degradation was linear, T97 would be around .25 hrs. or 15 minutes.

Comparing the lifetime to the blue in AMOLEDs, when they were first introduced by Samsung in 2007, the blue Fl material was reported to have a T95 lifetime of 150 hrs. at 500 nits, initial luminance. Electroluminescent blue QDs are likely 5-10 years behind blue OLEDs, as they were in 2007.
​