Vertical Divider
One reason for the availability of the mmWave spectrum in the 21st Century was that signal does not travel far and higher frequencies may not penetrate structures. The signals are easily interfered with, even the hand, which is problematic for a device held in the hand. mmWave frequencies are not only knocked down by solid objects, but by rain, fog, and a small slice around 60 GHz is absorbed by oxygen. MasTec (MTZ), a telecom construction company recently said "5G buildout is going to be much more complex than anyone imagined, even a few months ago," referring to the distance and penetration issues creating connectivity problems in the real world. Therefore, mmWave will not exist outside of cities, because of the distance issues. The plan here is for upgraded LTE on all those towers - 5G Lite. But inside of cites, getting a 5G signal is problematic because of the distance and penetration issues. So, most of the time, even city dwellers will be on 5G Lite until the density of radio towers is much greater. For handheld mobile devices, the mmWave signal will not be able to penetrate it and a case adds an additional layer to penetrate. Qualcomm's design solution is three or four large RF antenna modules that sit perpendicular to the motherboard on each edge of the phone.
Ron Amadeo at Ars, reports on the Snapdragon 855 system-on-a-chip (SoC). 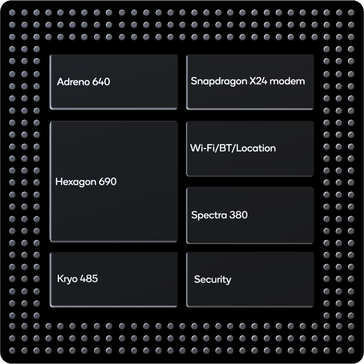 The upper-right block Qualcomm's LTE modem, which is not needed for LTE connectivity.  Qualcomm commented that 5G smartphone design is going to be "exponentially" more complex than LTE design. For an LTE Android phone, the Snapdragon 855, and likely antennae that snake through the motherboard are required. But for 5G, the x50 modem chip be required and 3-4 RF antenna modules. The x50 plus a single antenna module take up more space than the entire SoC. 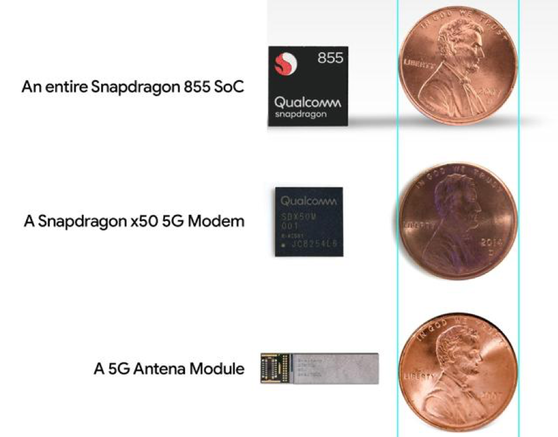 Qualcomm uses pennies to show how small their chips are, so Ron used that to create this to-scale image. Combining the x50 chip size and the antenna modules is shown below: 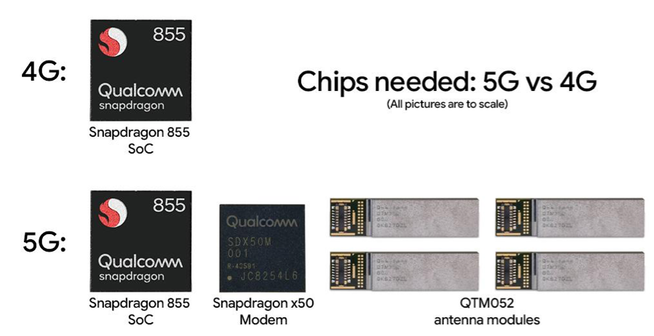 The reference design that Qualcomm released in December has three of these antennae (the Moto Mod 5G has four). 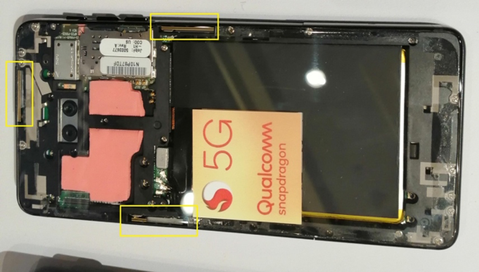 Click on that photo to enlarge it to see the antennas are perpendicular to the motherboard and surrounded by a plastic edge, not metal as most smartphone designers use to increase rigidity and prevent bending, because metal will knock down the mmWave signal, so the edge needs to be glass or plastic. No matter how the user holds the phone, at least one of the modules will be exposed, even if the others are blocked. Comparing the space utilization for a 5G vs. 4G phone means taking space used for the battery, using plastic, which could lead to another bendgate, and eliminating tapered edges. For example, here's what that 3.5mm jack looks like inside the Samsung Galaxy S10 5G (red rectangle).

iFixit shows an iPhone where batteries take up the lion's share of space (XS on left, XS Max on right). 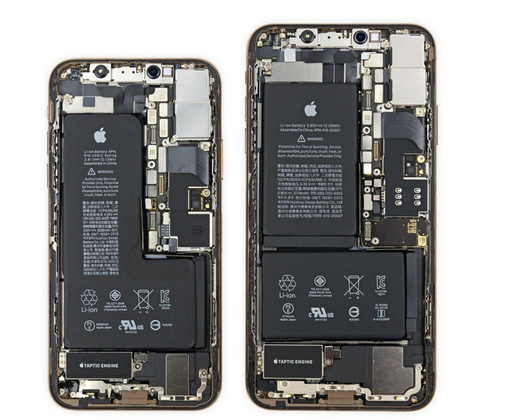 Moreover, since the tiered battery design of the MacBook, Apple is getting more creative in filling every cubic millimeter of space with battery. Since the iPhone X, Apple uses a 2-sided, 2-layer PCB sandwich (4 sides all together) for its motherboard to save space. The front side of the bottom board is where the RF action is.

​Source:iFixit
The red rectangle is Apple's WIFI/Bluetooth chip, and the orange square is Intel's LTE modem. Both take up quite a bit of space, and the Apple chip team is working hard on getting those modules into the next iteration of the A-Series. Apple wants to put less hardware on their motherboard but adding the x50 plus 3-4 antenna modules moves in the opposite direction.

Samsung uses their own 5G chip, not Qualcomm's, but the compromises that a team with a decade of smartphone design experience had to make are telling. So, the Galaxy S10 5G is a giant, even by Samsung standards.

Samsung 5G smartphone was released in Korea, where the 5G networks are somewhat more mature than in the US. It won't be available in the US until May. The battery gets a 10% bump in storage with some of that extra volume.  Verizon is advertising 44 hours of battery life versus the Plus' 40 hours, a 10% bump like the battery capacity. But the 5G chip and the large battery it needs drove all the other design decisions, there are two teardowns: one from the PBKReviews YouTube Channel, and one from Tech Insights. The former is more geared towards repairs; the latter is more technical, and they are still working on it. The last update was 4/15. Look at Samsung's radio hardware. They have adopted the PCB sandwich like the iPhone. First, the back side of the main board: 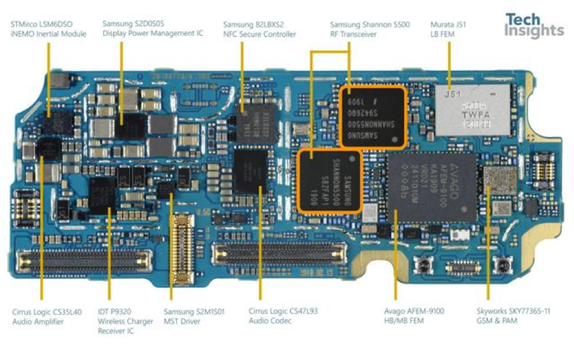 In contrast to the S10 Plus with one, the S10 5G has two of Samsung's Exynos RF 5500 transceivers, squared in orange. These chips do all cellular radio up to and including upgraded LTE, AKA "5G Lite," AKA "Fake 5G," AKA "5Ge," but not mmWave; everything on these chips is in the sub-6 GHz portion of the spectrum.
On the other slice of the sandwich, is a Samsung's Exynos RF 5100 (green square), which does everything, up to and including mmWave. The other side of this board is quite empty. 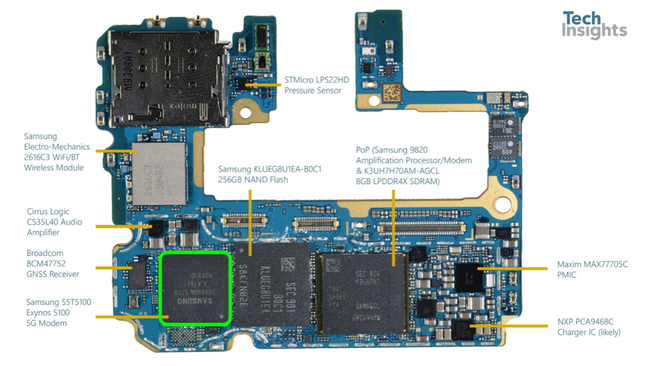 
If the RF 5100 supports everything from 1G to 5G, why do they need 2 of the RF 5500s? There are no antennae modules anywhere so perhaps Samsung solved this thorny issue. Also, the S10 5G has a much thinner metal bezel on the exterior edge than the S10 Plus, and I imagine this has something to do with the 5G antennae. 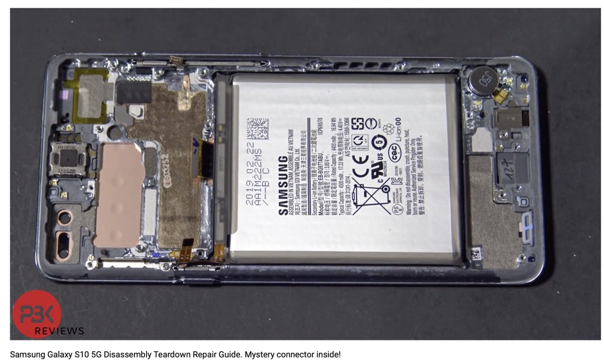 The odd shape of that second board leaves a lot of empty space in middle of the PCB sandwich, and the other side of it (not pictured) has very few components and a lot of empty space, indicating that perhaps the components on the boards pictured side are power-hungry beasts, kicking out lots of heat, and the likely culprit is the RF 5100. The side of the board with the RF 5100 has two layers of heat shields, the top one in contact with the backplate, acting as a heat sink. The S10 Plus has just one more typical heat shield on its chips. The RF 5100 needs its own heat sink.
It looks like Samsung decided to design it like the internals of the A12 SoC, where Apple has 4 low-power cores for most things, and 2 high-power cores when needed. The phone will use the RF 5500s 99% of the time, because consistent mmWave is unlikely any time soon. This is a mmWave phone, but Samsung is counting on that RF 5100 being used infrequently.

The only capacity that both phones currently come in is the 512 GB. The S10 Plus is $1,250 and the S10 5G is $1,400. Tech Insights estimates of the bills of goods, it seems like they will have similar gross margins, though there was also likely extra capex and manufacturing costs on the S10 5G that are not counted in the bill of goods. In any event, more or less a wash on margins.
Qualcomm will reduce the space and orientation needed for those antenna modules in their next generation. Moreover, streaming 4K video, which is the most demanding use-case in the near term, uses a tiny fraction of LTE bandwidth. If HVEC ("MP5") becomes more common, it will be an even tinier fraction.

There are now 13 5G smartphones devices and 11 brands with Qualcomm the chipset of choice for all but two smartphones, produced by Huawei using the Balong 5000 chipset produced HiSilicon. 10 use the latest Snapdragon 855 set with the X50 modem, with only the Nubia Mini 5G using the Snapdragon 850.  From: Seeking Alpha