Vertical Divider
DSCC puts 48” OLED Cost at $500/panel in 2020 and $310/panel in 2021
July 05, 2020
​
DSCC released its Q2 2020 update of its Advanced TV Display Cost Report, for OLED and LCD panels including new manufacturing configurations of 48”/77” MMG and 55”/65” MMG OLED in China, 55” and 65” 120Hz LCD, and six different 8K TV models in LCD and OLED. The following figure shows their costs of a bottom emission 48” OLED panel built using MMG.  This process is currently in use in Guangzhou and the TVs have been announced by Sony and LGE, so it is a particular interest at this time. DSCC shows the costs from 2020 to 2024. We reconfigured the DSCC data, starting in 2021, which allowed us to leave out the start-up costs, lower production yields in 2020.

Determining the panel cost of an OLED is highly dependent on depreciation, which is the largest part of the panel cost, as opposed to LCDs, where material costs have the largest percentage. In this case, depreciation was relatively constant around $85 per panel. Depreciation allocated to the panel can take various forms depending on the accounting approach:Given DSCC’s apparent approach, the total capex for the Guangzhou fab calculates out to ~$4.5b. It had been reported to be ~$4.2b by the media. DSCC previously reported the Chinese Government’s subsidy contributed 65% of the capex for a 30% share of the fab. Given the subsidy, the actual depreciation charged on LG’s financial statement is likely ~$30 instead of $85. In addition, the module costs are relative constant from $55 in 2021 to $53 in 2024. These costs typically drop by 8-10% per year. In reconstructing these charts, we had to hand measure the length of each bar, which could have caused small variances from the originals.

DSCC also compared the cost of 65” panels built on LG’s Gen 8.5 Gen OLED fab with a QLED panel built on a Gen 10.5 fab in China. After 2020, when the LG fab had low start-up volume and low yields, the OLED cost dropped to ~$90 or 20% higher than the LCD QLED. The expected advantage of the Gen 10.5 seems to have dissipated with the use of MMG. 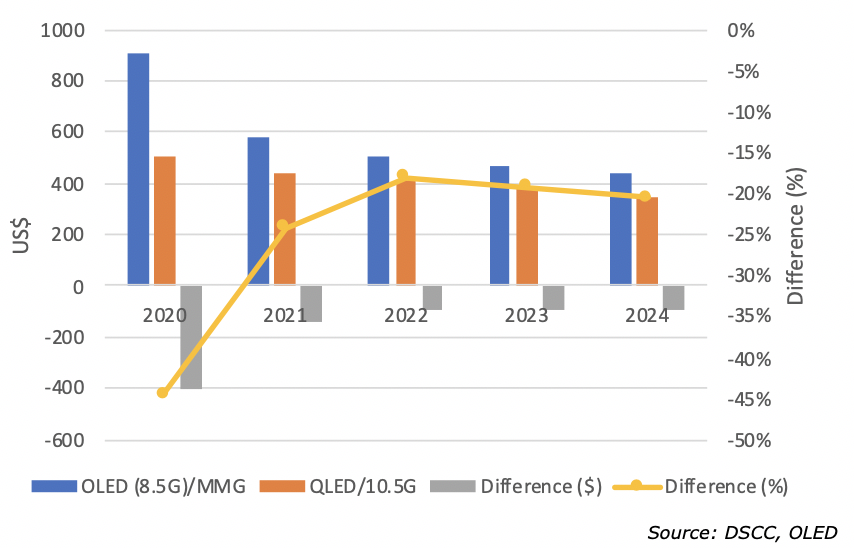