The U.S. Department of Justice plus 11 state attorneys general filed an antitrust lawsuit against Google and every single one of its nap pods. The U.S. government hasn't brought an antitrust case of this size since it tried to chop up Microsoft in 1998. The DOJ says Google abused its market power to stifle competition. 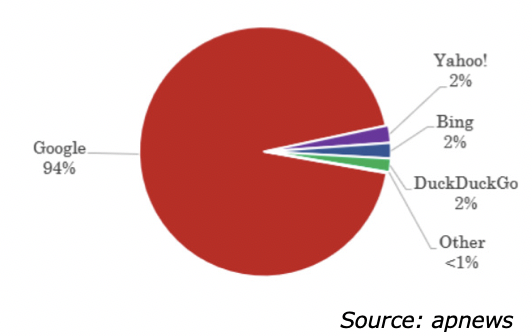 The complaint boils down to a bunch of contracts, most significant is Google paying a purported $8-$12 billion a year to Apple to make Google the default search engine across all Apple devices and Siri (3.7% of Apple’s TTM revenues). It is 13% of Google’s cost-of-goods-sold in the TTM. In such a narrow suite, remedies will be likely to be limited, along the lines of prohibiting default search engines, and giving users a choice at setup. But given a choice, consumers will still flock to Google. These deals are other companies taking advantage of Google, not the other way around. If the example of the Microsoft (MSFT) trial in the 1990s holds any lessons, the foremost are these: it will take a very long time, there will be many twists and turns, and at the end, the tech landscape may have evolved to point where the original complaint seems a little beside the point.

The case illustrates how a user is unknowingly introduced to a Google ecosystem from the moment they set up their device. It also mentions bloatware, stating that “Google requires some of these apps to be undeletable from the device, regardless of whether consumers want them”. 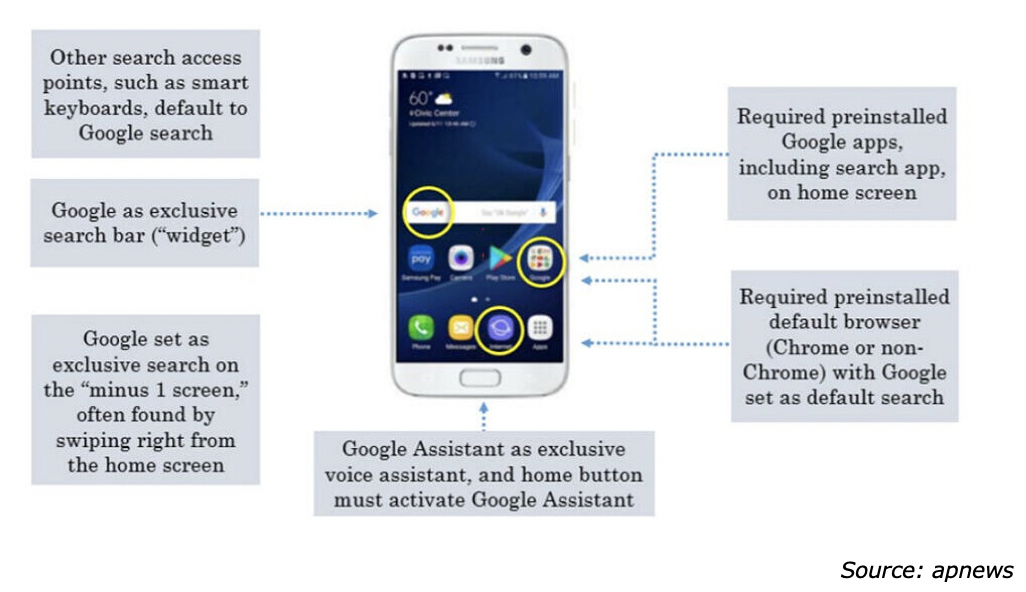 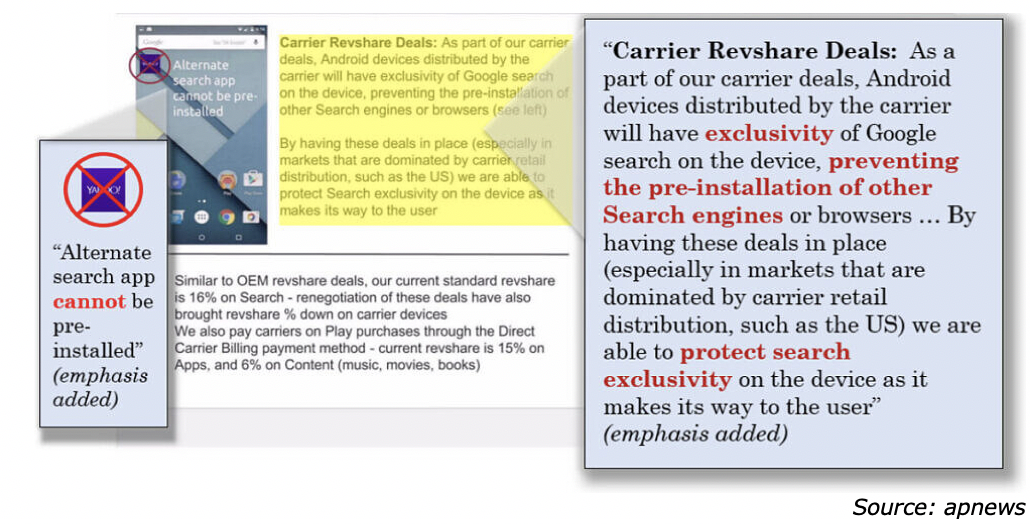 ​The suit also mentions that “through these interlocking, anticompetitive agreements, Google insulates and protects its monopoly profits.” One internal analysis of these restrictive agreements concluded that only one percent of Google’s worldwide Android search revenue was currently at risk to competitors. This analysis noted that the growth in search advertising revenue from Android was “driven by increased platform protection efforts and agreements.” AOSP may be free, but there are a number of agreements that make it impossible to effectively ship Android without Google’s involvement.

Apple accommodates Google’s search denial, as, after a 2018 meeting, the document states that a senior Apple employee wrote to a Google counterpart: “Our vision is that we work as if we are one company.” The suit estimates that 15-20% of Apple’s yearly income is said to be as a result of payments Google makes to Apple to be the default search provider on Apple devices. Apple does not have its own search engine, and Apple’s Siri makes use of Google. In exchange for this privileged access to Apple’s massive consumer base, Google compensates with Apple billions of dollars in advertising revenue each year, “with public estimates ranging around $8–12 billion.” The suit mentions that Google entered into an agreement in 2005 when Apple began to use Google as its default search engine in its Safari web browser. In return, Apple was given a “significant” percentage of Google’s advertising revenue derived from Apple device searches. Two years later, this was extended to iPhones, and then in 2016, extended to cover Siri and Spotlight. (Spotlight is Apple’s system-wide search feature.) Apple’s devices make up 60% of the mobile market in the U.S., and Macs account for 25% of the computer market in the US.

Google has faced numerous antitrust battles in the European Union as it was forced to provide search provider choices for Android users in the EU after the European Commission ruled that Google had “imposed illegal restrictions on Android device manufacturers and mobile network operators to cement its dominant position in general internet search”, and subsequently fined the company $5 billion. After the ruling, Google announced changes to how it did business in the EU, allowing partners to build smartphones with forked OS builds for the European Economic Area, and introducing a new paid licensing agreement for smartphones shipped to the EEA, among other changes. Google later announced it would present additional app options for Search and Browser on smartphones for users in Europe. Every time a user selects one of the alternatives, Google will receive a fee. Google Search may not be used by as many people, but the company is still making money off of every user whenever a user selects an alternative search browser. They are also shown in random order, so as to not potentially favor one search engine over another. This did not solve every problem though, as DuckDuckGo called the solution a “pay-to-play auction in which only the highest bidders are on the menu.”.

Google blogged that the DOJ's case is "deeply flawed" and, if successful, would hike up phone prices and force inferior search products onto consumers.

Still, this is just one front in a broader U.S. v. Google scuffle. Texas Attorney General Ken Paxton, for one, is crossing the t's on a complaint about Google's commanding presence in the digital advertising market.

It's unclear whether or not this lawsuit is the beginning of the end of Google as we know it, but it's a historic day for the U.S. government's relationship to big business.