DSCC issued their Q3’20 version of its Quarterly Display Capex and Equipment Market Share Report, which upgraded 2019-2024 spending by 5% on an install basis on a number of new fabs added in China. Whatever changes were made reflect the pushing out of investment due to COVID-19. Other than what is already in motion, the display industry has insufficient demand to encourage investment even from the most optimistic participants. Smartphone sales have peaked, TVs are growing at no more than the traditional 1or 2% per year, notebooks and monitors after years of decline are seeing some growth that is believed to be brought on by the virus, which hopefully will end soon. The most discussed application is AR goggles, which if they were ever to be non-intrusive and light enough, while providing all the services promised could decimate the need for displays in general.
China is expected to account for 84% of 2019-2024 LCD and OLED spending. China’s share of LCD spending will be 100% and its share of OLED spending will be 76%. Other highlights include:
Figure 1: OLED and LCD Capex Forecast 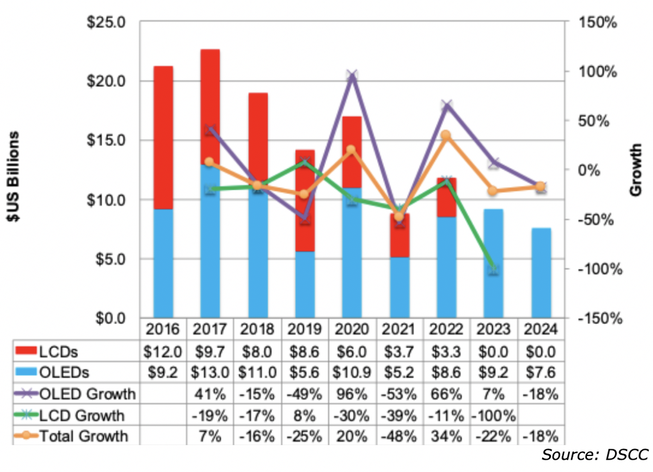 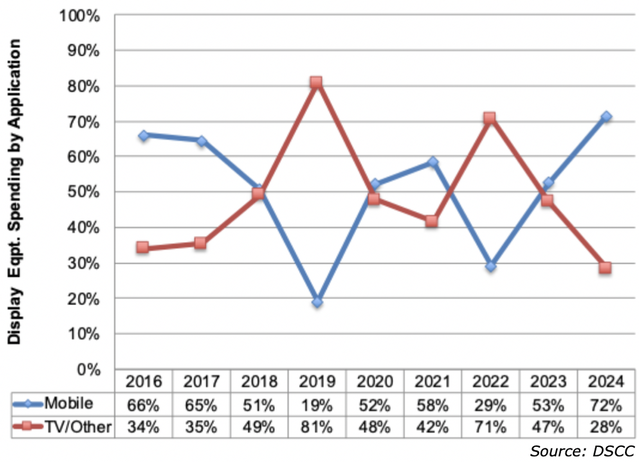 The difference between move-in and install are widening in 2020 due in part to the quarantining of Japanese equipment engineers as well as HKC’s delay. We reduced 2020 install spending by 17% vs. last quarter and increased 2021 installs by 14%. OLED spending is expected to rise by 96% in 2020 with LCD spending down 30%. Mobile OLED spending will rise by over 240% as many more OLED fabs are equipped in 2020 despite the current oversupply in mobile OLEDs. In terms of equipment spending by application, mobile was 19% in 2019, but it is expected to account for a majority of spending in 2020, 2021, 2023 and 2024. TV spending is expected to decline in 2020 and 2021 before rebounding in 2022 and declining in 2023 and 2024 as OLED TV pending remains lumpy.

No matter how the changes in Capex are positioned, the display industry has plenty of capacity for LCD large area and OLED small/medium displays. LCD capex in 2020 was $6.0b and will average $3.5b for two years and then zero after that.  Small/medium OLED growth is a function of the Chinese trying to catch up with Samsung, in an era, where Samsung’s flexible fabs have averaged 50% utilization over the past 2 years.  The news is bad for panel makers; OEMs are adopting OLEDs, but Chinese OLED panel makers could double their capacity by raising yields to 70%.  The industry is headed to a glut that will drive prices down and make LTPS LCD S/M fabs operate at below cash cost even as these fabs are mostly fully depreciated.