The LCD TV panel industry has a long history of making incremental improvements in performance and lowering costs.  Over the last 5-years, the attention has been in two areas: Mini LED technology closes the contrast gap with OLEDs, not 100% but substantially depending on the image. A pure white or black is close, but there are variances in Mini LED contrast ratio between the two extremes. This improvement  is not attributable across the board as Mini LEDs still suffer from halo effect, lower color performance, high response time, flicker and higher blue light levels. Mini LEDs also introduce higher costs in the range of $100 to $250 in the BOM, depending on the number of LEDs per backlight. The revenue from the new backlight does necessarily accrue to the panel maker, if the set maker buys the backlight.

After TV set makers launched Mini-LED TVs, TCL’s Arron Drew blogged to say how unsurprised he was that other brands were turning to the Mini-LED technology given that TCL introduced the technology for TVs in 2019. He went on to describe OLED as technology “that hasn’t notably changed since it was first used in TVs in the early 2010s, and still only accounts for less than three per cent of global TV sales.”  Dew’s OLED-dissing comments were self-serving given that OLED TVs:


TCL hopes that Mini-LED technology will be a clear and present challenge to OLED’s self-emissive attraction. But the TCL’s Mini-LED TCL models released don’t compare with OLED’s pixel-level light control
Mini-LEDs being at an early stage of development do not even offer an advantage in terms of cost.

According to UBI, high end LCDs use FALD (full array local dimming) BLU, which uses 100 to 500 dimming zones.  However, the number of local dimming zones are being increased to 1,000 to 2,500 using Mini-LED, to increase the contrast ratio and reduce the halo. UBI says to close the gap with OLEDs , 10,000 dimming zones and an active matrix are required to drive the backlight, putting the manufacturing cost of the panel (including modules) similar to OLEDs. But Mini-LEDs will introduce a number of weaknesses including:


Mini LED lowers the slower LCD response time central for moving pictures, and critical for gaming. The local dimming algorithms also reduce the accuracy of the color presentation. In the following figure, an image appearing on a standard reference monitor is compared with an OLED and a Mini LED. The OLED display reproduces the image accurately depicting the colors , while the Mini-LED reduces cause the image to be significantly lighter. The difference is caused by the local dimming algorithms.  Consider a 65” TV has an area of 1805 sq.in. and the best Mini LEDs have 2500 dimming zones. The area of each dimming zone is 0.72 sq. in. such that with 4K resolution, each dimming zone controls 3300 pixels covering a range of colors, which are then averaged to reduce the leakage caused by the LC that can’t filter out all the light. As a result, the actual colors produced by the Mini LED are different than the colors created by the camera as the figure shows.

Gaming now represents at least 10% of OLED shipments and the difference between the response time OLED and LCDs is shown below.

While the static images don’t reveal the effect of the 50X response time difference, consider the following:
​            Local dimming also adds to the halo effect that obstructs some LCD images as shown below. 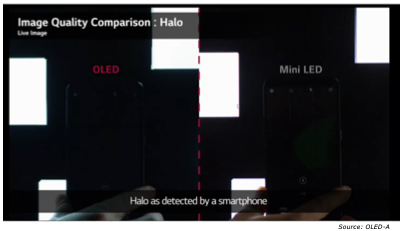 The chart unfortunately is incomplete because it does not reflect all of the Advanced TV shipments, which represent ~$1000 and up. DSCC provided a more complete categorization of Advanced TVs as shown in the next two charts.  Total Advanced TVs are expected to grow from 18m in 2021 to 30m by 2024. Clearly, OLEDs growth is slower than mini-LEDs, which don’t enter the market until 2021. But the Mini-LED growth is not at the expense of OLEDs, it is stealing from LCDs and QD LCDs. In addition, the forecast may not include the change in product mix, by which LGD is adding smaller panels 32”, 33”,40” and 48” that will increase the shipment count by 10% to 20% and still remain in the advanced display category.

The next chart shows the Y/Y growth rates for each technology: 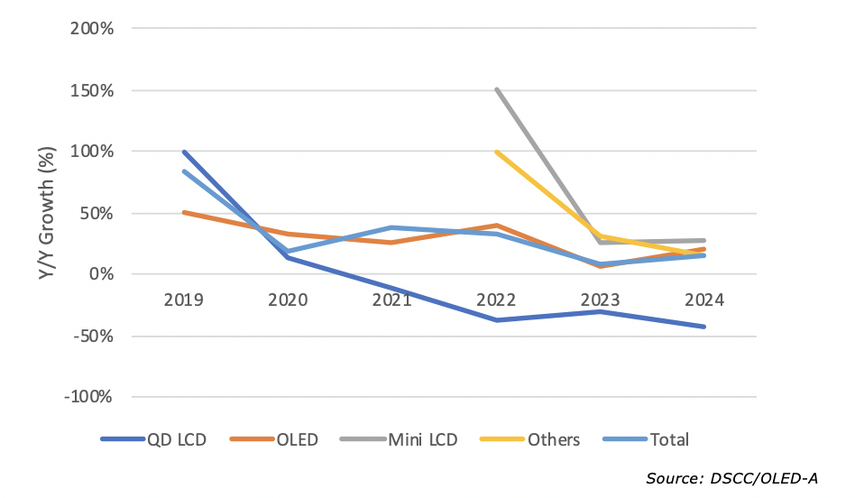 The introduction of Mini LED LCD TVs viewed as a plus for the LCD industry, not because it increases the share of LCD’ panel revenue but it raises the purchases price, which accrues to the panel maker if they provide the backlight, typically purchased by the set maker. The rise of Mini LEDs will not in the immediate future effect sales of OLED TVs, except for the improvements LGD makes to improve the OLED performance to maintain or increase the performance  difference. For example, DSCC recently reported that LG is raising the luminance by 20% initially and then will increase another 30% by developing non-device solutions.