According to IHS Markit, Japanese FPD equipment makers have more than a 50% revenue based market share, despite the growing competition. LG Display and Samsung Electronics began to pioneer high volume organic light emitting diode (OLED) manufacturing and doubled the effort to localize equipment and material production. Localization typically lowers the costs, offers fast responses to issues, and increases the ability for the suppliers to develop specific technologies. However, Korean panel makers often require restricted sales of jointly developed technology, which has limited suppliers from selling equipment and materials to competing panel makers.   Korean equipment companies have been highly successful in a wide variety of FPD equipment segments, particularly OLED production. Even so, Japanese equipment companies have continued to generate higher total revenues owing to strong positions in multiple process critical segments, such as photolithography, evaporation, and a variety of others.

Photolithography and evaporation alone account for approximately 20% of the total available market and more than 30% of modeled totals. Japan’s Canon and Nikon accounted for almost 98% of array and touch on thin film encapsulation (TFE) of the photolithography market between 2017 and 2019. Canon Tokki accounted for 55% of the evaporation market over the same period. Additionally, Japanese equipment companies that supplied Sharp’s Gen 10, starting in 2008, were well positioned to win business in the current Gen 10.5 expansion wave in China. 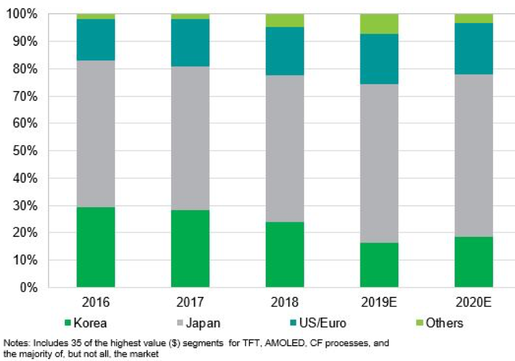 Korean equipment company revenue share was higher in 2016 and 2017 owing to the new flexible OLED factories at both Samsung and LG Display. For excimer laser annealing (ELA), which has significantly higher equipment intensity and higher average selling prices for OLED than LTPS LCD, Korea’s AP Systems accounted for 60% of the market, and all Korean makers accounted for 74% of the market between 2017 and 2019. In wet etch, Korea’s DMS, KCTech, and SEMES accounted for 73% of the market over the same period. On a unit and total available market basis, Korean equipment makers’ share is relatively higher than on modeled revenues. The FPD equipment market is mainly Asia based, but the US and European companies also contribute substantially. Principally, the US-based Applied Materials accounted for 84% of chemical vapor deposition (CVD) revenues. The high value-added CVD vacuum equipment is used in multiple applications for array, barrier, thin film encapsulation, and touch on TFE, and it is a large segment valued at more than $4.5 billion between 2017 and 2019. 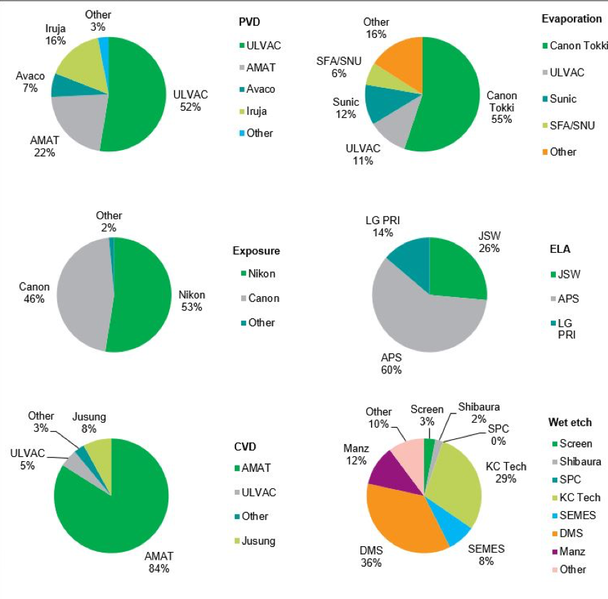 Driven by the technology shift from LCD to OLED and the building of FPD capacity in mainland China, FPD equipment reached an unprecedented three-year total of $54.3 billion. This benefited equipment makers in all regions. However, as the FPD industry now struggles to ramp and restructure flexible OLED factories, which are new technically and cost challenging, to absorb excessive LCD television capacity, the equipment market is currently forecast to decline 29% to a total of $38.6 billion over the next three years. In a declining market, competition to win limited business will only intensify. Japan’s strong position in FPD equipment will face mounting pressure, as Chinese Gen 10.5 investments slow and the market continues to shift toward OLED. The Chinese government is aggressively encouraging equipment localization with a variety of support mechanisms, and that is a growing concern for Japanese, Korean, and Western equipment makers alike.