​Preorders for the iPhone SE started on 17 April, before its release on 24 April.  From the start of preorders through to the second week, delivery days for the iPhone SE were consistently around 50% higher than for the iPhone 11 last year. Delivery days started to shorten from the third week. They are remain about 20% higher than was the case for the iPhone 11.  A lack of early production volume due to COVID-19, estimated at 1m units in Jan–Mar; as of January, vs. an expected 5m units. The production for Apr–Jun is forecast at13m units.  Delivery days have shortened since then due to higher production volume as operations normalize at Chinese production hubs. From: Mizuho Securities. Strategy Analytics also reported that the Galaxy A51 was the bestselling Android phone with a 5.5m units at a 2.3% share followed by the Xiaomi Redmi 8 with 4.5m units at1.9% share of Android phones.
​
Table 1: Q120 Android Phone Shipments and Share 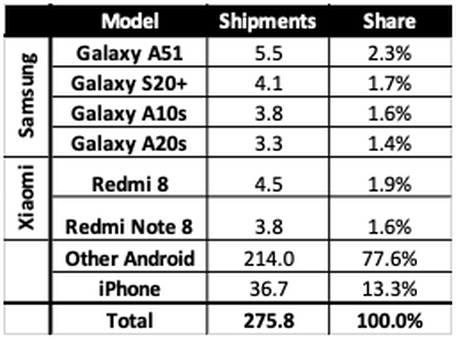