Startups Cynora and Kyulux have been developing TADF materials (Thermally Activated Delayed Fluorescence), which are hybrid fluorescent materials that have some of the characteristics of phosphorescent emitters and some of fluorescent emitters, and have been touted ultimate solution to producing a commercial high efficient blue emitter.
While Kyulux worked on red, green and blue, Cynora concentrated its efforts on blue and after years on developing a pure TADF material switched to a combination of TADF and Fluorescent material, similar to what Kyulux call Hyperfluorescence. . They have not yet produced the commercial TADF/FL blue, but their efforts have resulted in what they believe is a commercial blue material.  The emitter is based on an "advanced molecular design" that is 15% more efficient that current fluorescent blue emitters on the market. Cynora brands its new material as cyBlueBooster, and it says it is currently available for commercialization in several shades of blue. 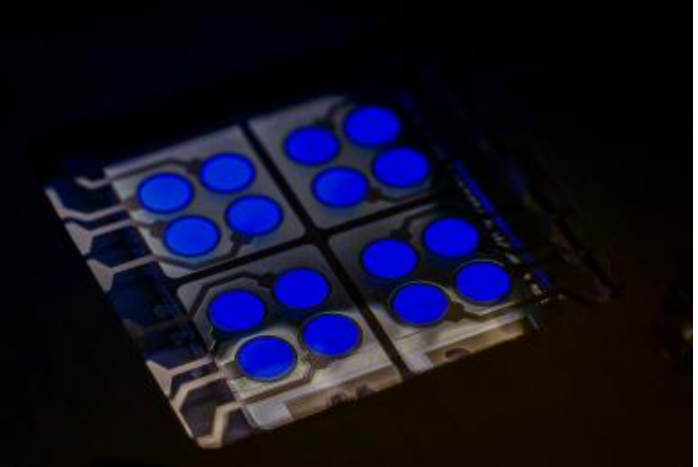 Cynora said the cyBlueBooster is just the first product on its roadmap - which will later include blue and green TADF emitters.  Cynora has development agreements and investments from both Samsung and LGD.  It generally takes at least one year to qualify a new material, so don’t expect to see the blue in 2020 products. Other than the 15% efficiency improvement, Cynora provided no information as to color point, lifetime, efficacy or cost/gram and whether the material was designed for top or bottom emission panels