CREAL, which is developing a light-field display, has revealed its first prototype AR and VR headsets. The milestone marks ongoing progress in shrinking the once-bulky tech into something which can be worn on the head.
Compared to the displays used in VR and AR headsets today, light-field displays generate an image that accurately represents how we see light from the real world. Specifically, light-field displays support both vergence and accommodation, the two focus mechanisms of the human visual system. Creal and others say the advantage of such displays is more realistic and more comfortable visuals for XR headsets. For more on light-fields, expand our explainer below.
Light-field Explainer
While Creal has previously demonstrated its impressive light-field display technology, we’ve only ever seen in it large benchtop demos. Now the company has revealed its latest progress in shrinking the tech to fit into a head-mounted form factor. While its AR and VR prototypes are still fairly large, by 2022, the company says it expects its tech to fit into yet smaller form factors. 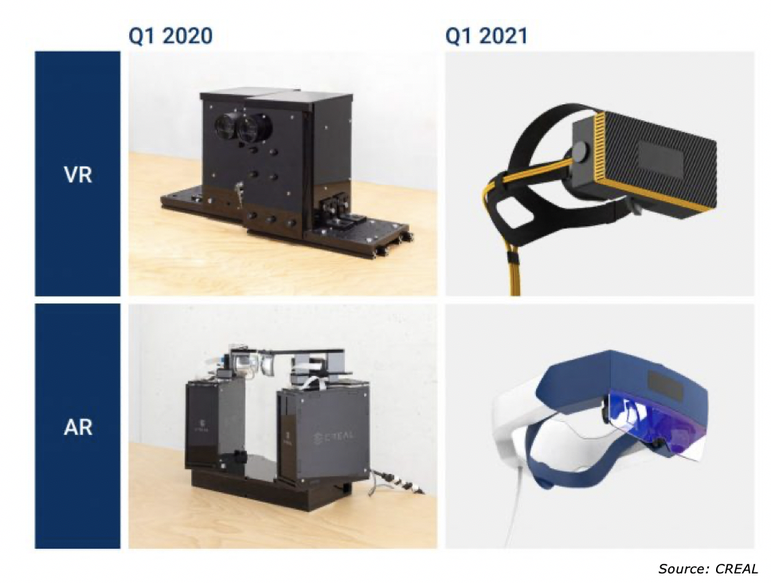 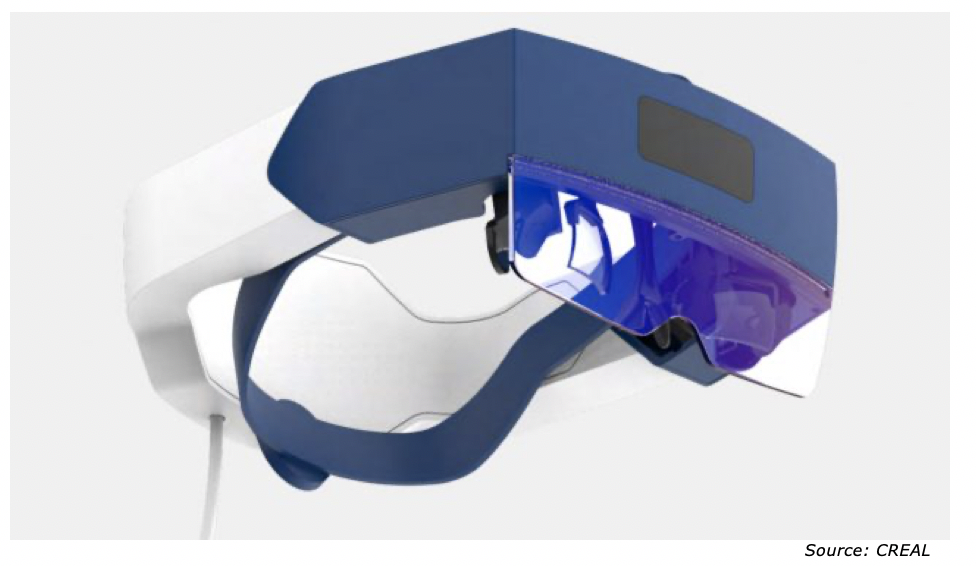 The Creal AR headset prototype has a resolution of 1,000 × 1,000 across a 60° field of view, according to the company, which also claims ‘unlimited’ depth-resolution (meaning continuous focal planes), with the caveat that it isn’t truly unlimited but that the steps between each focal depth are “much smaller than an eye can resolve.”
The Creal AR headset prototype is tethered and uses an Intel RealSense sensor for 6DOF tracking and Ultraleap for hand-tracking. Below you can see a through-the-lens demo showing the ability to focus at different depths.
While the Creal AR headset prototype is approaching the size of something like HoloLens, the company claims it will be able to fit its light-field tech into a sleek glasses form-factor by late 2022. Doing so will require moving to a foveated version of its display which would see the central 30° of the field of view occupied by the light-field, while the peripheral view would be filled with non-light field imagery out to 60° total, the company says. 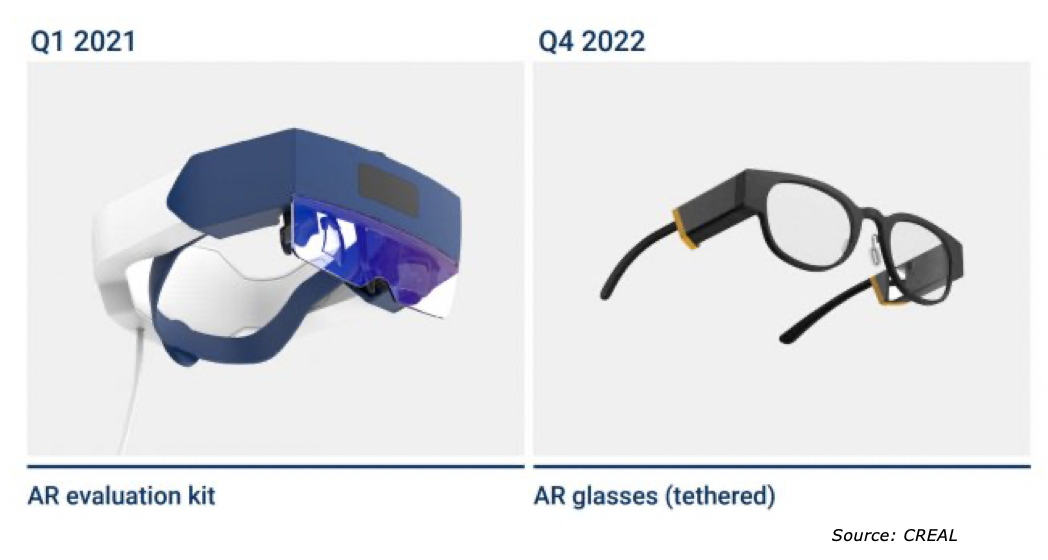 CREAL is also expecting to reduce power consumption from the current 2W down to 0.5W for the glasses-sized version, while boosting the eye-box to 8mm. 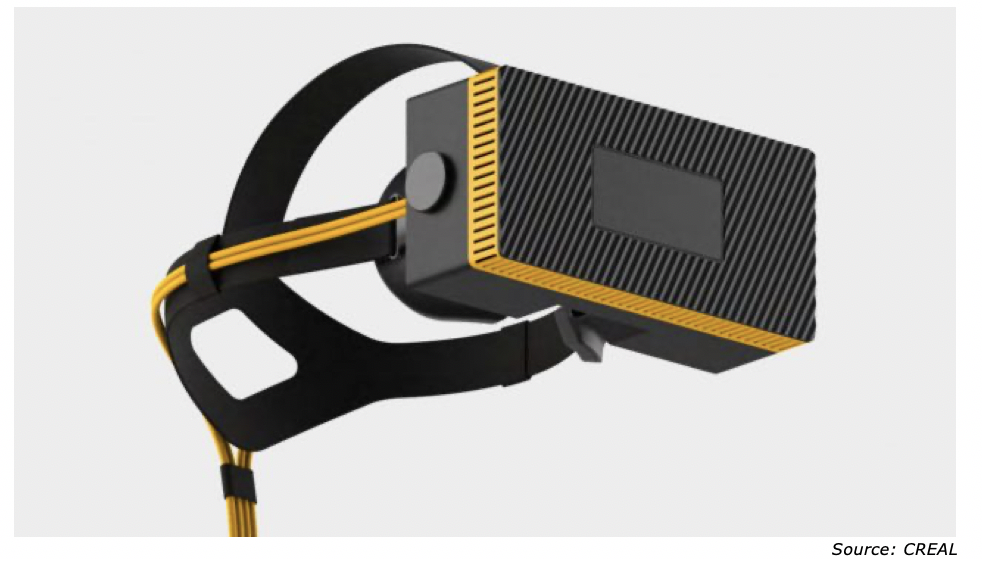 With its VR headset, Creal says it’s already employing the foveated light-field approach, with a 1,000 × 1,000 resolution light-field covering the central 30° of the field of view, and a 1,600 × 1,440 non-light-field view to fill out to 100° total. Because the light-field area is only 30° across, the resulting resolution is 40 PPD, which is approaching the retina resolution threshold (roughly 60 PPD). Below you can see a through-the-lens video showing the headset’s ability to focus at any depth in the scene.
The Creal VR headset prototype is using an Intel RealSense sensor for 6DOF tracking and includes eye-tracking from Pupil Labs, though the company notes that eye-tracking isn’t necessary for the light-field functionality. 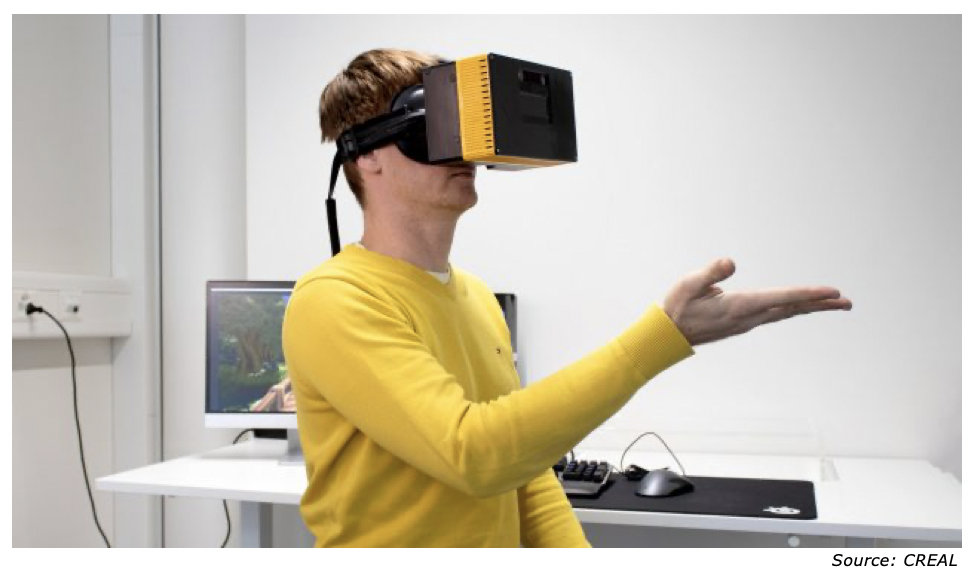 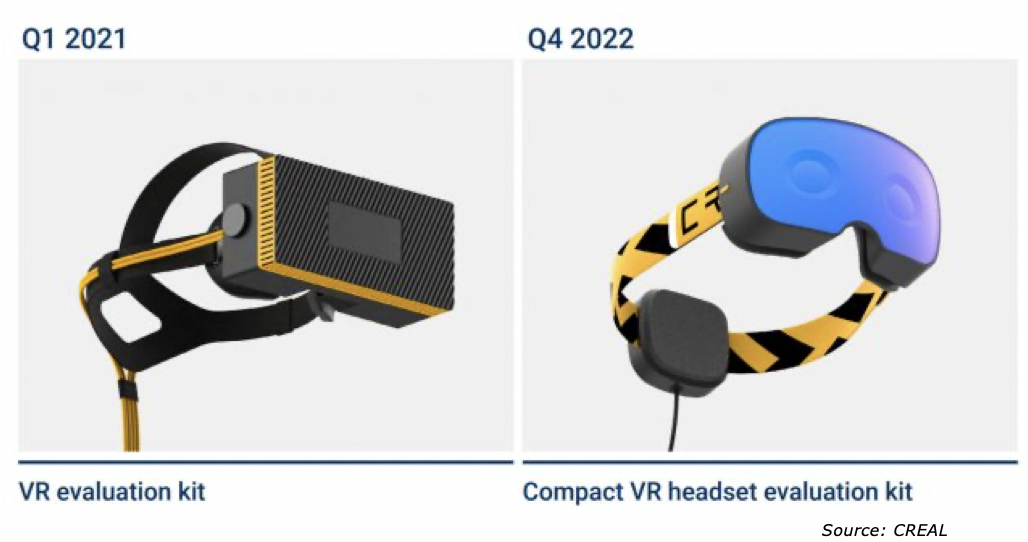 With the company planning to use a foveated combination of light-field and non-light-field displays going forward, we’ll be especially interested to see how closely the two views manage to blend together.
​
Creal’s announcement of head-mounted light-field prototypes follow the company’s latest investment round of $7.2 million announced late last year.