Vertical Divider
CPU Performance WiFi-6 and 5G Trending Up in PC market
May 04, 2020

Perhaps the most important trends happening in the PC market are improved competition for CPU’s and new standards in areas from memory to Wi-Fi 6. Early rollouts of AMD's Mobile Ryzen 4000 and Intel's new Comet Lake processorsfollowed the release of the first Intel 10nm Ice Lake systems late last year, which is  showing up in more systems, such as the new version of the Apple MacBook Air.

One of the most obvious trends in notebooks is mimicking the smartphone’s shrinking bezels around the screens and this is most obvious on high-end ultraportables and 2-in-1s. 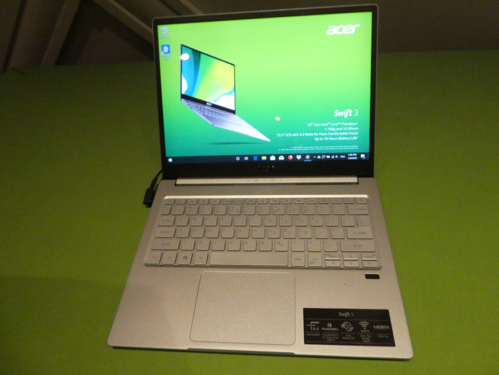 Source: PC Magazine
Making laptops work with smaller bezels is not just a matter of improvements in screen technology. Manufacturers have also found webcams that take up much less space, so they fit into the new smaller top bezels. HP replaced the 6mm IR camera in last year's model with a 2.2 mm IR camera.

Touchscreen laptops or even 2-in-1s aren't anything new, but thinner and lighter laptops, sometimes called ultraportables, are becoming a larger part of the market. 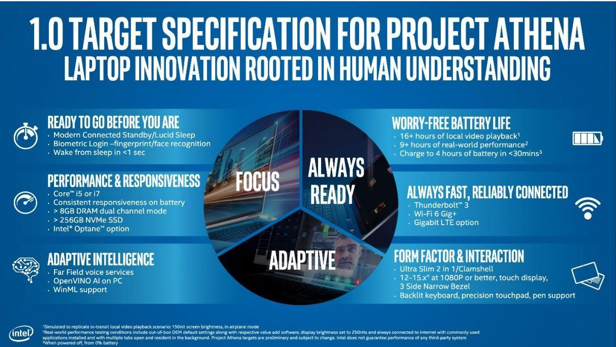 Source: PC Magazine
Notebook PCs are trying to emulate the advantages of phones, such as all-day battery life, always-on Internet connections, and instant on (actually the ability to wake from sleep instantly). Intel calls its version of this Project Athena and already all of the major vendors have products that fit this definition, including the Dell XPS 13, Lenovo ThinkPad X1 Carbon, and the HP Elite Dragonfly. Laptops have been getting lighter for years, and the trend is now towards even lighter machines. Ultraportables that weigh under three pounds are now commonplace, and there are more machines targeting 1 kg (2.2 pound), including the Elite Dragonfly.

Dynabook (formerly Toshiba’s laptop division, now owned by Sharp) has the Portege X30L, a 13-inch 6-core laptop weighing under 1.9 pounds, running Comet Lake.
Just a bit larger is Acer's 14-inch Swift 7, which weight just 1.96 pounds. (The company's Swift 5 series is less expensive and the 14-inch version is just a bit heavier at 2.18 pounds.) Lightweight machines now even extend to 17-inch notebooks, with the LG Gram 17 coming in at under 3 pounds, a big deal for a machine with that large of a screen. The push towards thin machines may be most notable when you look at gaming laptops. Not too long ago, these were behemoths of machines, with 13-inch models often starting at more than 5 pounds, and 15-inch versions at around 8 pounds.

15-inch gaming laptop with a great design are less than  five pounds, such as the Alienware m15 R2. Machine’s with AMD's latest Ryzen Mobile 4000 APU; the Asus ROG Zephyrus G14 (above), includes a 14-inch screen and Nvidia RTX graphics in a 3.5-pound package. High-end mobile gaming got a lot thinner with Nvidia's Max-Q platform, and Nvidia is raising the bar a bit this year with new versions of its GeForce RTX 2070 and 2080 "Super" GPUs for laptops.  Lenovo is pushing new gaming laptops, including its Legion 7 with Intel processors, Nvidia RTX graphics and a 15.6-inch screen, starting at 4.6 pounds.

With the availability of 5G for cellular and WiFi, the PC industry is starting to incorporate 5G into laptops. The first laptop specifically designed for 5G and headed for US markets is Lenovo's Yoga 5G, which it first announced with Qualcomm last summer as part of what they called "Project Limitless." The 14-inch laptop, which will have a 1080p display and weigh just under 3 pounds, will use Qualcomm's Snapdragon 8cx processor and the firm's X55 5G modem, and will support both the millimeter-wave and sub-6GHz versions of 5G. ARM based laptops haven't been able to match Intel or AMD in speed running Windows, and in the US connected laptops haven't been as popular as smartphones. Intel isn't standing still. Having abandoned its own 5G modem plan, it has announced a partnership with MediaTek to create a 5G modem designed for laptops with Intel processors. Both Dell and HP have announced plans to use that modem, but are not expected t until next year. 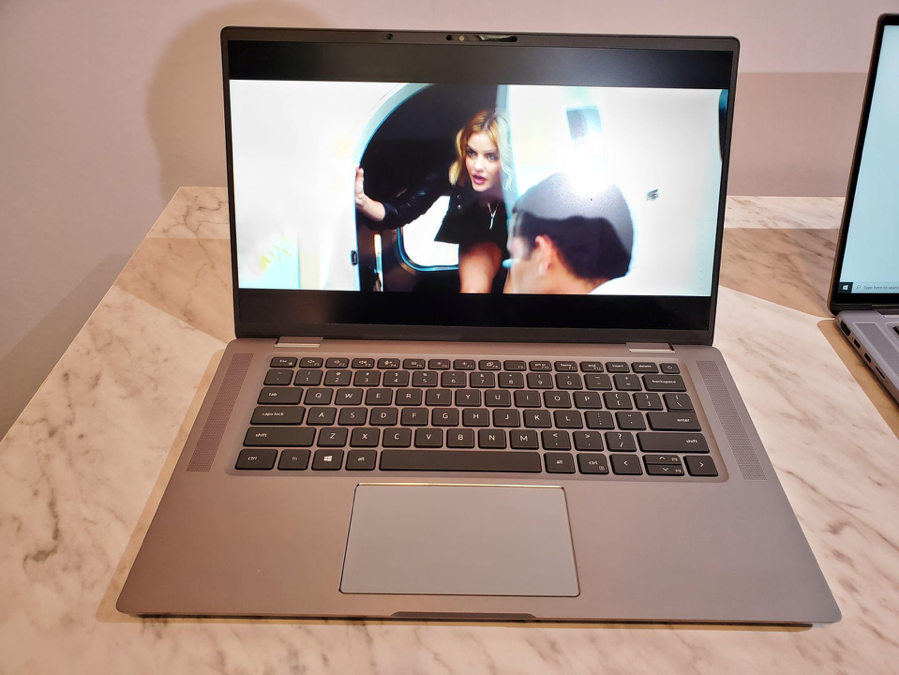 Source: PC Magazine
Dell's forthcoming Latitude 9510, its new flagship corporate laptop, is designed for 5G antennas and 5G support using the Qualcomm X55 modem, combining trends in notebooks into a new corporate line. The Latitude 9510 is a 15-inch, 3.2-pound laptop that Dell claims has 30 hours of battery life (with a 2-in-1 version that is just slightly heavier). It runs the Intel Comet Lake processors and uses the new smaller bezel displays to get a 15-inch display into what recently would have been a 14-in size. This looks like a strong contender in the ultra-premium corporate line. Meanwhile the 14-inch Latitude 7400 2-in-1, is being renamed the 9410.

HP has announced that the next version of its Elite Dragonfly, a very lightweight notebook, weighing 2.2 pounds with a 13.3-inch display that offers a 5G option.
HP is also pushing "green" with the notebook, saying that it is now using 90 percent recycled magnesium in its chassis, with over 82 percent of the mechanical parts made from recycled material, including ocean-bound plastic material in the speaker boxes. Perhaps the most radical change to laptops that could happen is the addition of a second screen, or switching to a screen that could bend in half so the laptop could be folded flat. While this concept is not likely to have a big impact on the market this year, many vendors are experimenting with foldable or dual-screen laptops, thinking this will be a new form factor. 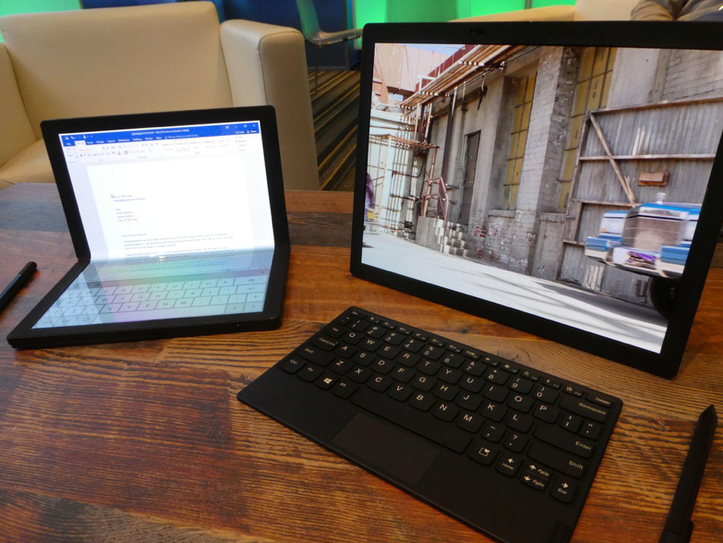 ​Source: PC Magazine
Lenovo's ThinkPad X1 Fold is expected to be released later this year. It uses a bendable 13.3-inch OLED display with 2,048-by-1,536 pixels in a 4:3 ratio, meaning that it would be the equivalent of two 8.4-inch displays. It uses Intel's forthcoming Lakefield processor and will have up to 11 hours of battery life. Unfolded it feels very thin (and relatively light at 2.2 pounds), folded it's a bit thicker—there's extra space around the bend because it doesn't fold completely flat.
Lenovo has an external keyboard, and that's probably good—if a bit inconvenient—because typing on a screen has never felt as good as typing on a real keyboard. But it supports typing on the screen, similar to a phone or tablet. 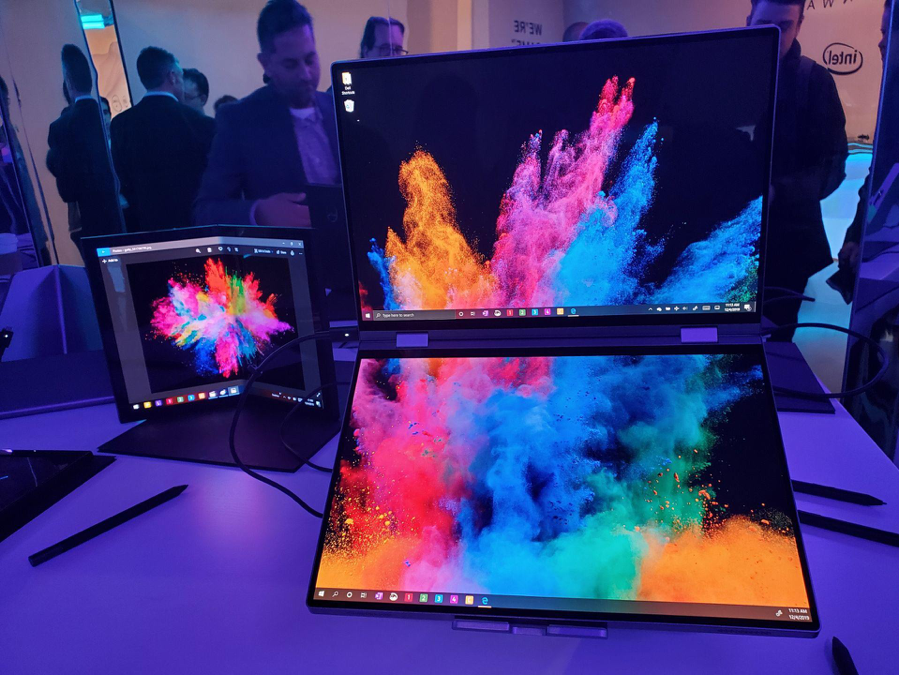 Source: PC Magazine
Last year Microsoft showed off the Surface Neo, which uses two 9-inch displays that combined have the size of a 13-inch display (but with a noticeable gap where the hinge comes together). It's an interesting idea—Microsoft says it will use the thinnest LCD display ever, with the whole device measuring 5.6mm thick and weighing 655 grams (1.4 pounds). Recently, both the machine and the operating system have been delayed until 2021. The other dual-display product Microsoft announced, the Surface Duo, is an Android phone, not a laptop and was also delayed.

Dell’s Duet supports using the second screen as a keyboard when needed, though an extra physical keyboard would be available to magnetically attach to the machine. 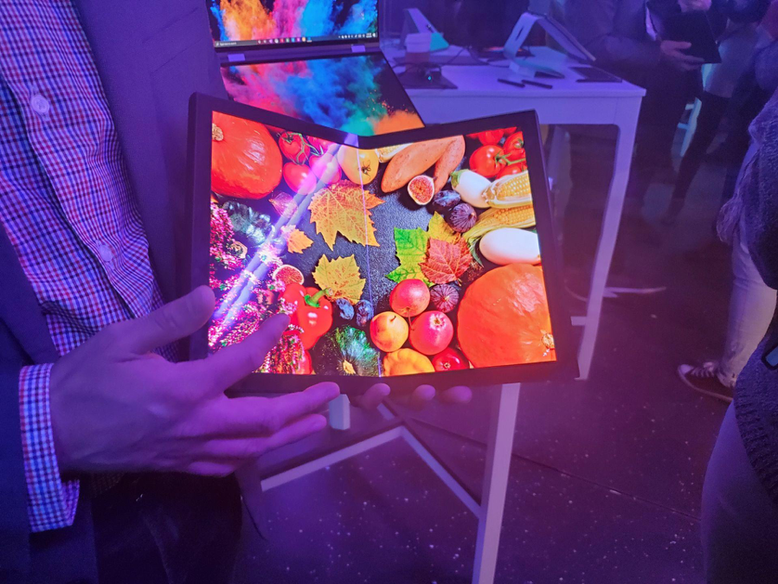 ​Source: PC Magazine
The Ori concept is in some ways more ambitious, as it uses a foldable display to come together like a book. In many ways, it looks similar to the Galaxy Fold. The screen folds in the middle, and there's less of a gap than the Fold, but it's further away from being a product. A virtual keyboard would pop up for typing, and applications include taking notes while watching a video. Dell talked about this as "an intelligent companion," something to take all the time, as it opens to a full size tablet, and then closes to the size of a book. 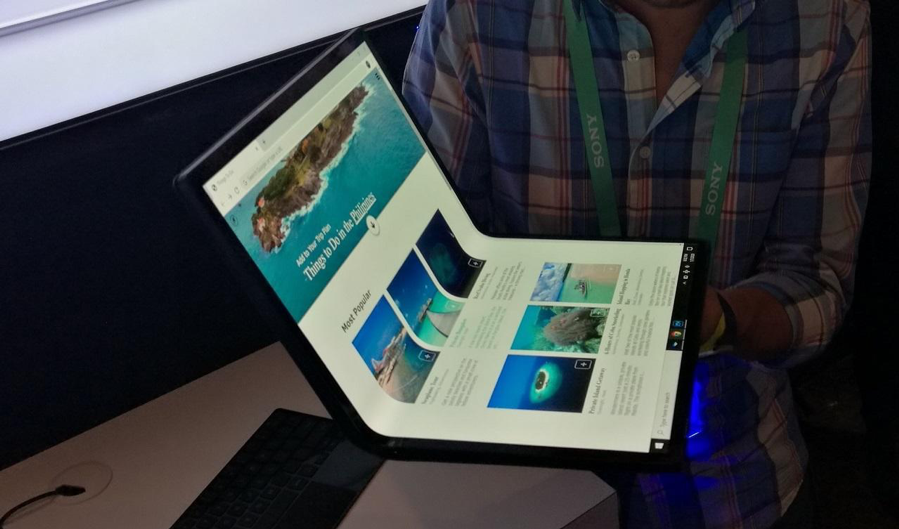 Source: PC Magazine
Intel showed its own bendable screen prototype, called Horseshoe Bend, which opens up to a 17.3-inch OLED display in a 4:3 ratio, but can be used either as a more conventional laptop (using the bottom part of the screen as a keyboard) or propped up like a book. Intel also showed a connected physical keyboard. It is a concept, so it's unclear whether machines like this will actually come to market.  ​From: PC Magazine