US: The US is the new epicenter of COVID-19, where automotive production has entirely stopped with automakers GM, Ford and FCA not announcing any specific dates for reopening their plants. Other automakers Honda, Toyota, and Hyundai plan to open their plants by mid-April, however, considering the situation in the US, these automakers too are expected to extend the shutdown.
China: Life continues to gain normalcy in China. Automotive plants have started to resume operations, and footfall is increasing in showrooms. Most dealers, however, are facing inventory runouts and car shortages. The Honda-Guangzhou JV plant in Wuhan is currently operating overtime to meet demand.
Europe: The situation remains critical in Europe. According to the European Automobile Manufacturers Association (ACEA), the EU-wide production loss now stands at over 1.5 million vehicles, with an average of 18 working days.

Source: Counterpoint
​
In 2019, automotive panel shipments decreased on a Y/Y basis and this year is expected to be down ~13.7%, which is a bit more optimistic than other estimates. Much of the decline is from China which has faced both COVID-19 and the trade war with the US.

There are 14 panel producers in China, although some are still in what might be called the development stage as to whether they will be producing LCD panels or OLED panels.  Simply stated, if the COVID-19 virus continues to spread worldwide through at least the 1sthalf of this year, the number of panel producers could be less in 2021.  While all panel producers in China and elsewhere are facing difficulties as the virus impacts both supply and demand, a number of Chinese panel producers that are in production remain on the edge of profitability. 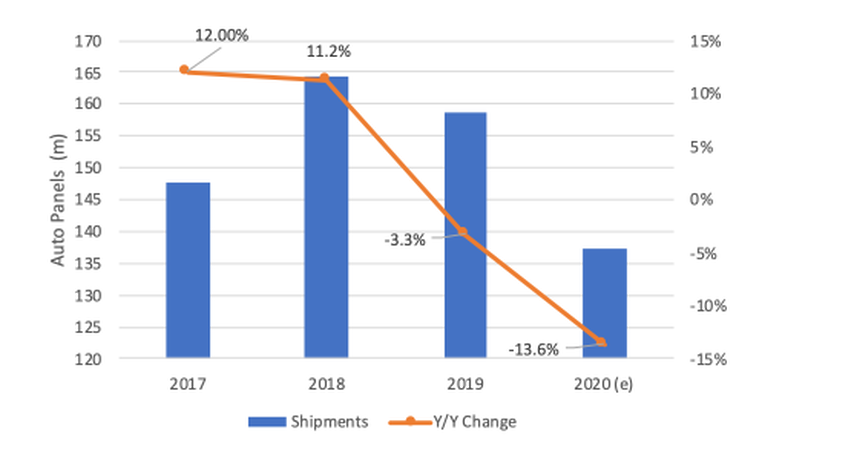 Source: Sigmaintell
With the coronavirus pandemic spreading fast, many display panel makers have seen tier-1 components suppliers in the automotive ecosystem defer or cancel orders, weakening visibility after April, according to industry sources. Although China's car production is recovering from the outbreak, automakers in Europe and America have suspended their assembly lines due to the epidemic, which has seriously undermined the orders for the panel sector, the sources said. Research conducted by Omedia also showed that global car-use display shipments may slip by up to more than 10% on year in 2020. The sources pointed out that demand for car-use displays was still on a rise during mid to late March, but starting April, orders from their downstream tier-1 clients have been slipping rapidly.
​
In the first half of 2019, Taiwan panel makers had a combined share of nearly 30% in the global car-use display market with AU Optronics (AUO) having an around 13% share, Innolux 11% and HannStar 3%, according to figures from research firm Sigmaintell. AUO has recently released a 12.3-inch dashboard display that is able to detect whether the driver is in fatigue by sensing his/her eye lid or head movements. AUO also has a 12.1-inch full-color automated micro LED car-use display that the company plans to push primarily into Europe, North America and Japan.

Innolux in March established a subsidiary to handle car-use panel supply to clients such as BMW, Porsche, General Motors (GM), Ford and Tesla, and in addition to panels, the subsidiary will also be conducting R&D, manufacturing and sales of car-use systems to form a one-stop service for clients, the sources noted.

HannStar has been cutting the proportion of handset shipments, aiming to raise the revenues from car-use applications. In addition to China-based car makers, it also has penetrated into the supply chains of several Europe- and Japan-based makers, the sources said. The company's plant in Nanjing, China has also recently passed clients' validations, the sources added. 30% of HannStar’s  revenues comes from car-use panels and is expected to increase from car-use applications in the next few years, the sources added. AUO is installing two new production lines for the manufacture of automotive panel modules in Taiwan, with volume production slated to kick off in the second quarter of 2020, according to company sources.
The added facilities are part of its NT$40.7 billion (US$1.354 billion) expansion project to ramp up its capacity, build smart manufacturing lines and develop high-margin large-size panels in Taiwan over the next three years, said the sources.
In addition to the two automotive panel module lines, AUO's capital spending for 2020 will also focus on upgrading the module production lines at its plant in Longtan, northern Taiwan, and accelerating the moving of its front-end production toward smart manufacturing. AUO is also adjusting its production deployments in the wake of coronavirus pandemic, according to company chairman Paul Peng. In the short term, production of LCD panels not designated for clients in China will be moved back to Taiwan, Peng said, adding that the company will also redistribute its supply chain globally over the long term coping with demand from clients.