Vertical Divider
COVID-19 Brings a New Normal in Geopolitics
May 17, 2020
​
China’s national power has taken a hit from COVID-19 on multiple levels. The outbreak has opened up significant political dissension within the Chinese Communist Party, even prompting thinly veiled criticism of President Xi Jinping’s highly centralized leadership style. A number of semiofficial commentaries have mysteriously found their way into the public domain during April. Xi’s draconian lockdown of half the country for months to suppress the virus has been widely hailed, but he has not emerged unscathed. Internal debate rages on the precise number of the dead and the infected, on the risks of second-wave effects as the country slowly reopens, and on the future direction of economic and foreign policy.

The economic damage has been massive. Despite China’s published return-to-work rates, no amount of domestic stimulus in the second half of 2020 will make up for the loss in economic activity in the first and second quarters. Draconian economic retrenchment among China’s principal trading partners will further impede economic recovery plans, given that pre-crisis, the traded sector of the economy represented 38% of GDP. Overall, 2020 growth is likely to be around zero—the worst performance since the Cultural Revolution five decades ago. China’s debt-to-GDP ratio already stands at around 310 percent, acting as a drag on other Chinese spending priorities, including education, technology, defense, and foreign aid. And all of this comes on the eve of the party’s centenary celebrations in 2021, by which point the leadership had committed to double China’s GDP over a decade.

The United States seems set to emerge as a more divided polity rather than a more united one, as would be normal be following a national crisis of this magnitude; this continued fracturing of the American political establishment adds a further constraint on U.S. global leadership. Conservative estimates see the U.S. economy shrinking by between 6 and 14% in 2020, the largest single contraction since the demobilization at the end of World War II. Washington’s fiscal interventions meant to arrest the slide already amount to ten percent of GDP, pushing the United States’ ratio of public debt to GDP toward 100 percent—near the wartime record of 106 percent. The U.S. dollar’s global reserve currency status enables the government to continue selling U.S. treasuries to fund the deficit. There’s also risk that the current economic crisis will metastasize into a broader financial crisis, although the Federal Reserve, other G-20 central banks, and the International Monetary Fund have so far managed to mitigate that risk as we discussed last week.

Chinese leaders view of the United States’ power rests on two fundamentals: the U.S. military and the U.S. dollar (including the depth and liquidity of the U.S. financial markets that underpin it). Everything else is detail.
China is now working to repair the enormous damage to its global standing that resulted from the geographical origin of the virus. China’s new generation of “wolf-warrior” diplomats are finding that China’s standing has taken a huge hit (the irony is that these wolf-warriors are adding to this damage, not ameliorating it). Anti-Chinese reaction over the spread of the virus, often racially charged, has been seen in countries as disparate as India, Indonesia, and Iran. Chinese soft power runs the risk of being shredded.

The United States is not much better. The world has seen what “America First” means in practice: don’t look to the United States for help in a genuine global crisis, because it can’t even look after itself. The crisis also appears to have shredded much of what was left of the U.S.-Chinese relationship. In Washington, any return to a pre-2017 world of “strategic engagement” with Beijing is no longer tenable. A second Trump term will mean greater decoupling and possibly attempted containment, although this strategy will be rendered incoherent at times by the president’s personal interventions. Biden would feature continuation of strategic competition (and decoupling in some areas) leaving some scope for cooperation in defined areas, such as climate, pandemics, and global financial stability. Beijing would likely prefer Trump’s reelection over the alternative, because it sees value in his tendency to fracture traditional alliances, to withdraw from multilateral leadership, and episodically to derail the United States’ China strategy. Either way, the U.S. relationship with Beijing will become more confrontational.

China’s response to the United States’ ever-hardening posture is now under intense review. This process began in 2018, during the first full year of the U.S.-Chinese trade war. It has now been intensified, because of the pandemic and its international consequences. The internal debate is about whether China’s national strategy of economic and military development, has in recent years become insufficiently reformist at home and excessively assertive abroad. Prior to Xi, the strategy was to wait until the correlation of economic and military forces shifted in China’s favor before seeking any major adjustments to the regional and international order—including on Taiwan, the South China Sea, and the U.S. presence in Asia. Under Xi, China has become significantly more assertive, taking calculated—successful—risks to bring about changes on the ground, as demonstrated by island reclamation in the South China Sea and the Belt and Road Initiative (BRI). The United States’ reaction to this approach has been deemed to be manageable, but that calculation could change in a post-trade war, post-pandemic world. Chinese policy behavior will likely be haphazard until China’s internal policy review process concludes, which may not happen until shortly before the 20th Communist Party Congress in 2022. Xi’s style is likely cause him to double down in the face of any internal dissent, which would harden China’s posture toward the United States, including attitudes toward Taiwan, the single most destabilizing element in the U.S.-Chinese relationship. Beijing is likely to sharpen its strategy of shrinking Taiwan’s international space, even as U.S. efforts to secure Taiwan’s readmission to the World Health Organization intensify.
​
Prior to the current crisis, the postwar liberal international order was beginning to fragment. The United States’ military and economic power, its geopolitical fulcrum, was being challenged by China, first regionally and now, globally. The result has been an increasingly dysfunctional and chaotic world. The current crisis is likely to reinforce such trends.

Strategic rivalry will now define the entire spectrum of the U.S.-Chinese relationship—military, economic, financial, technological, ideological—and increasingly shape Beijing’s and Washington’s relationships with third countries.
The new threats that both sides are making as COVID-19 related tensions grow could change all that. A decision in Washington to end U.S. pension-fund investments in China, restrict future Chinese holdings of U.S. Treasury bonds, or start a new currency war would quickly remove the financial glue that has held the two economies together. Should U.S.-Chinese confrontation grow, the multilateral system and the norms and institutions underpinning will continue faltering. With a damaged United States and a damaged China, there is no “system manager, ”to keep the international system in functioning order.[1]  It may not yet be Cold War 2.0, but it is starting to look like Cold War 1.5.

It could change with significant political and policy alterations in Washington; a reformist and internationalist readjustment in Beijing; the development of a new architecture of détente between the United States and China (drawing on the U.S.-Soviet experience), which places clear parameters around competition in order to avoid military disaster; and efforts by other countries to pool political and financial resources to preserve the essential multilateral institutions of the current system as a form of institutional triage until there is a return to geopolitical stability. But none of this will happen unless political leaders in multiple capitals decide on a new course. From: Foreign Affairs


Since the World Health Organization (WHO) declared the coronavirus a global pandemic on March 11, 2020, countries around the world have taken aggressive measures to slow the spread of the disease. Over the past two months, some places like Switzerland and Germany have seen the average percent change in their weekly cases drop, while countries like Portugal and Cameroon have had marked increases in cases. The data visualization team at Visual Capitalist adapted a graphic from Information is Beautiful, using data from Johns Hopkins University and created an infographic demonstrating where coronavirus cases are rising and falling.

Figure 1: Countries Where COVID-19 Cases Are Falling, Rising or Steady 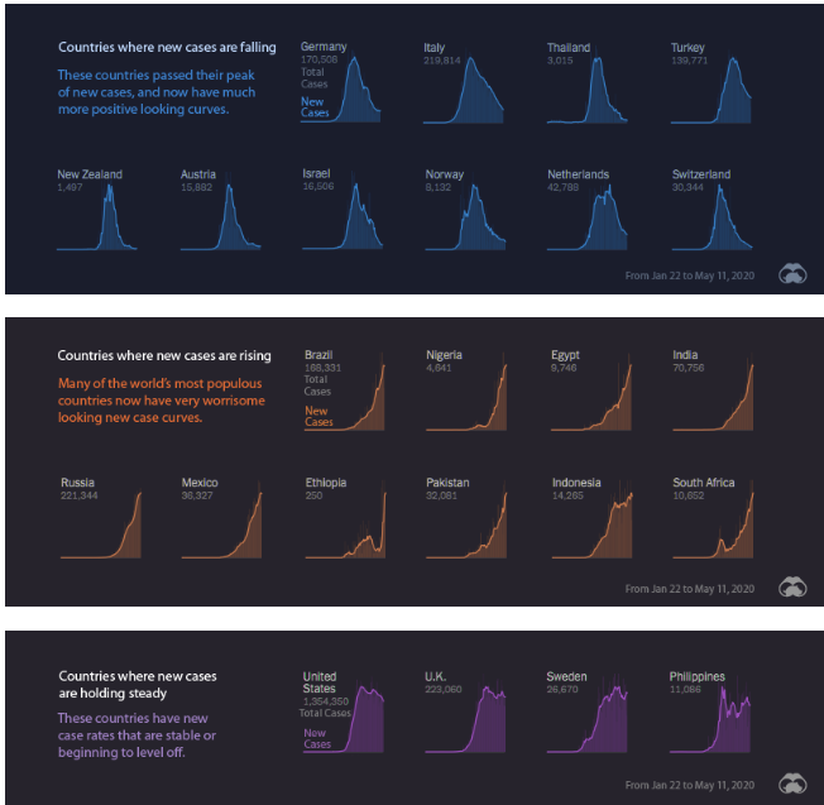