Vertical Divider
Cost of Galaxy S21 Drops by 7% vs. Galaxy 20

Producing a 128GB Galaxy S21 Ultra mmWave smartphone costs Samsung up to $533, around 7% less compared to the Galaxy S20 Ultra 5G, according to the latest bill of materials (BoM) analysis by Counterpoint’s component research practice.
The Galaxy S21 series has an optimized cost structure with the models’ cost falling between $400 and $600. Thanks to the integration of 5G modem in the main chipset, the new system has been simplified, helping bring the cost down. The adoption of the in-house Exynos 2100 platform provides room for more cost improvement. Samsung’s ecosystem contributed as high as 63% of the total BoM cost of the Galaxy S21 international edition.

Priced lower than the recent series, the new generation of the Galaxy flagship family quickly gained traction in Europe and North America. The overall sales volume in February (Galaxy S21’s first full month of sales) increased 22% over 2019’s Galaxy S20 series, reaching over 3.4 million units. Samsung made significant improvement in computing power with the 5nm process-based mobile platforms, either Snapdragon 888 or Exynos 2100 depending on the sales market, and also introduced a refreshed design for the rear camera bump. 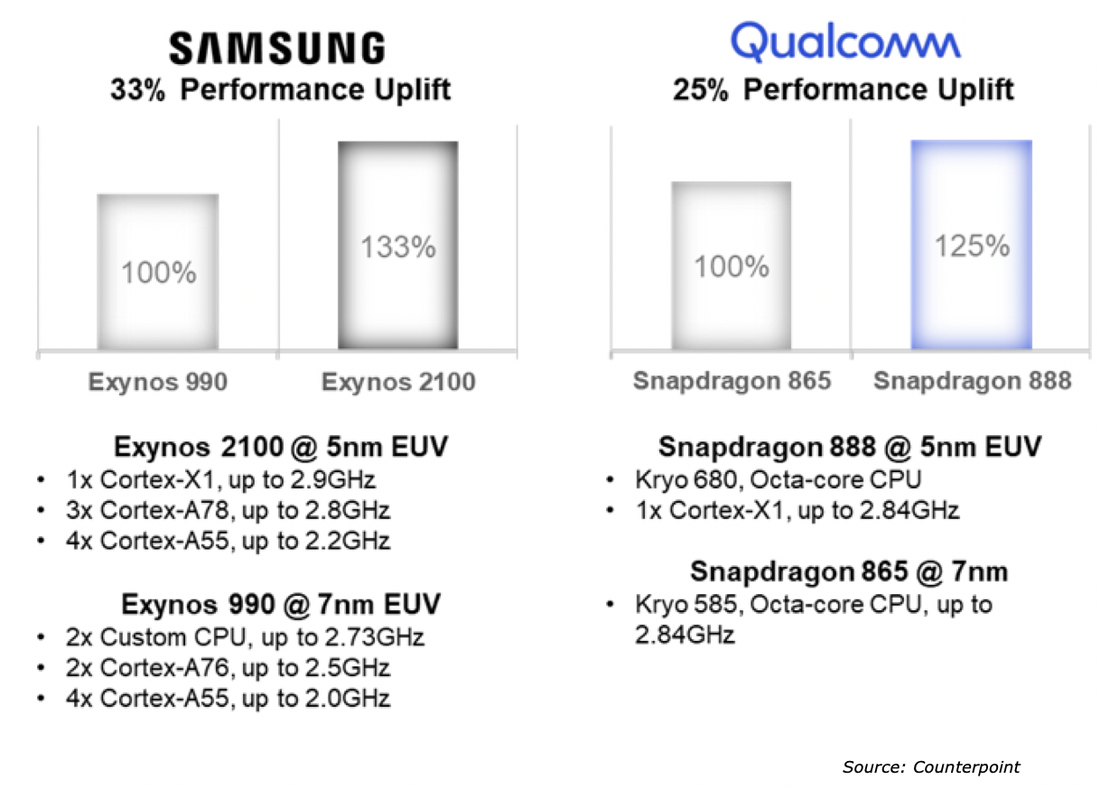 The design of Galaxy S21 and S21+ is more cost-oriented. The two models’ BoM cost is estimated to drop by 12%~13% from the Galaxy S20 and S20+ 5G at the expense of hardware specifications (both models have screens with lower density and no ToF camera, along with decreased RAM capacity in the Galaxy S21+). The new Ultra edition is a top-of-the-range flagship model, a combination of class-leading specs, from the 6.8-inch QHD+ Dynamic AMOLED 2X display to the 108MP led rear camera setup. Besides cost savings from the single-chip solution, the Galaxy S21 Ultra reduced the number of mmWave antenna modules from three to two and dropped the 25W charger and wired earpieces from the box. 5G baseband and RF components, memory and box contents represent the major areas of the cost decrease. However, the cost of connectivity increased slightly due to the support for UWB and S Pen.

​The early launch of the Samsung Galaxy S21 series was an effective countermeasure against the intensified competition in the global smartphone market’s premium segment as Samsung discontinued the development of Galaxy Note series, with its notable feature of S Pen being passed on to the Galaxy S21 Ultra. From 2021 onwards, Samsung’s flagship range (retail price of $800 and above) will focus on the Galaxy S family and Z series (premium foldables). The former is expected to play a critical role in strengthening Samsung’s share in the high-end segment amid increasing competition from both Apple and other Android phones.