Omdia published indicated Chromebook shipments in Q121 - up 369 Y/Y. HP was a big winner with 39% of Chromebook shipments. Omdia also noted that the Y/Y growth rate in 1Q21 would have been even higher but for component shortages and logistics issues. From 2021 to 2023 2023, Omdia expects a CAGR of 27.5%, with forecasts of 53.3 million units in 2023, when Chromebooks will account for 20% of total notebook PC shipments. The continued strong Chromebook demand will be driven by the "new normal" learning environment, including increased use of distance learning and government subsidy programs, such as the $122.7 billion in K-12 funding in the U.S. government's Elementary and Secondary School Emergency Relief Fund under the American Rescue Plan Act of 2021. Under the Act, local educational agencies can use the funds to purchase educational technology (including hardware, software, and connectivity) for students. Omdia believes that most of the demand for educational mobile PCs (notebooks PC and tablets) will be taken by Chromebooks because they are inexpensive to buy and support, making them well suited for agencies working with limited budgets. Omdia expects other OS vendors to adjust their licensing conditions to try to take advantage of this kind of scheme. Lenovo is getting closer to Acer in this market now, but HP has clearly been the big winner in Q1 after dropping in share in 2020. 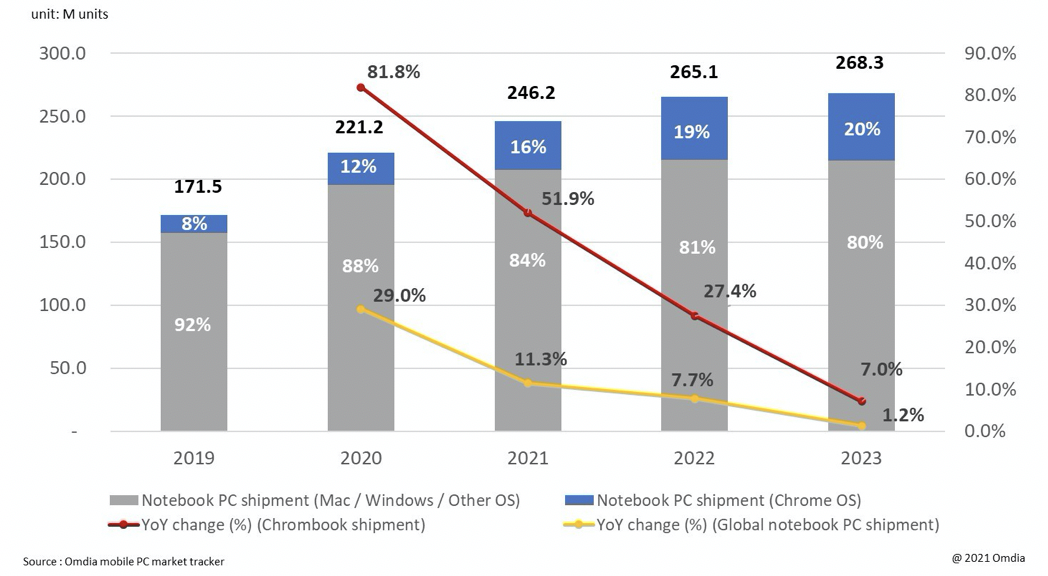