A sudden drop-off in sales caused auto manufacturers to cut component orders early in the pandemic. Then demand rebounded just as chip manufacturers were operating at capacity to produce components for hot, high-price items such as the latest generation of iPhones and artificial intelligence chips for data centers. TSMC said in its earnings call last month that the automotive market accounted for only 3% of its revenue in the fourth quarter compared with 51% for smartphones and 31% for high-performance computing chips. The firm said on the same call that improving production for auto chips is a “top priority.” But the harsh reality is that chips for cars have to compete for manufacturing space with other products that generate a much higher return. Nvidia, a major TSMC customer, sells some of its latest gaming processors for several hundred dollars apiece, whereas many of the microcontrollers used in the world’s automobiles can fetch a dollar or less. Even cheap chips can have expensive consequences, though. Stephen Sanghi, chief executive of auto chip supplier Microchip Technology, noted in his own call last week that “a $1 part can prevent a $40,000 car from shipping.” 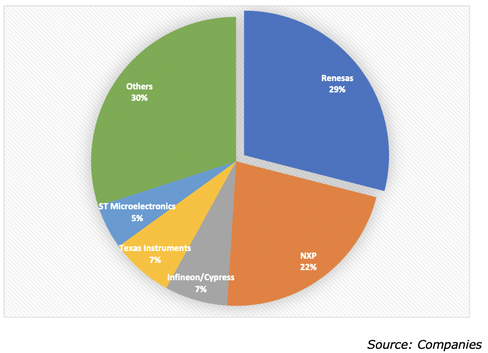 Chip fabrication plants generally take more than two years to set up and the soaring cost of building and equipping them has led more semiconductor companies to outsource more of their production needs. Renesas, NXP and Infineon -Cypress, which together account for nearly 80% of the automotive chip market, all use TSMC for some of their manufacturing. The Taiwanese firm now produces about 70% of the microcontroller units used in the world’s automobiles, estimates Phil Amsrud of IHS Markit.
​
Other parts of the auto chip market rely on older manufacturing processes and equipment to be economically viable due to their low prices. Mr. Amsrud notes that many car chips are still made on 200-millimeter wafers, which were phased out of the most advanced chip-making processes more than a decade ago. As such, the necessary tools are hard to come by, and the price of old gear on the secondary market “has gone through the roof,” according to Robert Maire of Semiconductor Advisors. The shortage will eventually resolve itself, but Mr. Amsrud predicts the situation won’t start to improve until the third quarter of this year or later. Over the longer term, the shortage might cause some chip companies to rethink their outsourcing practices. For now, though, car companies will need to make do with what they can get. Semiconductor manufacturing doesn’t have a lot of higher gears.  Taiwan Semiconductor Manufacturing, or TSMC, said in its earnings call last month that the automotive market accounted for only 3% of its revenue in the fourth quarter compared with 51% for smartphones and 31% for high-performance computing chips.