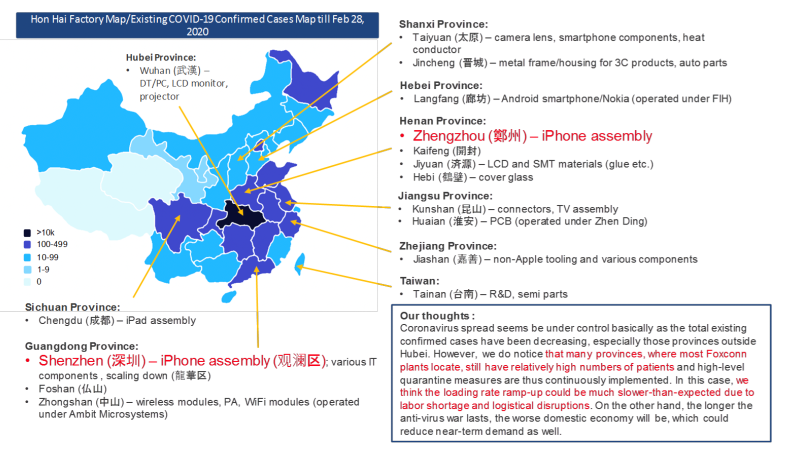 ​The first quarter is typically a lull for Apple and Foxconn, because most iPhone sales occur over the holiday season. But Foxconn’s supply chain turmoil coincided with the envisioned launch of Apple’s cheaper iPhone SE2, slated for launch as early as this month. Liu deflected questions about the SE2, saying only that Foxconn’s product research and development efforts were proceeding. Liu said they are considering reducing its annual revenue outlook. Hon Hai is projecting a sales increase of 1% to 3% this year, down from a Jan. 22 forecast for 3% to 5% before the epidemic spread around the globe.

Chinese companies have begun to return to work, heeding a call to safeguard economic growth -- though often not at full capacity. Hon Hai, which also makes products for HP Inc., Sony Corp. and others , saying it is restarting facilities throughout China in an orderly manner. Other key tech and Apple suppliers with major Chinese operations, such as Quanta Computer Inc., Inventec Corp. and LG Display Co., are also gradually bringing their factories back online.  Research firms vary in their estimates of how big the shipments drop-off will be but agree it will hurt. Strategy Analytics forecasted a 32% decline in Chinese shipments in the first quarter, to 60 million from roughly 89 million shipments a year earlier. Canalys, starting from a similar estimate for 2019, pruned its expectations down to 42.5 million shipments.