Vertical Divider
Chinese OEM’ Catch-Up Plan, Increase R&D Spending
​
Chinese smartphone brands are increasing research spending for high-end products, expanding product category and tapping into international markets amid fierce competition. In the second quarter, Chinese smartphone sales declined but sales are expected to rebound in the second half, with surging demand and booming sales for brands such as Honor, Vivo and its sub-brand iQOO and realme. Honor released its new flagship model Magic 3 with Snapdragon 888 mobile platform and AI-powered Honor Image Engine. Costing from 4,999 yuan (US$781), sales have already started. 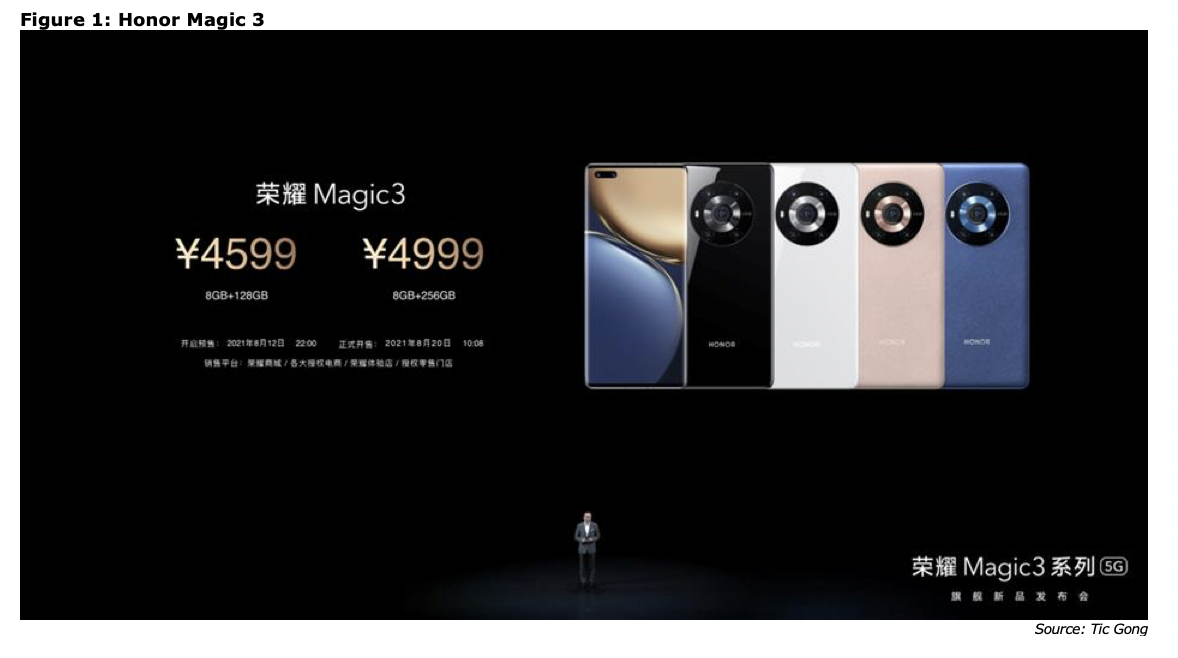 ​55 to 60 percent of the company’s employees are assigned to research and development with increased research spending. Honor intends to participate in in overseas markets to replace the Huawei brand. In Q221, the top five smartphone brands in the Chinese market were OPPO, vivo, Xiaomi, Apple and Honor, according to CITIC Securities. Vivo launched its flagship iQOO 8, which features an independent graphic chip, built-in gimbal for video and photography optimization, a high refresh rate and rapid battery charging. The "top eSports phones," started sales a week ago with a floor price of 3,799 yuan.

Realme expects to double its global user base to 200 million by 2023
It has sales in 61 countries and regions and ranks in the top five in 18 markets.
The company launched a laptop computer realme Book in China, the first time for the brand. It takes IoT strategy, referring to AI and Internet of Things devices, the company said. 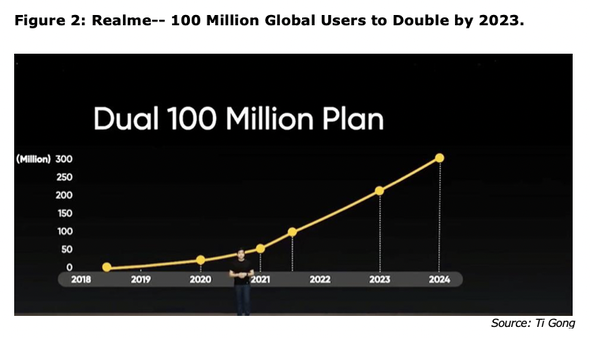 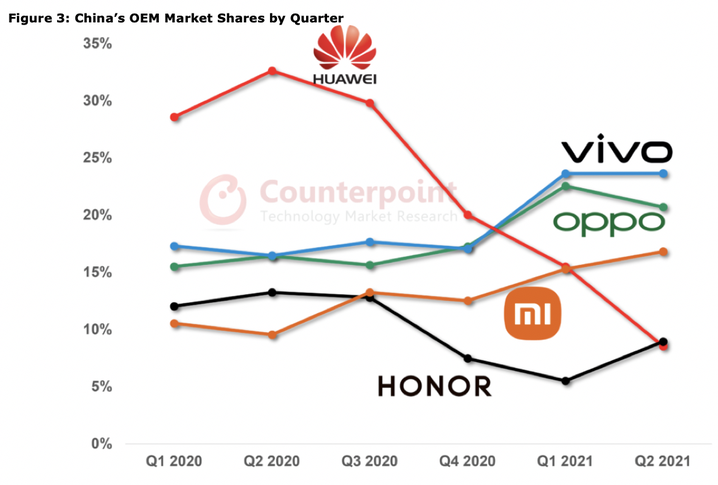 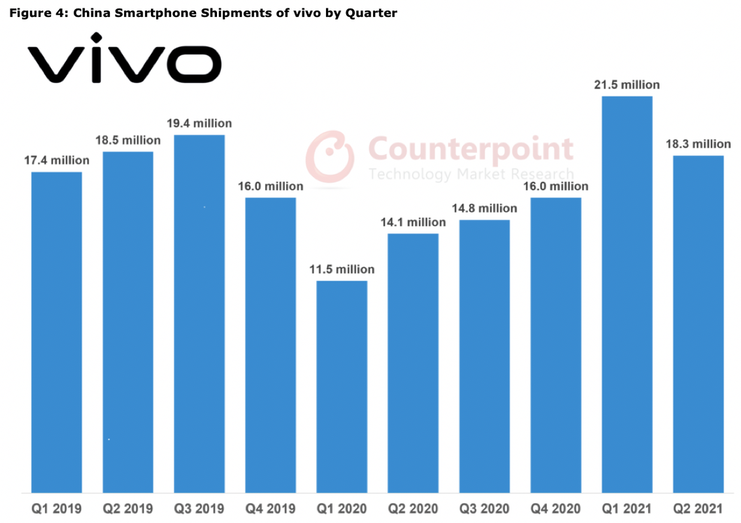 ​Though all top OEMs have benefited from Huawei’s retreat, it was vivo that managed to reach the top spot with its secured supplies of crucial components, optimized product portfolio, and a strong distribution network.

Main chipset suppliers for mobile phones — Qualcomm, MediaTek and UNISOC — are lengthening delivery lead times. As a result, they are focusing on key accounts and also increasing prices, the latest being UNISOC with its average 25% hike. But with the BBK group’s powerful supply chain, vivo can maintain a consistent supply of chipsets for its key volume segments — Y series and the newly launched S series. Within the Y series, there are 5G models available for as low as CNY 1,298 (~$200).

The newly launched S series focuses on the CNY 2,000-CNY 3,500 segment, while the X series focus is on the CNY 3,500 and above segment. The Y series, priced at CNY 1,999 and below, remains a volume-driven product group. This categorization of smartphones has helped vivo’s performance in 2021. While retaining around 50% share in the CNY 1,999 and below segment with its Y series, vivo has managed a breakthrough with the S series and increased visibility in the CNY 3,500 and above segment with the X60 series. Other major Chinese brands are trying to increase their ASP’s,  but their efforts are yet to produce big results.
Huawei’s woes have provided an opportunity for OPPO and vivo to grab more than 70% share in China’s offline channels. vivo has also reorganized its offline channel partners. The rising e-commerce sector has been impacting both brands and offline channels. However, due to different levels of development in Chinese cities, there is still a big offline market. vivo has invested considerable resources in the offline segment, including in trade marketing, promoters, ATL and BTL synergy, and margin schemes.

Although iQOO operates independently from vivo, since its launch in 2019, it is still listed on vivo’s website as a series. Unlike OPPO, realme and OnePlus, iQOO is focusing on the online segment for the Generation Z consumer group. Born after 1995. iQOO sponsored ‘Honor of Kings – KPL’, an e-sport competition, since 2019. As the hottest smartphone e-sport competition in China, it has been attracting millions of viewers every season. The vivo family (vivo and iQOO) has been its sponsor since the beginning of this game back in 2016.

Recently, HONOR unveiled its flagship Magic 3 series, aimed at the space vacated by the Huawei Mate and P series. However, its high prices have left many unimpressed. To Chinese consumers, smartphones above CNY 4,000 is reserved Apple’s iPhone, Samsung’s S and Note series, and Huawei’s Mate and P series. These brands have invested in promoting their flagship models as high-end phones with cutting-edge technology and innovation. vivo and Xiaomi are targeting this. Segment with NEX and Mix, respectively, both high on innovation.