Source: extremetech.com
Cameras, some of which had to be placed on the front of the phone were replaced with smaller and less intrusive techniques, with the ultimate goal of finding a way to eliminate all screen ‘intrusions’ and moving that SBR from an 80+% range to 100%. The Chinese OEMs were more interested in phones with no bezels, no buttons, and no notches, rather than a button prompted structured light system. Rather than adopt the more expensive and obtrusive feature, Chinese smartphone brands are betting on fingerprint recognition systems that normally takes up space on the display and devising ways to place it under or in the display, essentially removing it from sight and real estate consumption. Although,  some OEMs may use structured light systems going forward, and a number of video applications use some of that 3D data for image processing, TOF systems, which are less expensive and can be added to rear camera systems, are cheaper and provide a richer set of the 3D information that structured light provided. By placing the identification system in or under the display designers are opening up smartphone real estate to compete with structured light and TOF systems that still need a notch or cutout. While they have opened screen area, they still remain less accurate than 3D systems such as structured light and TOF, and only recently have such ‘under display’ systems become (potentially) available for LCD based phones.  Samsung has released a new under-display fingerprint system that relies on an ultrasonic system that can create a 3D image of a fingerprint, while still residing under the display.

Source: SCMR LLC, KAIST, Company Data
​
This system, which was introduced with the Galaxy S10 family generates more levels of data than either optical or capacitive systems, and while it is still oriented toward fingerprints rather than a facial representation, actually generates 3D data that makes it more difficult to fool.  What about the usual question that comes up about cutting off the finger of a dead person to activate some device (we do get this question regularly)?  In the case of the ultrasonic system, the next generation will also read blood flow and will finally end that gruesome question.  While ultrasonic sensors have distinct advantages, they are not perfect.  Qualcommdeveloped the sensor module with Samsung can penetrate glass up to 800μm thick and metal 400μm thick (aluminum to 650μm), and while OLED screens are thinner than LCD displays, the addition of screen films or protectors can reduce their effectiveness and thus far they can only be used on flexible OLED displays. 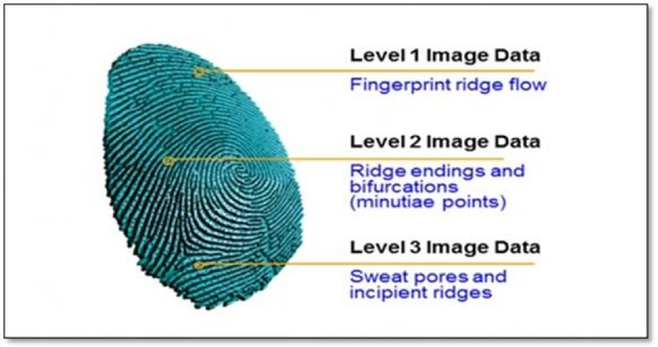 Source: GSMArena
​
There are new reports that Apple will not use structured light systems in an iPhone specifically designed for the Chinese market, which is a departure for Apple. Apple has been particularly consistent in bringing only a small number of iPhone models to the market each year, rarely deviating from that pattern (The iPhone SE might be considered one of the few outliers), but smartphone brands have found that the only way they can compete with local brands in a number of markets is to tailor models to the specific market or region.  Xiaomi and now Samsung have been quite successful in India by including features specifically for that market and are globally adding new features that would normally be reserved for yearly flagship releases to all smartphone, including mid and low-end phones.

While a new approach for Apple might lead to better results in China there are two other issues that will be reflected in such a change.  First, if Apple is designing a smartphone specifically for the Chinese market, it would have to be less costly than the iPhone XS/Max, more like the iPhone XR, but that would need a cost reduction plan, which could be accomplished, at least in part, by replacing the structured light ID system with an under the display system, perhaps ultrasonic.  Eventually moving to an in-cell touch system when readily available would be the logical plan going forward, but this brings to light the second issue, which is margin.

Apple has been able to maintain higher margins (aside from giving retailers less of a profitability slice) is by limiting the number of models it produces.  This allows for higher component volumes and lower component costs, something other brands fight against with every variant.  Apple will have to deal with this margin pressure if it takes this new approach to how it will increase its penetration into the Chinese market and evaluate whether the resultant lower iPhone margins are offset by an increased share of the Chinese market.  Estimates of “in-display” sensor penetration for this year, range between 6.3% and 13%, up from 3% last year.  The next table compares smartphones with under-fingerprint technology in actual applications for 2018 and 2019.

Table 1: Status of Under Display Smartphones 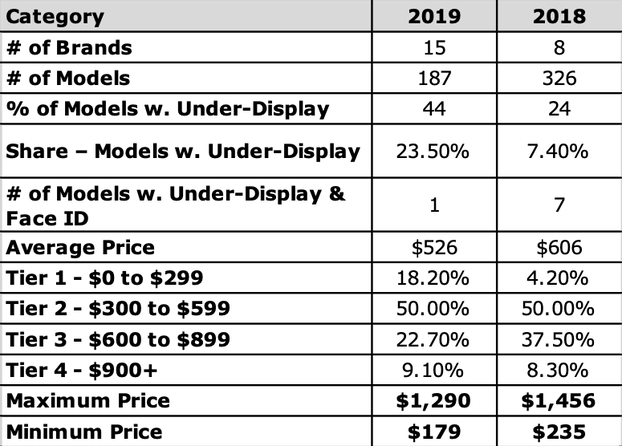 The number of smartphones that include both structured light and under-display fingerprint ID, which declined from 7 last year to 1 this year, indicating designer’s increasing trust in both solutions. Structured light systems will compete against under-display fingerprint solutions, however structure light and TOF systems can also provide important depth data that can be used by a variety of image processing applications, which will become increasingly important to software developers over the next few years.  While the current cost of structured light systems relative to under-display systems, likely limiting their use to tier 3 and 4 smartphones, the lower cost TOF could bring down the overall cost of non-fingerprint identification systems overall.  A combination of both structured light and TOF would not only provide facial identification information but allow image structure and depth data to be provided to applications.  These systems provide enhanced data that can be used for non-identification purposes, while under-display data would be limited to identification only.  The ‘identification’ category could bifurcate pushing under-display solutions to capture much of Tiers 1 – 3, and structured light, tiers 3 & 4, particularly as the cost of under-display solutions drops. In both worldwide markets and in China, 5 of the top 10 smartphone brands by share are Chinese, and while the number of local Chinese brand smartphone releases is declining, the share of Chinese brands in the Mainland market is increasing, with Apple losing share and Huawei gaining share. 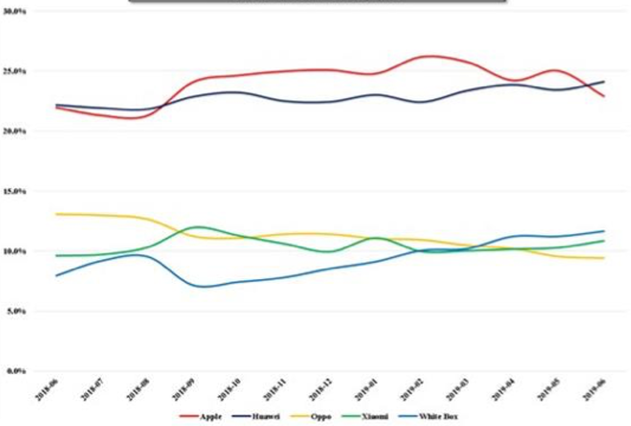 Source: SCMR, LLC
​
​Ming-Chi Kuo said that at least one of the new iPhones introduced in 2020 will have a smaller front-facing camera cutout, making for an improved screen to body ratio and a smaller notch, implying the use of Touch ID achieved by eliminating the TrueDepth sensor required by Face ID.

BOE indicated they will produce LCD displays with under-display fingerprint systems, which would lower the overall price of rigid display phones.