ChinaStar’s Innovation center has developed a new approach to patterning quantum dots.  The concept called electrophoretic deposition moves particles that have the opposite charged of an electrode.  Quantum dots can be charged by attaching positive or negative ions to the bonds that attach to the QD core and placing an oppositely charged material in the solution will attract the dots to that material, but only en masse. The researchers use photolithography to produce an electrode that is patterned, and will only attract QDs where the pattern exists, similar to the way photolithography is used to produce the circuitry that is the basis for the millions of transistors that appear on semiconductor devices.  Second and third electrode patterns can be created that would only attract QDs to those locations when turned on, so that by charging each electrode only when it is in the proper ‘color’ solution, a complete RGB QD pattern can be created on large substrates, with the thickness of the material controllable by varying the time and strength of the electrical field.  In some cases the QDs might be stacked, which would entail simpler patterning and the same three dip process, and the process is not limited to rigid substrates opening up the process to flexible and 3D structures.  The process (in the lab) took less than a minute for each color with about 20mins drying time for each.

The characteristics of quantum dots, particularly their inorganic nature (core) and their color purity make them viable candidates for self-emissive displays and such a more practical process could legitimize the continuing R&D into the development of a realistic Self-emissive QD product timeline.[1]  The issue for electroluminescent has always been the lifetime, which is still orders of magnitude below commercial standards. However, the technique might be less expensive for QD-OLEDs, which currently uses IJP to accomplish a similar task for photoluminescent QDs. 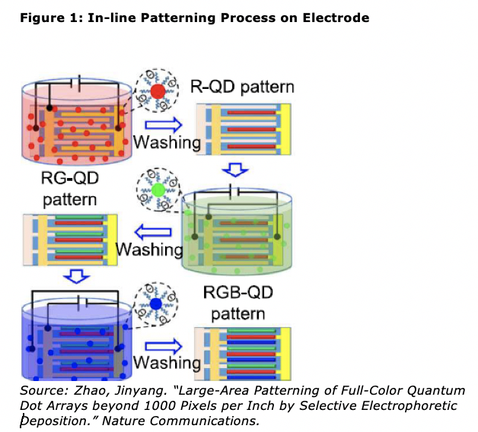 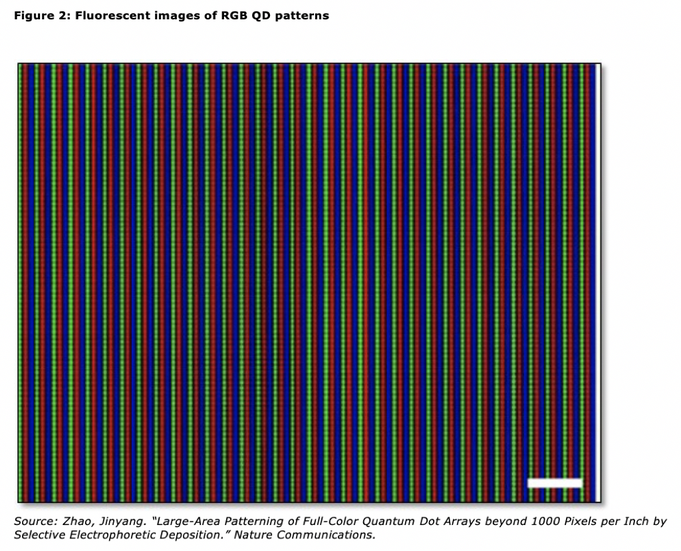