China saw unusually strong mobile phone shipments in January at 40.1m units, up 50.8% sequentially and up 92.7% Y/Y.  The 5 year average growth for January is -14.5%, so January 2021 represents by far the biggest Y/Y growth since the data became available and the first positive January since numbers were supplied.  China may be full recovery mode but Chinese smartphone consumers may have been buying in front of the New Year holiday, especially given that an increasing amount of device sales have been on-line rather than through brick and mortar sales, but less credence to the idea that such sales were stimulated by a large number of new smartphone models being released in China in January, as the data indicates that both overall new models and local brand new models declined 11.1% and 10.5% respectively on a m/m basis.

Another reason cited for the jump in Chinese smartphone sales was that many of the new models released were lower priced, allowing a greater base to purchase new phones.  The next table compares 53 new models that have been made available since January 1’21 to last year’s shipments by price in three price tiers. This snapshot represents 12.9% of the year. Based on those comparisons, pricing has come down thus far in 2021, with the lowest price tier (0 - €300) showing a big jump from 68.3% to 82.3% and the highest price tier (€600 - €1000+) seeing a decline from 11.7% to 6.9%.  The one tier that did not follow the trend was the mid-tier (€300 - €600) where the share declined from 20.0% last year to 10.3% this year, however if you combine the mid and lower tiers, the aggregate (prices from 0 to €600) the share of those lower-priced models increased this year, lending some credibility to the idea that lower priced models helped to stimulate January Chinese smartphone sales. 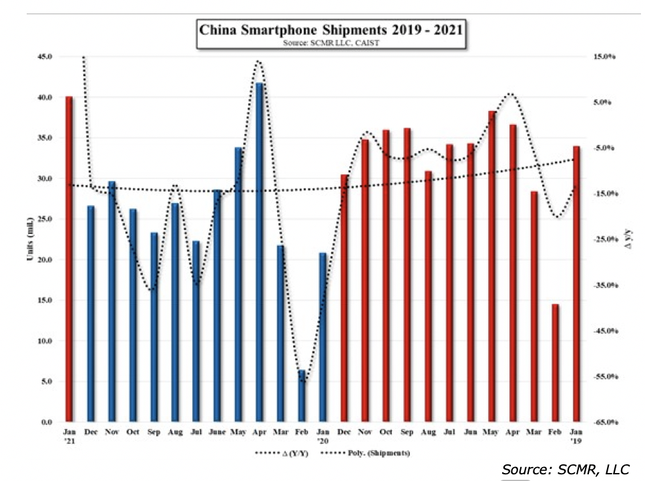