China’s Q221 smartphone shipments were down 24.6% sequentially and down 17.4% Y/Y, due in part to a sales spurt in April’20 that negatively affected the  Y/Y comparison.  Huawei had a 6.7% share down from 44.3% last year . Honor had 6.9m shipments, giving the old combination a 16.7% share. Vivo was the top supplier, followed by OPPO, Xiaomi and Apple.

​Honor has separated from Huawei to keep itself afloat, and move has allowed the brand to recapture some of its customers. The freefall from the early months of the year when Honor was reorganizing its business is seemingly over and the 50 series have brought in considerable spike in sales. Honor reached a market share of 9.2% for Q221 up 15% sequentially. 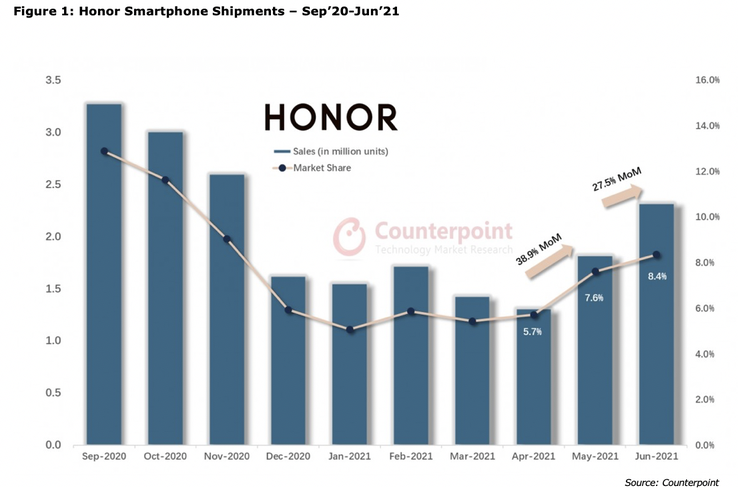 Counterpoint Research revealed sales between June 21 and July 4 have jumped 36%, compared with the previous two weeks, fueled by the Honor 50 launch on June 25. This means the company has more growth ahead of it and with the Magic 3 series coming next month it may not be stopping soon. The performance was attributed to brand loyalty among customers, as well as R&D capabilities - George Zhao has revealed over 4,000 people were rehired at the new HQ when Honor split from Huawei, and now users are appreciating the continuity the brand is keeping.
​
Another key reason Honor is poised to become a strong competitor are its links with Digital China - a Chinese company that has the biggest supply chain network under its wing, allowing Honor to distribute its devices to a wider audience.