While the March sequential shipment growth was less that the average 5 yr. average of 109.8%, the more telling metric is the March Y/Y shipment increase of 65.9%, far exceeding the 5 year average that is -8.5%.  The first months this year experienced strong Y/Y increases, although in 2020, COVID-19 ]had its greatest effect on smartphone shipments in China.  But absolute shipment numbers are higher by 17.9%, 50.3%, and 27.1% when compared to 2019 shipments, so the trend of negative smartphone growth in China seems to have ended for at least the 1st quarter of this year.

5G Smartphone shipments in China were 27.5m units in March, back to January levels and at the highest share of total phone shipments sine 5G shipments began in China, which was in mid-year 2019., and the share of 5G smartphones relative to all types shipped continues to increase.  While the 5G share of new models remains in a slow but steady uptrend. 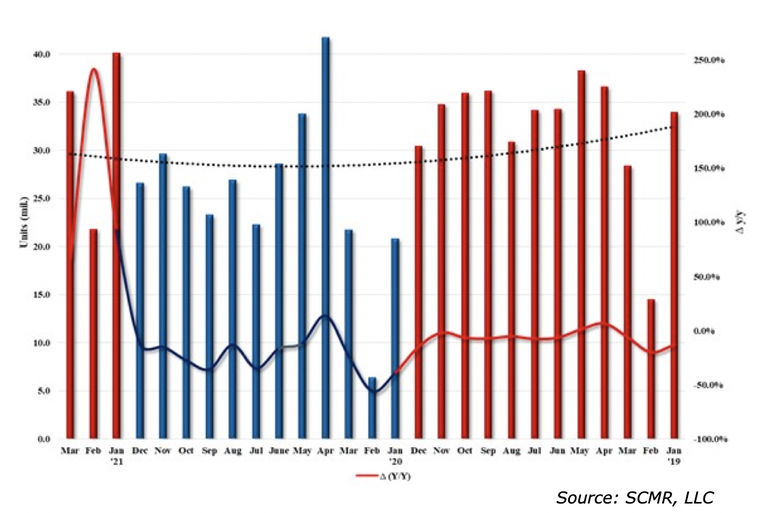 Another dynamic in China is that the loss of Huawei’s leadership position has increased competition for the #1 spot.  Vivo has overtaken its nearest rival Oppo to emerge as the top smartphone vendor in the China market in week 11 (March 8-14) of 2021, riding on the strong performance of its budget model Y3 and S9, according to according to Counterpoint’s China Smartphone Weekly Tracker. Vivo (including iQOO) jumped ahead of Oppo (excluding Realme and OnePlus) in week 13 to hold a market share of 24% while OPPO had a 21% share. Huawei (excluding Honor) stood in third position with a market share of 15% in week 13 as it continues to battle with U.S. sanctions and now chip shortage. 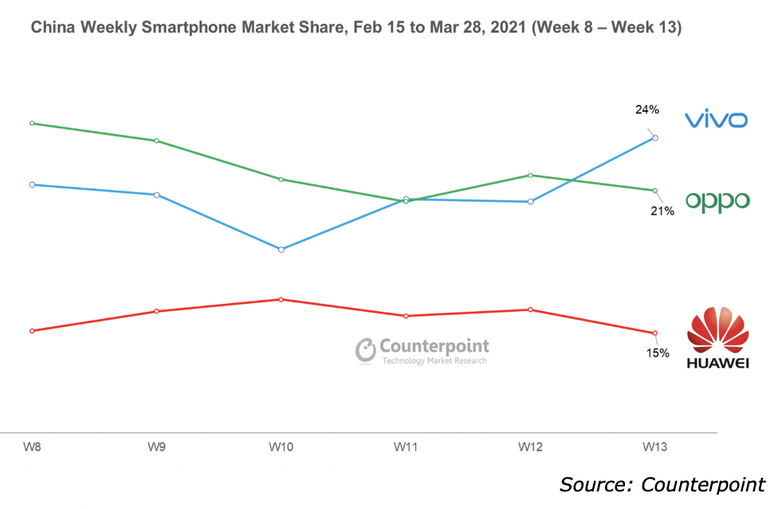