China’s President Xi Jinping has increased control over the Chinese Communist Party (CCP), which has greater control over all aspects of life. He is in a position to reshape the economy and determine whether companies will prosper or fail. He has brought reforms that liberalized the economy to a halt and has smothered market forces, returning to a top-heavy state-dominated growth model which looks distinctly creaky. Private companies have rushed to set up party committees with an increasing say over strategy. Their once-swashbuckling bosses have adopted lower profiles. Mr. Xi is not simply inflating the state at the expense of the private sector. Rather, he is presiding over what he hopes will be the creation of a more muscular form of state capitalism. 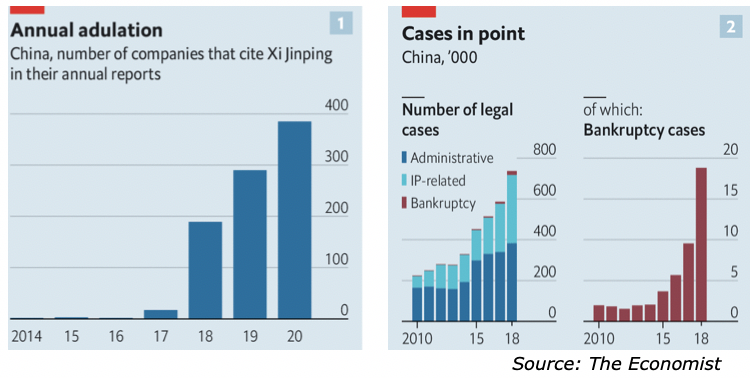 The idea is for state-owned companies to get more market discipline and private enterprises to get more party discipline, the better to achieve China’s great collective mission. It is a project full of internal contradictions. But progress is already evident in some areas. Mr. Xi announced his agenda in 2013, vowing that China would “let the market play the decisive role in allocating resources”, while reinforcing “the leading role of the state-owned sector”. When domestic stocks crashed in 2015 the government’s focus shifted to recapitalizing its banks, tightening controls on cross-border cash transfers and taming the wildest corners of its financial system. But the party now thinks it has won this “battle against financial risks” and is getting Mr. Xi’s agenda back on track in a new, bolder form.

American policy in terms of isolating some of China’s fastest growing companies, Huawei, ZTE, WeChat and TikTok has persuaded the party that China must be able to get ahead on its own. At the same time, China’s success in stalling its coronavirus epidemic and restarting its economy has reinforced its belief in what Mr. Xi calls China’s “institutional advantages”—the idea that, as a strong one-party state, China can pool its economic and social resources to meet critical objectives. Mr. Xi’s push can be broken down into two big segments. The first is to establish clearer boundaries for the fizz and ferment of the Chinese marketplace: a stronger legal system for businesses; simplified rules for day-to-day activities; a financial system better at allocating funds. The second is to make more adroit use of the government’s grip on the economy’s main levers: to make state firms more efficient; and to team them up with private firms in new industrial-policy initiatives.
Entrepreneurs still have considerable latitude, so long as they stay in their lane and move in government-endorsed directions. And they still have powerful incentives. “To get rich is glorious”, a quip attributed to Deng Xiaoping that became a mantra for China in its go-go years, still applies. But only so long as your pursuit of riches also benefits the state.

Into this quandary, the Trump administration puts a stranglehold on these companies. Eric Schmidt, former CEO of Google pointed out the recklessness 0f such a strategy. The US tech industry has thrived on creativity and openness that allowed the marketplace to establish winners and losers. Our technology has been able to cross geographic boundaries, because people wanted it. The unintended consequences of limiting the ability of companies to compete in the US, is eventually to limit US companies from competing outside the US. Moreover, as Huawei and ZTE  are constrained from buying chips made with US equipment; the Chine government  will use their resources to 1) invest in semiconductor fabs, 2)subsidize Chinese companies to copy and produce the very tools that propel our semiconductor industry and 3) constrain their OEMs to buying China when the chips are available. In terms of Internet companies, the policy is propelling China to take more control of the ubiquitous infrastructure.  If we were concerned that data on US citizens was being held in China, why not get these companies to use the efficient cloud services developed by Microsoft, Amazon and others. Trump is using dynamite when some sugar is more effective and as a result, he is toying with blowing up a part of our high tech hegemony.

Xi sees a range of economic problems facing his country, not the least of which is the handwriting on the wall left by Japan. In the 1980s, Japan was the envy of the world. Its economy grew rapidly to become the second largest in the world, led by a strong central government, a surging and increasingly productive manufacturing sector, easy access to money and credit, and protective trade policies that spawned huge surpluses with the U.S. Then the bubble burst, followed by three “lost” decades of economic stagnation. While history doesn’t repeat, it does often rhyme, and the Japanese experience may very well offer important lessons that are relevant for China, the current second-largest world economy.

Many foreign executives and diplomats have little time for the idea that there is real pro-market reform going on; they talk of promise fatigue. Repeated pledges to level the playing field on which Chinese and foreign firms meet have amounted to naught. State firms benefit from reams of subsidies and preferential rules, often opaque. Foreign companies have scant presence in key sectors such as finance and energy.


In a world where labor represents a smaller share of overall input costs, the center of the U.S. is perhaps becoming the world’s most attractive “emerging market.” It has cheap and easy shipping routes to attractive end-markets on the East and West Coasts, abundant oil and gas resources, ironclad intellectual property protections, one of the lowest tax rates in the world, an educated workforce and policymakers who are keen to bring investment back to the U.S. China very well may have made a critical strategic error in being too forward with its ambitions in unveiling these goals, underestimating the U.S.’s resolve to maintain its place as the preeminent economic power. But China’s strength is more than just cheap labor. As the Musing’s constituents are well aware, China has won the display battle (and LEDs, and Solar) not because of labor but because of capital. Now they are being pushed to accelerate their investments in semiconductors and the Internet.

China knows it can survive and thrive in a world led by the U.S. The U.S., on the other hand, does not know that its values and interests would be safe in a world led by China. As such, consensus appears to have formed in a bipartisan manner, both in the halls of Congress and among the public at large that the U.S. needs to defend and protect its intellectual property. Policymakers will likely continue to push back on advanced technologies while finding ways to incentivize companies to “come back home.”  Given this long-term strategic struggle, heightened tensions will continue to play out between the U.S. and China, in part because Chinese authorities might be forced to play a weaker hand. Over the course of 2020, relations are at risk of descending toward a more Cold War-like scenario, further enflamed by rising resentment at China’s lack of transparency in the initial stages of the Covid-19 pandemic. As long as the U.S. remains committed to protecting its economic interests, its advantages in terms of economic freedom, population growth, technological superiority and more efficient allocation of capital are likely insurmountable. But the steps to move away from an open economic environment will likely wreak havoc with our ability to compete with a more single minded and more driven entity not afraid to make major bets on technology. From: The Economist, Steve Chiavarone, Federated Hermes.


Xi Jinping hosted a symposium (link in Chinese) this Monday, bringing top officials and prominent economists and sociologists together in Beijing to discuss the upcoming 14th five-year plan. While the meeting was closed-door and individual comments have not been made public, the meeting has been prominently featured in state media. Xi gave a speech discussing six key takeaways:​particularly challenges including rural-urban inequality and social issues, and navigating an increasingly complex international environment