The market shares of the top five equipment semiconductor equipment suppliers, Applied Materials, Lam Research, KLA, Tokyo Electron and ASML (ASML),suppliers have 65% of the global equipment market of $59.5 billion. China currently has no noteworthy home-grown equipment companies that can match the technology offerings of these companies.

The next figure showing market share from 2013 to 2019, includes two lines for AMAT (black and gray). In general, except for growth in just one year (2016), market share has dropped for five or six years. In 2019 AMAT had $331 million from 2018 revenues and brought them into 2019. The company called it “REPROFILING REVENUE” - a change in accounting methods. Without reprofiling, 2019 revenues would be lower than 2018 (black line). However, with reprofiling, the $331 million deducted from 2018 and put into 2019 caused revenue to increase (gray line).
Figure 1: Top 5 Semiconductor Equipment Supplier’ Market Share 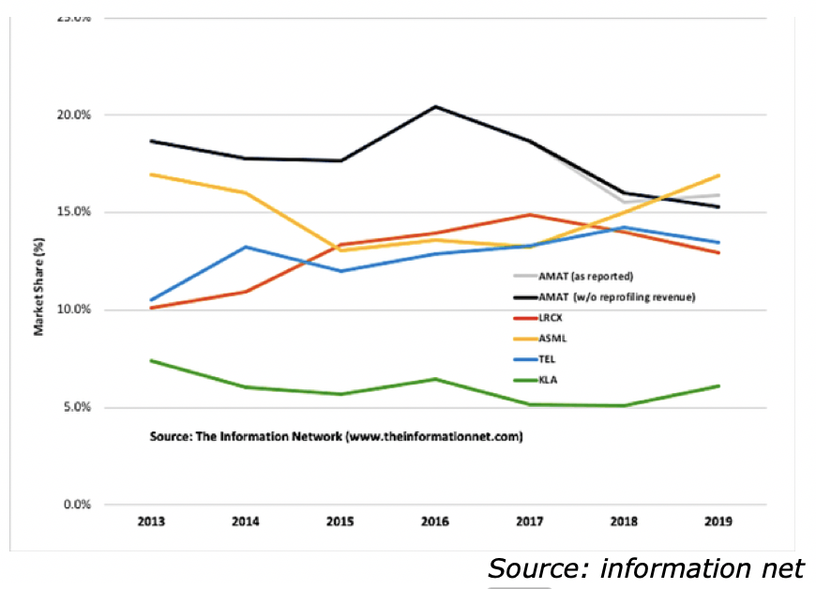 In 2019, there were $13.5 billion in imports of foreign equipment, but home-grown equipment sales were less than $250 million from leading companies AMEC and NAURA, and others including ACM Research, Mattson, and Shenyang Piotech, according to our marketing report.  The next table shows the various types of equipment manufactured by Chinese suppliers and comparing them to the top foreign supplier and that supplier's market share. 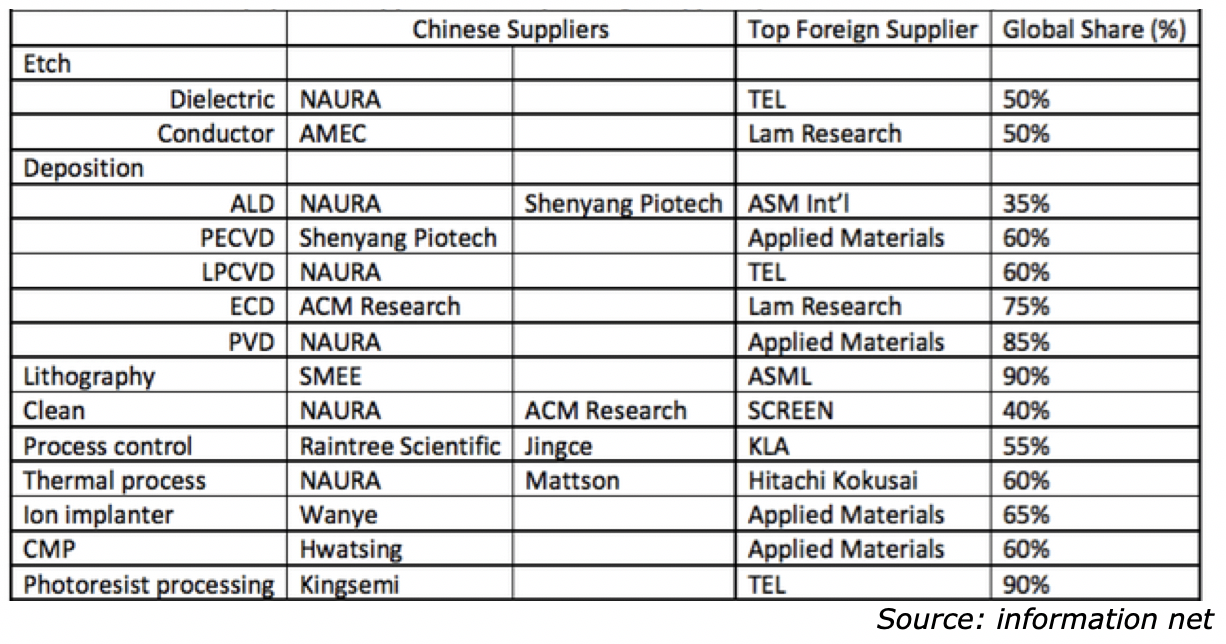 Note that (1) there are few Chinese companies for each type of equipment and (2) the top foreign equipment supplier has significant market shares, a deep moat for Chinese suppliers.

NAURA is capable of producing chips at 5nm, comparable to those of AMAT and peers. NAURA is making equipment with 14nm capabilities but is developing etchers and deposition equipment for 7nm and 5nm nodes. It’s important to recognize three things:

Many Chinese chip equipment and materials makers have also gone public, and received massive financial support from the local capital market. The future may be bright, even though the scale of these companies is still small compared with market leaders. SMIC, the leading Chinese chip supplier is incented by the government to work with them and test local suppliers, but we don’t expect these companies to replace any of the leading suppliers soon. The next figure sums up the huge lead foreign equipment have over native Chinese companies. In 2019, Chinese suppliers sold just $200 million worth of equipment compared to imported equipment from foreign suppliers valued at $13.3 billion. 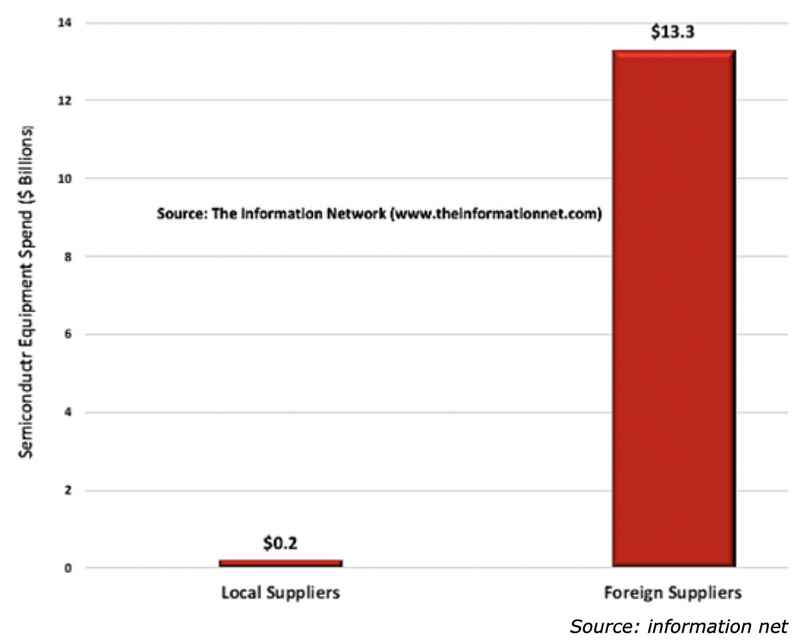 Although Chinese-made equipment has the ability to be used in the fabrication of state-of-the-art 5nm chips, there are numerous other factors that semiconductor manufacturers use to evaluate a supplier:


But the Chinese government is preparing broad support for so-called third-generation semiconductors for the five years through 2025.

​Semiconductor manufacturers typically take 9-12 months to evaluate a piece of equipment and make decisions on a "best-of-breed basis." However, the Chinese government is demanding that a portion of equipment used in a fab must be Chinese made. If Chinese made equipment is sitting side-by-side to a foreign-made system, how difficult would it be for Chinese equipment engineers to keep their eyes and ears open to discover features of the foreign equipment that could be implemented into their own.

If foreign engineers were not permitted by the Commerce Department to monitor equipment as  occurred in October of 2018, when the Commerce effectively shut down Chinese semiconductor firm Fujian Jinhu by cutting off U.S. suppliers, including suppliers of semiconductor-making machines because the firm allegedly stole U.S. memory chip maker Micron’s (NASDAQ:MU) technology, foreign equipment engineers picked up their tools and exited the building. Questions were raised as to what happened to that equipment and did the company reverse engineer the equipment already in the fab. Applied Materials would be most impacted by export restrictions of all foreign suppliers for several reasons:
Commerce restrictions could halt AMAT's acquisition of Hitachi Kokusai Electric as Chinese regulators still need to approve the acquisition and so far, they have refused.