China Smartphone Shipments Crater
March 15, 2020
​
While February is usually the slowest month of the year for the smartphone market as Chinese New Year travel cuts into both production and sales, this year had the added negative of the COVID-19 outbreak, which pushed smartphone shipments in China for February to the lowest number since the data has been recorded.  Total mobile phone shipments were 6,384m units, down 69.3% m/m and down 56.0% Y/Y, of which smartphones were 98.7%.  The percentage of 5G smartphones continued to rise in February but the actual number of units declined from 5.46m units in January to 2.38m units in February.  While not unexpected, the slowdown was unprecedented, likely caused by both capacity and demand issues and while local brands still captured 92.4% of mobile sales, it was a Pyrrhic victory. 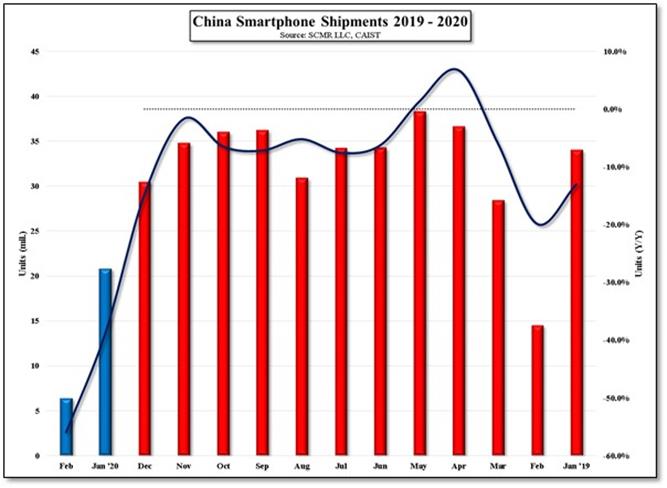 Source: SCMR, LLC
The last two years have been a lackluster for the iPhone. There’s been  incremental improvements to the camera, processor and battery, but there haven't been any major design changes or novel features since the iPhone X in 2017, which debuted the notched screen and FaceID. In turn, iPhone sales have also slowed down in the last couple of years as people are holding onto their devices longer.

Analysts now believe the iPhone 12 will have a solid response from consumers. Below, are the iPhone 12’s biggest features and the obstacles it may face.

Apple is apparently overhauling this year's iPhone with flat edges like the new iPads and different sizing options. The screen on the iPhone 12 Pro Max model will  increase from 5.4 inches to 5.8, while the smaller 5.8-inch option will shrink to 5.4. The middle-ground 6.1-inch model will remain the same, but with an upgraded display. All 2020 iPhone models are speculated to have OLED displays, as well as 5G.

Given these rumored upgrades, users who have been holding out on a new phone may be convinced to pull the trigger. This would create what Wedbush analyst Dan Ives calls "the perfect storm of demand."  His report, which was published in Barron's, said Apple is heading for a "supercycle" that will drive up sales.

If the iPhone 12 ends up being a bestseller, there is another snag Apple has to deal with: coronavirus. Ever since the iPads switched over to USB-C in 2018, there's been rumors that the iPhone will follow suit. Though it hasn't happened yet, there is  speculation that the next iPhone could eliminate ports altogether.  The latest iOS 13.4 beta mentions an "over the air" recovery mode on the iPhone, according to 9to5Mac. This would be a notable change since currently, the only way to recover data on an iPhone is through an iTunes backup stored on a computer. Users have to plug it their phone into a Mac or PC with a Lightning to USB cable, but an OTA method would eliminate this process. While the Samsung Galaxy S20 Ultra has an incredibly-large 108 megapixel sensor (plus a 100x zoom), 48 megapixel sensors is the norm in flagship phones over the last year or so, including in the other S20 devices. The iPhone 11 Pro camera specs are now looking a little paltry with 12 megapixel lenses and a 64 megapixel sensor would shoot it ahead of many of its rivals, especially if that sensor comes to both the iPhone 12 Pro and Pro Max.
​
Weinbach claims the iPhone 12 will maintain a triple-lens array but there will be an added Time of Flight sensor.  The new sensor would mean even better portrait mode performance (although it's pretty good already!) plus it would potentially help with ARKit apps, which have been a big area of focus for Apple. Night mode may also come to the telephoto and wide sensors as well as the main sensor in the iPhone 12, too plus there will be an enhanced HDR function plus an increased aperture size on the ultrawide lens.