China – Active Investments in OLEDs but Behind Korea
May 31, 2020

With China aggressively pushing advancements of key technologies, Korea has been forced to take up the gauntlet before it is too late. The Korea Herald’s Tech Team has looked into four key areas to measure the technological gap between Korea and China and offers forecasts about how the competition would develop. This is the second installment. And deals with displays, where they believe Korea is 2 years ahead. The technological race on the display panel front has to be looked at in two areas: the small and medium-sized panels for phones and the large panels for TVs and bigger devices. For the former, Samsung Display leads the global race with its organic light-emitting diode panels and for the latter, LG Display stands unchallenged as the world’s only OLED TV panel maker with the capacity to mass-produce. 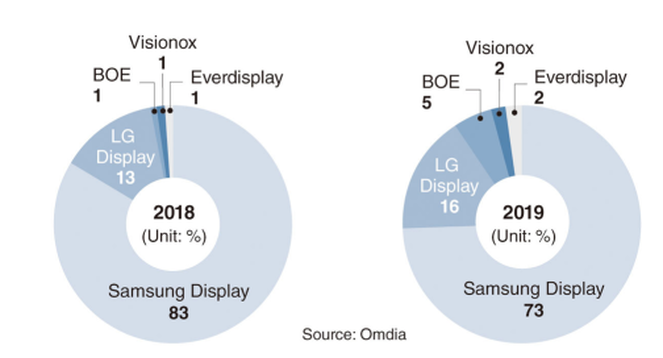 Omdia, showed that the top five global players in 2019 were Samsung (73 percent), LG (16 percent), BOE (5 percent), Visionox (2 percent) and EverDisplay (2 percent).
​
Samsung led the competition by a significant margin, although its market share fell 10 percentage points from the previous year. It lost market share to competitors including LG, which logged a 3 percentage point growth from the previous year, and BOE, with a 4 percentage point growth. The other Chinese firms, Visionox and EverDisplay, also grew by 1 percentage point, each. Chinese firms are catching up, backed with government subsidies for research and development. BOE is currently the sole supplier for Huawei’s flexible cellphone Mate X series, and it also supplies flexible screens for Motorola’s Razr phone.  But there’s demand the Chinese firms are just unable to fill. “The thing about BOE and the other Chinese manufacturers is that they skipped the rigid OLED and went straight to invest in flexible OLEDs,” said a Samsung Display official. “This is a tactic to selectively invest in more cutting-edge technology. Still, it also means that the Chinese suppliers are unable to provide for the demand for the conventional stiff screens that do not bend,” said the Samsung official. Samsung Display supplies OLED panels to Apple’s iPhone and all five major Chinese mobile set makers -- Huawei, OPPO, Vivo, Xiaomi, Google, Sony and Meizu.

“Chinese OLED suppliers’ products have lower quality but better price competitiveness. Many smartphone brands are co-developing with them, in order to avoid the risk of Samsung Display’s market domination,” Omdia. In April, BOE announced that it was developing a 3D sonic ultrasonic fingerprint sensor with Qualcomm, after which rumors broke that the Chinese display manufacturer could potentially be supplying panels for Apple’s upcoming iPhone 12. No confirmation has been made regarding the rumors.

Backed with unsparing financial support from the government, Chinese manufacturers are aggressively churning out LCD screens that have caused the Koreans to abandon the market. “There are so many ways an OLED panel can evolve, such as going rollable and transparent,” said an LG Display official, although LG has yet to produce the first commercial version of its rollable TV.  In order to catch up with Korean OLED suppliers, Chinese suppliers are trying to hone cutting-edge OLED technologies such as low-temperature polycrystalline oxide panels, rollable or foldable screens and under-panel-cameras. But the Korean’s are already moving beyond these technologies to IJP and QD-OLED hybrids. From: heraldcorp