Vertical Divider
China Moves Ahead of Korea in TV Shipments

China has taken the lead in regional TV shipments in Q220, taking over from South Korea  While South Korean panel producers Samsung Display and LG Display are exiting the LCD TV panel market, their TV OEMs, Samsung VD and LGE were prepared for the  changes as they source from a variety of panel producers, limiting the effect of the change is supply.  China has also stepped up its push toward improving its “TV” image, which in the past, has been oriented toward low-priced sets.  Chinese brands have been increasing their penetration into the premium TV space, particularly by introducing new technology such as TCL’s mini-LED TV, Xiaomi’s transparent OLED TV, and Huawei’s hub TV, BOE’s dual panel design, with most of the large Chinese brands offering OLED and QLED products.

China’s push toward the high-end market will not come easily however, as Chinese consumers are used to paying progressively less for progressively larger TVs.  In the first half of this year the average size of a ‘color’ TV in China increased but the average price declined to ~$358, with 55” TVs as low as $145, $65” at $247, and 75” at $436.  Since then, with the introduction of the advanced TV products, average TV prices have been rising, and will likely continue based on rapidly rising panel prices. Chinese smartphone brands were able to provide almost all of the features of high-end smartphones for much lower prices and grabbed much of the market. China’s TV makers are trying to replicate the strategy, as they introduce on-line TV buying.
​
Table 2: 2020 TV Shipment Share by Brand 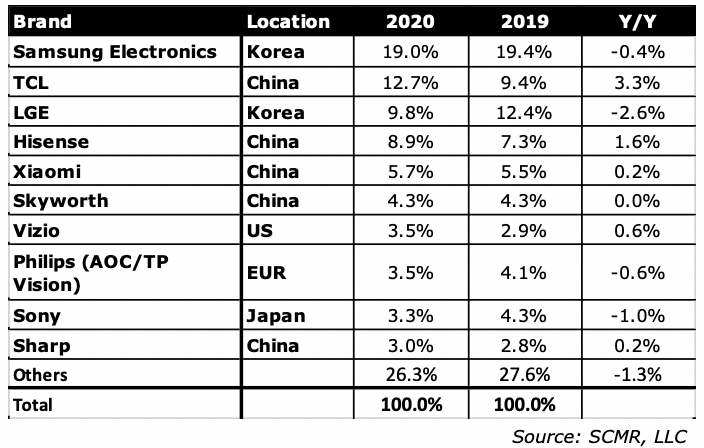 ​Samsung expects to ship more than 100,000 units of its larger TVs by the end of August. The larger TV in this includes those models with a screen size of 75-inch or larger, reports The Elec.

The company has also released a new commercial for the QLED 8K TV models showcasing how big the TV units are how it proves an immersive home theatre experience. Samsung is planning to launch more ads for the larger-sized TVs to drive the point home.