In a world rocked by the coronavirus pandemic and tensions with the U.S., the Chinese government is stepping up focus on the domestic market with the pronouncement of a “dual circulation” policy indicated by recent increased public discussion to crystallize some of the implications for global trade. The use of the vague umbrella of “dual circulation.” refers broadly to two circles of economic activity — internal and external — with greater emphasis than before on business at home. “The ‘dual circulation’ policy demonstrates China’s recognition that it won’t be able to rely on trade as much for the next two decades, as it did for the previous two,” according to Stephen Olson, research fellow at the nonprofit Hinrich Foundation, said. “The pursuit of deep economic integration with China is increasingly seen in the US as a strategic mistake, which worked out extremely well for China, but considerably less well for the US.” Already, tariffs in China’s trade dispute with the U.S. over the last two years have reduced the flow of goods between the two countries.  The high-level political talk comes just months before authorities plan to release China’s economic blueprint for the next half decade — the 14th five-year plan.

Economists at ICBC International, the Hong Kong-based subsidiary of the giant state-owned Chinese bank, have put out a series of notes in the last few weeks on “dual circulation.” One of the reports discussed the implications of the Chinese policy for the next round of globalization. The authors used two charts. The first showed an international economy focused on the U.S. as a global demand hub.  The second painted a world divided into three parts — Europe, North America and Asia — which would interact with each other on a regional scale. China and its “internal circulation” stood at the center of Asia.

Figure 1: Prior Round Of Globalization: ‘The World Is Flat’ 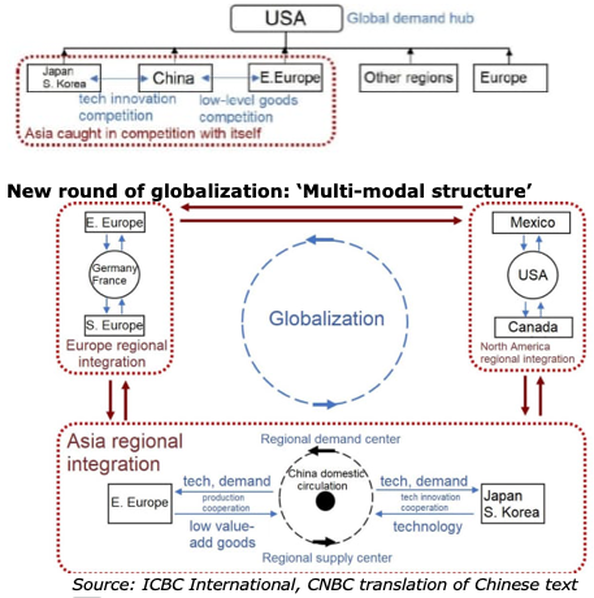 ​On an individual country basis, the U.S. is still China’s largest destination for exports. But last year, amid escalating trade tensions, North America ceded the spot for top trading partner to the European Union, according to China Customs data accessed through the Wind Information database. This year, the 10 countries that make up the Association of Southeast Asian Nations (ASEAN) became China’s largest trading partner, the data showed.

At home, China has its own litany of problems to deal with. Some of them are new, such as torrential floods in the southern part of the country this year that followed the shock of the coronavirus outbreak. Other long-standing issues have only become more pronounced, such as high reliance on debt for growth and an environment that favors state-owned enterprises to privately run businesses. The private sector generates most of the jobs in the country. From the perspective of Yan Se, chief economist at Founder Securities, greater policy emphasis on the Chinese market is partly a reminder to local governments about the work they must do to improve the domestic environment. He expects further policy support will come for foreign investment into China, and cross-border e-commerce.  As the Chinese market has grown and the challenges of cross-border trade have increased, more foreign companies are adopting a “in China, for China” strategy. Beijing has welcomed the investment and made significant efforts to keep the businesses in the country despite geopolitical tensions.

In July, China recorded 12.2% growth Y/Y in foreign direct investment to $9.05 billion, marking the fourth-straight month of increases since the height of the coronavirus outbreak in early February. In contrast, global foreign direct investment flows are expected to fall 30% amid the pandemic, according to a report in May from the Organization for Economic Cooperation and Development.

“Consumption will not be the economic driver this year or next year for sure. It will be investment and exports,” Dan Wang, Shanghai-based chief economist at Hang Seng China, said in a phone interview last week. “To increase consumption or its contribution to growth, China will have to do some major reform in its income distribution, and a big difficulty in doing that is the state-owned enterprise reform.”
​
But longer term, the pressure is accelerating for China to make that shift toward relying more on its own market. One of the reasons China is pursing “dual circulation” is that since the country is growing in global prominence, whatever it does will have a significant effect as other countries reassess how dependent they want to be on the Asian giant, Wang said.  “I think this phrase is mainly addressing the risk from the U.S.,” she said, “and China wants to make sure it still holds