The U.S currently holds the upper hand when it comes to semiconductor technology. That is why the ban on some Chinese companies from using US technology was hard felt. A few years back, most of the LCD panels in use by Chinese manufacturers in TVs, monitors, and other large-screen products were procured from Japan and South Korea. 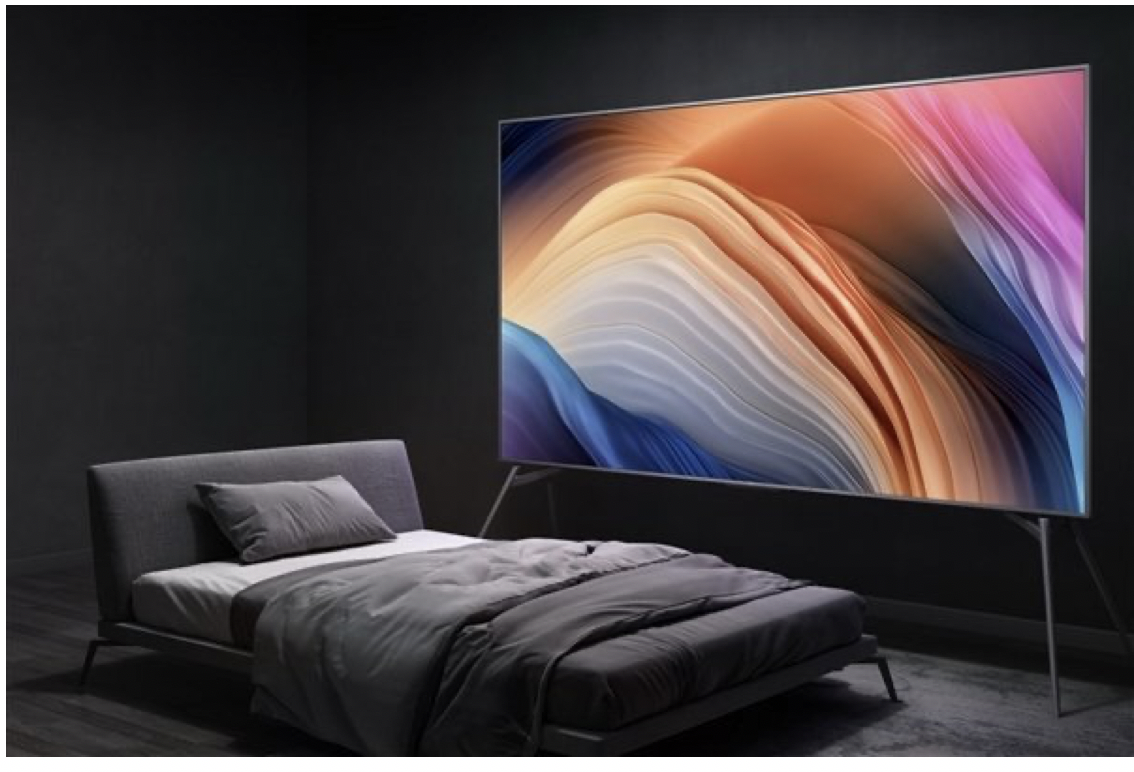 But in recent times, domestic companies like BOE have been able to overtake manufacturers from Japan and Korea to ship the highest volume globally. China’s display manufacturers have predicted that this year’s domestic panel production capacity will historically account for around 55% of the global panel shipments.

This was made known at the 2020 Chongqing Micro-LED Industry Innovation Forum and Konka Semiconductor Display Technology and Product Launch Conference was held yesterday in China. The statement is credited to Liang Xinqing LCD Branch Secretary of the China Optics and Optoelectronics Manufacturers Association.

Liang Xinqing also disclosed that the global display device output value in the first three quarters of 2020 was US$82.723 billion, an increase of 8.6% year-on-year. The shipment area was 178 million square meters, an increase of 5.7% year-on-year. The data for the first three quarters of 2020 in Mainland China shows that the TFT-LCD shipment area is 97.01 million square meters, which accounts for 54.5% of the global market and the output value is $26.685 billion US dollars.

However, in terms of AMOLED panels, lots of efforts are still needed to gain more market shares. In the first three quarters, the AMOLED shipment area was 1.09 million square meters, accounting for 0.6% of the global market, and the output value was US$2.709 billion.

At the same time, Liang Xinqing also mentioned domestic shortcomings. Currently, Japan has mastered the upstream core technology, South Korea’s OLED is the world leader. He added that China was currently gaining an advantage in terms of production capacity, but the technology structure is single and the entire industry chain is still to make significant headway.

Large Panel Display sales increased 2.3% m/m and 41.7% y/y in November.  Overall large panel shipments grew.67% however TV shipment growth declined for the 2nd month in a row while November’s steep increase (+6.7%) in aggregate TV panel pricing offset the decline in units shipped last month and will likely do the same in December, given that TV panel prices are expected to rise 6.0% this month, above our 4.3% estimate.

Panel producers are still incentivized to keep raising TV panel prices but for the first time this year we are beginning to hear that some TV panel producers are starting to worry that continual price increases into 1Q 2021 will increase the margin burden on TV set manufacturers, who are already expecting to see profits disappear in 1Q, and cause demand to weaken as higher prices are passed on to customers.  Concerns are also affected by shortages in various components, such as drivers and glass (see 12-15-20 – “Blackout in Japan”), where panel producers might be forced to allocate production, but in almost every instance panel producers will opt for the path that gives them the most profit over the next quarter or half, so we expect TV panel prices to rise further in January, albeit offset a bit by seasonality.  On a 3 year and 5 year basis, January TV panel pricing has declined 1.3% and 5.9%, but we note that in 2017 there was a very steep decline in January (-23.5%) that would have a significant effect on the 5 year average.

As noted, TV set brands are bearing the brunt of these panel price increases, especially as they roll through older, lower cost inventory.  While there was discounting during the recent holidays, it will be progressively harder to offer similar discounts going forward without further margin erosion.  There is some margin pressure ‘sharing’ with retailers, but TV set brands must also consider the elasticity of TV set product and with slower demand months ahead, we expect a bit more caution in terms of TV panel buying, as long as shortages become less of an issue in 1Q.  Right now, the only objective for both panel producers and TV set brands is to move as much product as possible before the end of the year and into Chinese New Year, so concerns about 2021 demand are secondary considerations at the moment. 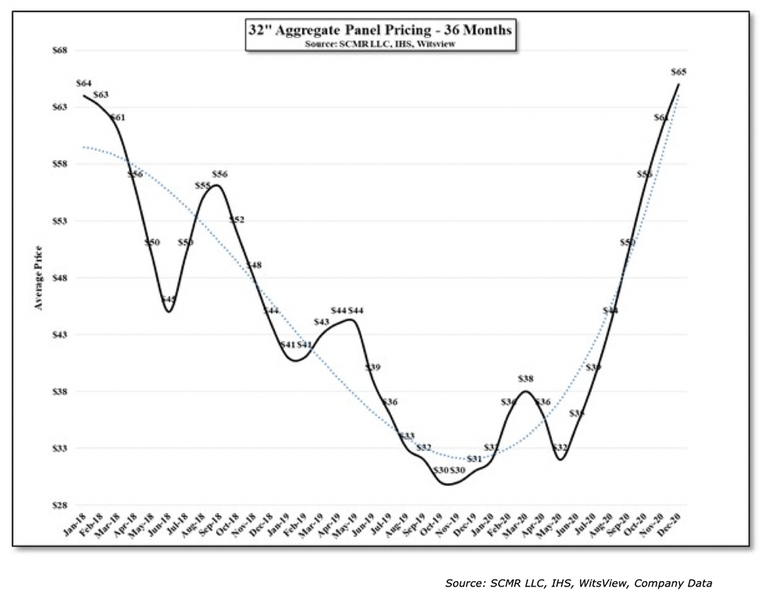 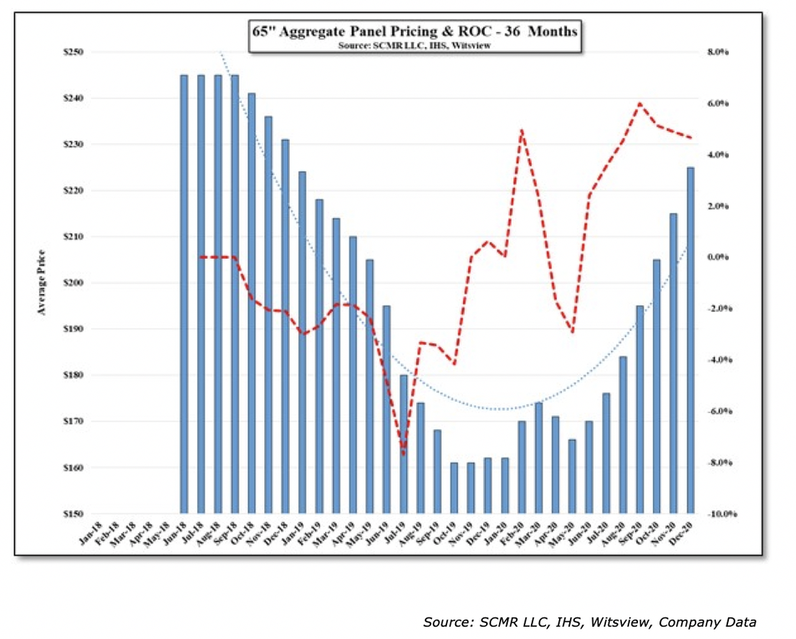 ​Omdia said the 55-inch 4K OLED panel price is US$510 and the Q4 price of the LCD panel of the same size and resolution is US$178. The difference, 2.86 times, has been reduced from close to five times in three quarters. In Q1, the respective prices were US$550 and US$115. In the first half of this year, Chinese manufacturers dominated the global LCD market with low-price products to block a price increase. In the second, however, the COVID-19 pandemic led to a surge in LCD TV demand and the 54 percent price increase from US$115 to US$178.

In the meantime, OLED TV panel supply has increased to lead to price stabilization. This is because LG Display, the only company in the world that produces OLED TV panels, started mass production in Guangzhou in July. The OLED panel price is likely to keep falling for a while as the lower price will increase the demand and raise the yield and the yield stabilization will result in another price reduction. In addition, companies other than LG Display will enter the market to supply more.
According to the market research firm, the 55-inch OLED TV panel price is expected to change from US$497.6 to US$436.6 from 2021 to 2022. Its estimate for 2025 is US$347.2.