The company had an operating income of 49.655 billion yuan ($7.8 billion), a Y/Y increase of 107.87%. The company’s net profit also rose to 5.182 billion yuan ($812 million), a Y/Y increase of 814.46%. BOE’s Mini LED, flexible, 8K, and other innovative technologies have continued to make new breakthroughs. Glass-based Mini LED products have increased their dot pitch to the industry-leading 0.9mm, with a 115% NTSC ultra-high color gamut. Sigmaintell says BOE’s market share of flexible screens ranks first in the Chinese market and second in the world. At the 2021 International Display Technology Conference (ICDT 2021) in Beijing, BOE officially announced the full mass production of a new generation of glass-based Mini LEDs. Furthermore, the company also demonstrated a series of cutting-edge display technology products including the world’s first AMOLED flexible sliding screen.

At the 2021 International Display Technology Conference (ICDT 2021) in Beijing, BOE demonstrated a series of cutting-edge display technology products including an AMOLED flexible sliding screen.  BOE claims that this product has an outer curvature radius of only 4mm and a dynamic scrolling frequency of 200,000 times. By sliding in and out, the product can be freely converted between mobile phones and tablets. Since it is a sliding display, the screen has no crease. 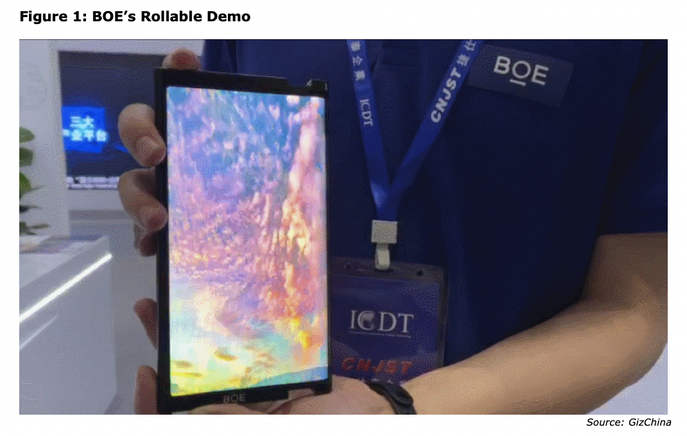 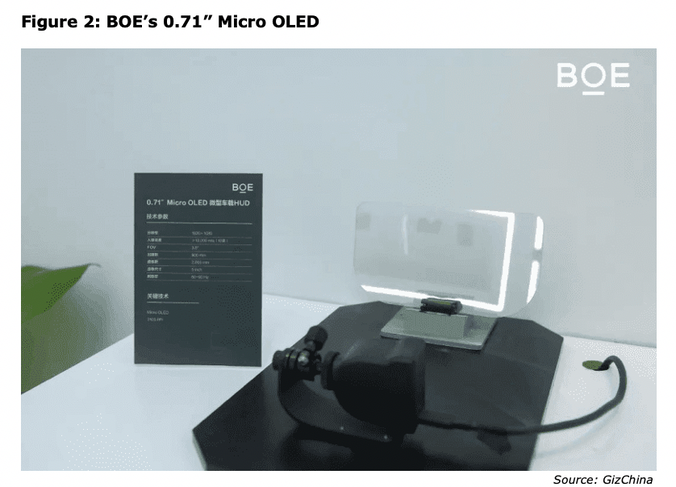 ​BOE also demonstrated a new mini-vehicle head-up display that is more than 3/4 smaller than the conventional head-up display systems. The display module uses high-brightness Micro OLED technology and micro-projection optical technology and comes with 10,000 nits. It can be used in various complex outdoor scenarios which makes it a multi-use product. BOE claims that this device has a good display effect in a strong light environment.

BOE also displayed a professional gaming display with a 480Hz refresh rate that has a 1ms grayscale response time. BOE recently released its first-quarter report of 2021.

On March 30, we noted that OLED driver chip manufacturer Magnachip  had received an offer from Wise Road Capital, whose entities were to buy the company for $29 per share, a 75% premium to the company’s then 90 day average price, with a total deal price of $1.4b.  The buyer was a Beijing-based Private Equity firm that has a number of smaller investments in technology companies mostly in the semiconductor space, including Huaqin Communication one of the largest global OEM for a variety of CE devices.  As the 2nd largest OLED driver manufacturer, behind Samsung Electronics (005930.KS), Magnachip is a very important part of the OLED display supply chain and would give the Chinese OLED industry a significant boost.

As the process node for producing OLED drivers is 28nm, the technology is not considered of major importance to national security in South Korea where it has much of its manufacturing, and last month the South Korean Ministry of Trade, Industry, and Energy gave it tacit approval to the transaction, knowing that Huawei and others were already developing OLED driver technology on the Mainland.  While we had suggested that getting such a deal through regulatory authorities in both the US (MX is a Delaware corporation) and Korea, the path toward a conclusion seemed to be opening.

As always in the CE space, thing are not always what they seem and yesterday the South Korean press indicated that the Korean government had changed it view on Magnachip’s technology, and that it had been designated as ‘core technology of South Korea’, which would seem to have ended the deal.  It seems that the reason for the change in attitude toward the transaction in Korea was the result of an investigation by the Committee on Foreign Investment in the US (CFIUS), which likely resulted in a negative view from the US Treasury Department, then relayed to Korea.  As the US is particularly sensitive toward doing anything that might help China in their bid to develop their own semiconductor infrastructure, the outcome of such a CFIUS investigation was almost a given.  Whether CFIUS could have blocked the transaction itself is no longer an important point as it looks like both countries are now uniting against the deal, but it doesn’t end there.

Last night, Magnachip received a new offer, roughly 20% higher than the initial offer, from another group of Chinese and Hong Kong investors, despite the potential problems with the authorities, which was both a surprise to us, and a surprise to investors, given the 12%+ move the stock made this AM.  How this offer is any different from the previous one from the standpoint of the government’s involvement, we don’t know, but that doesn’t seem to have made much of a difference to Cornucopia Partners, the entity that has made the most recent bid.  There is a $105m termination fee to MX if the original deal is not completed, with certain reductions depending on the circumstances.