Chris Beckman, Boeing Lead Lighting Engineer gave us a hint of the company’s future use of OLEDs, when he presented at the OLED Summit in September. Now Boeing has revealed a new addition to its Boeing 777-200 ecoDemonstrator… a TV screen ceiling powered by OLED screens. This aircraft is used to test new tech, from new environmental efficiencies to cutting edge concepts, and this new idea is designed to improve the ambience and experience of future flying.

Figure 1: The Special Boeing 777. Photo: Boeing and Possible Interior
​The special widebody aircraft has fitted the center column of the ceiling of the cabin with special OLED screens. Boeing has been a bit tight-lipped as to the actual use of the screens, other than an upgrade from the LED mood-lighting on most modern aircraft.
Figure 2: More Possible Interior Designs

Source: Beekam
But this feature is just one of many about this special Boeing 777 aircraft. In addition to the special OLED screens, the aircraft also has improved smart technology to diagnose many common customer problems (such as their entertainment screen not working, broken seat) as well as ‘vortex generators’ that can retract out of the wings to improve fuel efficiency during take-off and landing. This latter development might very well be the next generation of ‘winglets’.

“Boeing’s ecoDemonstrator program accelerates innovation by taking promising technologies out of the lab and testing them in the air to solve real-world challenges for airlines, passengers and the environment.”
For those who are environmentally conscious, every Boeing 777 ecoDemonstrator flight flies on sustainable fuel.
Boeing actually uses a different aircraft every year, which is inactive service with an airline and currently flying real-world routes. Whilst this year’s aircraft is a Boeing 777, Boeing has also used a 787 in the past. Etihad might be next year’s aircraft, with Boeing teaming up with the airline to build a special Boeing 787-10. 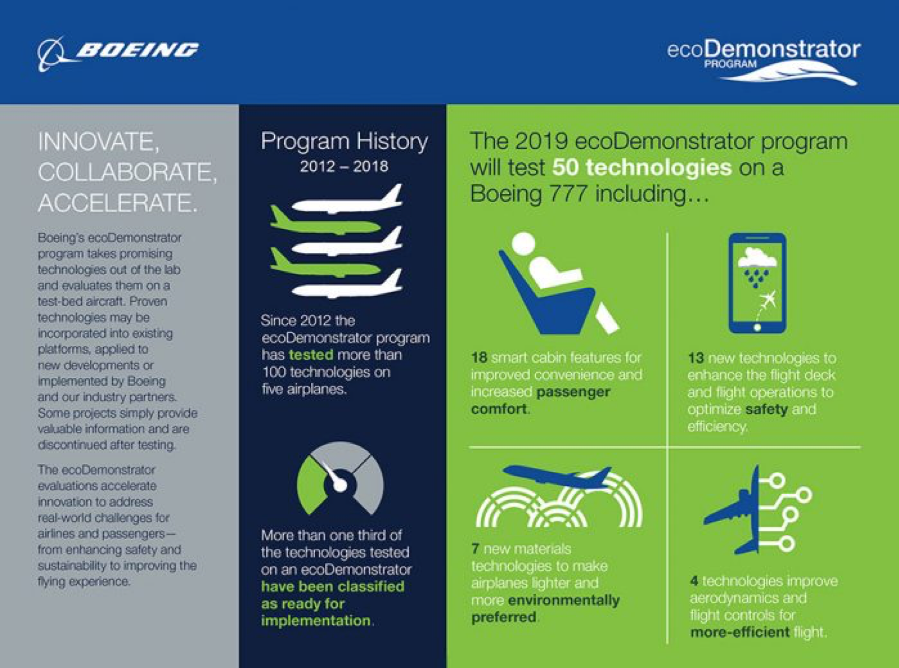 Source: Company
An infographic that explains the details of the special Boeing 777. Photo: Boeing
This aircraft does not just use Boeing technology but is also a collaboration with a variety of other firms.
“Collaboration with industry partners is foundational to the ecoDemonstrator program to support the constant evolution of new ideas and advance aviation. Key partners on the 2019 program include Collins Aerospace, DLR German Aerospace Center, Embraer, Fraport AG (Frankfurt Airport Services Worldwide), Honeywell, Luftfahrt-Bundesamt (the German civil aviation authority LBA), NASA, Ophir Corp. and Universal Avionics.”
And speaking of technological improvements, the ecoDemonstrator program since its inception has brought the following new technologies to the main Boeing line that we use today: