Bigger Phones Are Not Necessary a Positive to All People
March 08, 2020

In a rare challenge to the gender neutrality trend, spurred by the introduction of the Samsung S20 Ultra and its 6.9 inch display, which is even larger than the gargantuan Samsung Galaxy Note 10+ (6.8-inch), tech writers (mostly male) are arguing that these phones are too large, don’t fit in the typical pants pocket and require two-hands to operate.  Meanwhile, most females carry their phones in a pocketbook, have always used two hands to operate the phone and like the larger screen especially when shopping on-line. Even the increased weigh, the Ultra at 221g and denser than the king-sized Note at 196g doesn’t seem to be a problem. The larger displays are good for the display industry consuming more capacity to improve utilization rates and improve the experience of using the phone for watching streaming videos.

As some indication of the opportunity, Quibi has managed to coax people into spending a metric ton of money on it before it’s even here. The short-form video streaming service, notorious for raising $1 billion before anyone saw the app, has raised almost that much again. 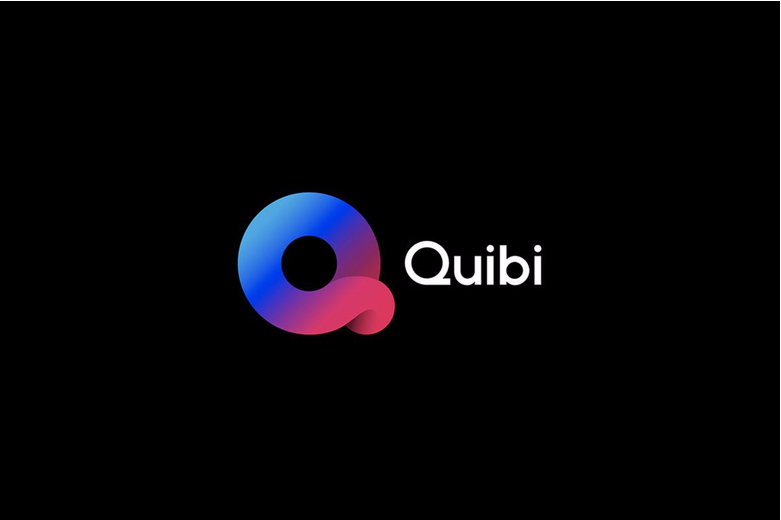 ​Source: Company
The surge in display size growth escalated with the release of the 6.67-inch OnePlus 7T Pro, 6.8-inch Galaxy Note 10+, 6.8-inch LG V60, and 6.9-inch Galaxy S20 Ultra. The 6.5-inch iPhone 11 Pro Max is now viewed as being on the small side (which is probably why Apple is rumored to bump the size of its biggest flagship to 6.7 inches this year). The V60 is LG's biggest phone at 6.8 inches. The Galaxy S20 starts at 6.2 inches and goes up from there, nearly half-an-inch bigger than the Galaxy S9 from just two years ago. 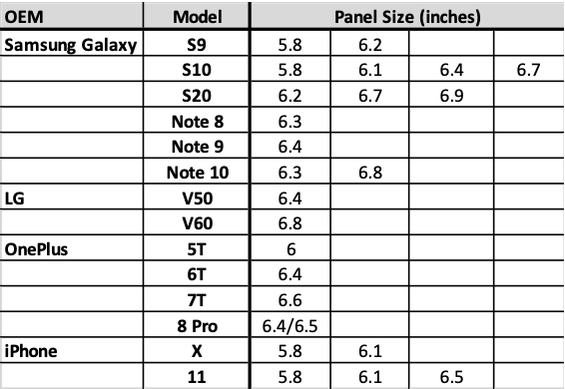 Source: Company Reports
Flagship Android phones have ballooned over the past two years especially when factoring in the ever-taller screen ratios. Reviewers complain that the Galaxy S20 Ultra barely fits in a pocket, and its size makes it difficult to use—even with two hands. Case in point: issues with autofocus are at least partially due to the inability to keep the phone still while snapping a pic and most pants pockets are not big enough to keep the phone from falling out when sitting. Compared to the Galaxy Note 10+, the S20 Ultra is only 4.6mm taller, but for the impact it had on people’s grip and reachability, it may as well be a foot. By comparison, the Galaxy S20 is 9.5mm taller than the S10e, so by jumping from 5.8-inch to a 6.2-inch screen you’re getting a significantly bigger phone, too, which for many will cross the line from useable to unbearable.

Some believe, usability has gotten lost in the race to be biggest, and there’s no signs of it slowing down. If anything, with the advent of folding tech, phones are going to push further into mini tablet territory. Folding phones might still be novel and interesting, but we’re a long way from mainstream use. The Galaxy Z Flip is certainly a big step in the right direction, but with so-so cameras, nascent UIs, and uncertain form factors, foldables are still in the experimental phase and likely will be for a while. But even if foldable phones were to magically become durable and affordable, the only real problem they solve is pocketability. Folded phones could quickly get just as big as today’s non-folding handsets, reaching a crossroad: There’s only so much bezel that can be trimmed, and if phone screens keep increasing in size, Galaxy Tab A-sized screens might result in just a couple more years, folding or not.
​
Phones used to have so many new features people wanted to upgrade every year, but with the push into more screen, people are holding onto their phones longer. Part of the reason is the price, but that’s merely a consequence, not the cause. The larger issue is that phone makers are reserving their best features for phones with the biggest screens, essentially forcing consumers to buy more phone than they might want.

Perhaps, the growth in size will instill new interest in the once popular “male bag” to ease the burden of carrying the big phones. Looking for positives, one unintended consequence is that if it takes two hands to use the phone, driving and texting will no longer be so popular!

TCL ranks #10 in smartphone shipments and have been trying increase its relevance by recently showing a concept phone with a pull-out screen. Now, the company is has new two concept phones: one with a rollable display and one with a tri-foldable display.

TCL Concept with Rollable Display
This concept utilizes a flexible display to build upon the same concepts of a folding smartphone. This concept primarily shows off TCL’s display prowess through their partly-owned subsidiary CSoT as well as the room for innovation and thinking outside of the box when it comes to folding smartphones.

​Source: Company
​
The phone uses internal motors to extend a 6.75″ AMOLED display to a 7.8″ display size at the press of a button. When not in use, a motor-driven sliding panel conceals the flexible display. think of it as a Xiaomi Mi MIX Alphasmartphone, but with a protective casing on the back display — the display is stored flat underneath the casing, and you can extend the device by pulling out on one side on the front.
The phone is just 9mm thick, which is about the same as the Galaxy S20 Ultra, so it retains practical usability. TCL also claims that because of a larger axis and rolled display, the device has no wrinkles or creases, thus tackling one of the annoyances with current-generation folding smartphones.

For a phone that converts into an even larger tablet, this TCL Concept has a 6.65″ 3K AMOLED display with a 20.8:9 aspect ratio that can unfold on both sides to become a large 10″ tablet. 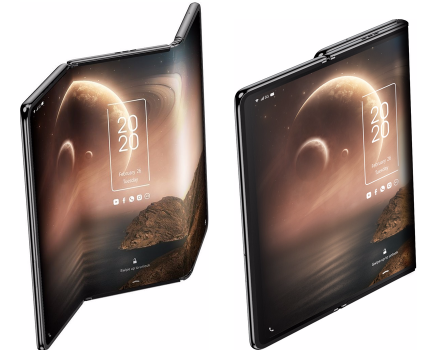 It utilizes both DragonHinge and ButterflyHinge hinge designs, one on either side. TCL claims that there is smooth folding inward and outward with a minimal gap, but these claims remain to be independently assessed. Only one side of the phone is exposed when in phone-form, which is unlike the Xiaomi folding phone prototype that had two outward-folding sides that left the screen exposed on both the front and back in the phone-form.