Vertical Divider
Battery Technology – The Missing Link
​
As computer scientist Rodney Brooks recently stated, "If I were to offer advice to an ambitious young graduate today, I'd have one word for her: 'Batteries.” Over the past 30 years, Batteries have gotten a whole lot better, but from an annual improvement level trail other electronic components like semiconductors and displays.

Lithium-ion batteries improves at a CAGR of 13% since they were commercially introduced in 1991, according to one study. Lots of money is flowing into battery R&D as we attempt to improve battery life for things as varied as mobile phones, electric cars, and renewable energy grids. Tesla is fond of talking up the two-million mile lifespan of its batteries, but the real world may not be kind to such projections. But there are compromises, using Tesla’s Supercharger stations kills long-term battery life. This isn't Tesla's fault––it's just how batteries work (supercharging involves more electrical current creating more heat, which degrades the battery). And it's not just Tesla batteries: There's a careful dance required to baby your smartphone batteries (don't let them dip close to 0%, etc.) to ensure maximum battery life.

One problem with battery innovation is that it isn't something venture capitalists like to dump money into for quick returns. As Dag Pedersen of Mascot AS has noted:
With almost all battery types, development time is typically extended–10 years is commonplace–with many concepts abandoned in the laboratory, and others having their initial launch dates put back, often multiple times, when these are found to be unrealistic. This extended development time makes battery manufacture an unattractive proposition for investors–meaning it takes real commitment and patient, understanding benefactors to bring a new type of battery to market. It is hardly surprising, therefore, that the successful launch of a new battery is not only a rarity but a major event….

But researchers developing a new generation lithium-ion ("can store more lithium in positive and negative electrodes and will allow for the first time to combine energy and power"), lithium-sulfur ("A Li-S battery uses very light active materials: sulfur in the positive electrode and metallic lithium as the negative electrode…[making] its theoretical energy density...extraordinarily high"), and solid-state batteries ("permits the use of innovative, high-voltage high-capacity materials, enabling denser, lighter batteries with better shelf-life as a result of reduced self-discharge"). And there is a wide array of other experiments in improved battery technologies (cobalt-free lithium-ion batteries to lower costs, silicon anode lithium-ion batteries that replace graphite to dramatically increase capacity, etc.). 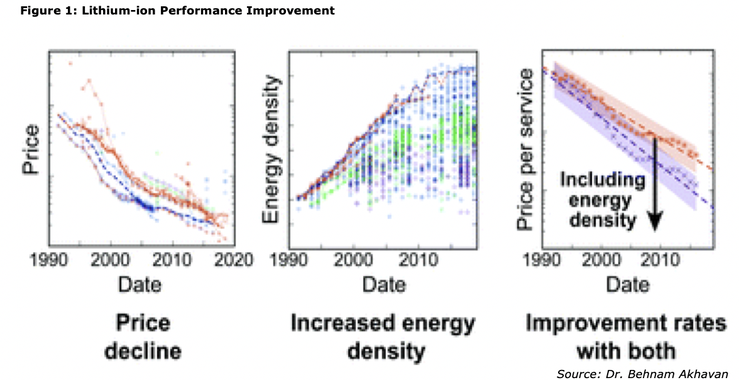 Given the 10-year cycle don’t expect batteries to get light or more long lasting in the short term, unless of course ‘true wireless charging is real.