Vertical Divider
AUO (and Likely Innolux) Margins Peaking But Could Return to Negativity by 2022/3
​
AUO was a victim of the increase in large area capacity that begin in 2018 and peaked in 2019, as its gross margin dropped to ~5% thru Q220, when the gross margin was ~3%.  During the period between Q418 and Q320, the gross margins negative or under 3%. The rise in large area prices resulted in positive gross margins between 10% to 30% for the next year. Large area panel ASPs have stabilized , but TV prices  are beginning to fall as the notebook market is strong but small size TV demand is dropping.
LCD capex, which was forecast to end in 2023 is now seeing new life. The drop in demand and the new capacity could push AUO back to negative gross margins beginning in 2023. 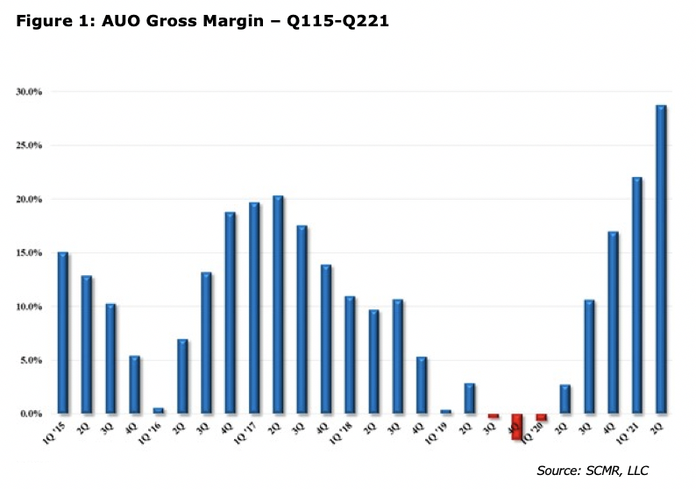 IT and large TV panel prices are expected to enter a downtrend from October, causing earnings to peak in 3Q. Based on historical precedence large LCD panel prices could fall by over 40% in 2022, when the supply-demand gap is expected to widen (supply capacity up 12.9%, demand up 3.8%). Factors that might cause a steeper fall in prices than expected include: 1) a collapse in US demand; and 2) the possibility of a correction in large panel orders: lead times for completed products (from procurement through delivery to retail outlets) in Europe and the US appear to be around 3–6 weeks longer than normal due to supply-chain turmoil,
component shortages, and logistics issues, but if end demand falls short of expectation from the year-end through 1H 2022, orders could drop off. IN addition as reported by DSCC, capex for LCD expansion is increasing.

In that context, it is intriguing that AUO, typically cautious on raising capacity, has decided to invest $1.1b. Although the company was previously considering investing in IPS capacity for IT use on L8B (G8) lines, which form the mainstream for TV-use VA panels, it could have converted existing lines (i.e., reducing output for TV use) rather than build new ones. The new investment (around +25k/month) indicates an expectation that 1) demand for NB and high-end monitors (such as gaming monitors) will continue rising, 2) demand for large TV panels will not fall.

The decision seems to be driven by the significant risk that brand owners might increase the proportion of panels purchased from Chinese makers. AUO has also separately decided to increase production by around 7k at the Kunshan plant (L6K/G6) in China, which makes substrates for micro-LED and LTPS- LCD (NB, automotive).  The decision indicates an acceleration in the switch to NB and automotive-use LTPS.