Audi took its OLED backlights to the next level with the ‘light tunnel’ where the engineers and designers have been meeting for years to design and test their latest advancements in lighting tech. Recently, OLEDs have been keeping those that work in Audi’s light tunnel busy. The OLED represents a major shift in how Audi will light the way ahead for drivers of current and future models. “Headlight technology has seen a rapid evolution at Audi in recent decades,” Dr. Werner Thomas, OLED technology project manager at Audi, explains some 12 years after the Audi R8 required special regulatory approval for its first-ever LED headlight system — a live stream from the light tunnel showcased some of Audi’s OLED-powered innovations that are in production now, or in the pipeline. Audi is the first automobile manufacturer with digitized taillights, which debuted earlier this year in the refreshed Audi Q5. While a conventional LED is a point light source, an OLED is what Audi calls a panel radiator. In simple terms, think of an LED like a lightbulb and an OLED like a very thin, very bright display screen. A single OLED segment — the new Q5’s taillamps each have 18 — is about the size of a human fingernail and contains 1.3 million pixels capable of infinite brightness output variability from 0 to 100 percent, continuously, and thousands of times per second. The OLED can segment the light it produces, splitting the panel surface into individual segments with minimal gaps between the segments. Brightness can vary between segments, and fluid animations can be displayed. Each segment can be a different brightness, contrast is maximized, and best of all, there’s no need for reflectors or complex optics that earlier lighting systems used to shape and form the light they emit before it’s blasted onto the road ahead. The OLED technology is so precise, it can even be used to project a black-and-white video or markings onto any forward surface. And it does it all with higher energy efficiency and performance than conventional LED lights, and all while using much less physical space. That’s the sort of win-win-win situation that designers and engineers love. As the technology evolves further, new curved OLED designs will open up even further possibilities for lighting innovation. Audi’s engineering and design teams work to create those innovations under direction to strengthen the character of the car, while also increasing safety on the road for the driver and everyone nearby. The added bonus enabled by the OLED’s high-resolution lighting display is a higher degree of driver personalization. No longer constrained by the size and optics of conventional LED, the OLED taillights in the refreshed Q5 can serve up one of three taillamp signatures, giving the vehicle’s rear end a customized look that can even be triggered to change based on the vehicle drive mode. Sport mode? There’s a taillamp signature for that. As a vehicle creeps up on a parked Q5 in traffic, the OLED taillamps can activate more intensely, drawing more attention to its presence on the road and warning the incoming vehicle to brake. As the Q5 sets off, the taillamps return to a normal driving signature seamlessly. With pixel counts in the millions and no special optics required, the Q5’s OLED taillamps become less like an array of lightbulbs, and more like an array of small display screens. 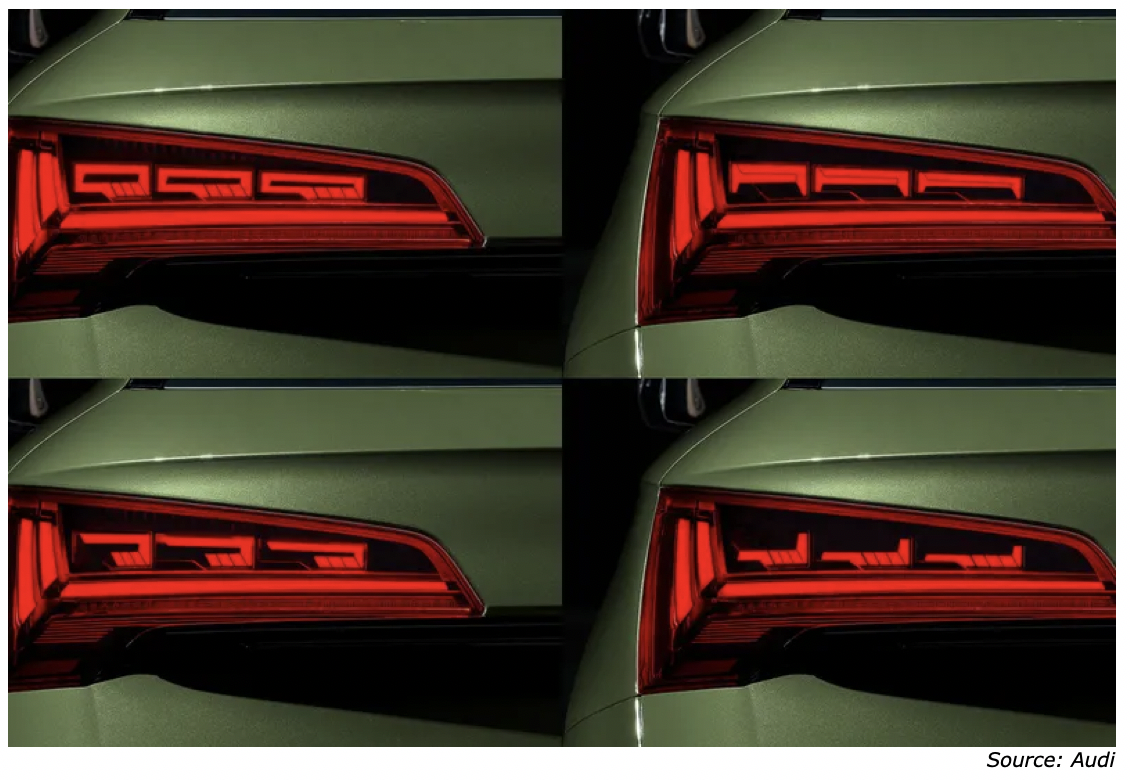 Audi’s OLED technology enables the Q5’s taillights to tailor the lighting arrangement based on the drive mode selected. Capitalizing on this, designers even created special animations that play in the taillamps when drivers approach the car or lock it and walk away. These animations can be customized as well, giving drivers a further means of making their Audi their own. The taillamps can even be made to brightly flash a universally recognizable hazard-triangle or exclamation mark when the hazard lights are activated, drawing attention to the situation and communicating more clearly with those nearby.

Some other interesting feats are in the pipeline, as the technology and regulations unfold. For instance, with OLED technology turning headlights into high-resolution black-and-white video projectors, the forward beam pattern can be shaped almost infinitely, on the fly, and in response to a multitude of inputs.  Audi’s digital OLED lights can pre-illuminate the traffic lane a driver is signaling towards, extending the light further towards a detected guardrail nearby for a more confident lane change in the dark. With the capability to project black and white video onto any forward surface without complex optics, OLED technology could even be used to display satellite navigation information or lane-keeping guides onto the road ahead. Other functionalities on the horizon include the ability to spotlight nearby pedestrians and cyclists in real time, or to actively bend high-beam projection around oncoming traffic to prevent dazzling them, even while your high beams remain on.

“In addition to perfect contrast, the benefits of digital OLED are a high level of homogeneity and minimal gap between the segments,” explains Stephan Berlitz, head of development, light innovation at Audi. “Looking to the future, digital OLED is therefore the perfect technology for executing personalized light design with a high degree of precision and extensive variability. This technology offers all sorts of opportunities for further development.”
​
Stay tuned for more automotive lighting advancements, as innovators like Audi turn their capabilities towards the latest lighting tech.