Royole came to DisplayWeek with what it says is the first stretchable micro-LED display that can be mass-produced. It can be twisted, pulled and even bent into spherical shapes. It could lead to new wearable devices, smart car windshields, and beyond. Panel makers, always looking for new opportunities ho[e that greater design freedom will eventually lead to increased sales as shown in the next figure. 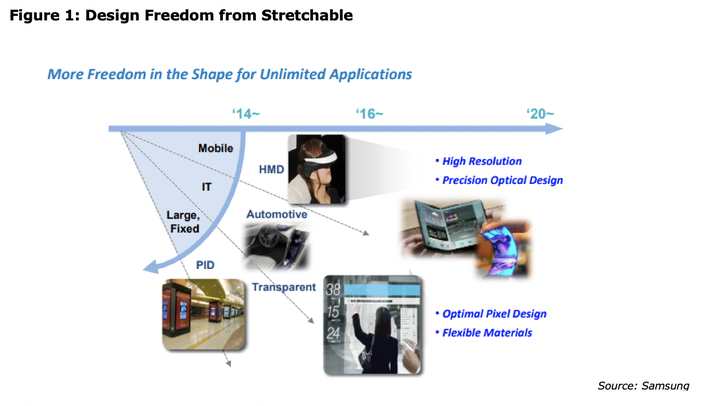 ​The first opportunity could be in the rapidly expanding automobile market, where stretchable displays designed to fit the contours of the dashboard would be a significant improvement in the car design and comfort.

​Royole, the first panel maker to release a foldable phone has introduced what it says is the first stretchable micro-LED display to work with industrial manufacturing processes. The 2.7”, 96 x 60 demo panel doesn’t look like much by itself, but it can take more abuse than other flexible screens. While the technology isn’t quite “3D free form” like Royole claims (convex bends can’t go beyond 40 degrees, for instance), it can take a lot of abuse, while working properly. Royole, a company very experienced with OLED prototypes, believes MicroLEDs can be differentiated from OLEDs on performance and form factor because, they posture that TFE is thicker than the elastomeric material not shown in the figure below.

Royole defines three manufacturing steps that are similar to other display technologies:

​
The demo panel produces 200 nits at 108% DCI-P3 and suffers from an IR drop. They claim other standards, but unlike OLED displays, the CIE standards don’t appear to be selectable, but the panel supports biaxial stretching.

​In a talk from Hangyang University, the speaker identified a number of issues with stretchable technology that needed to be addressed, including

Some Hangyang University’s work is summarized in the following figures: 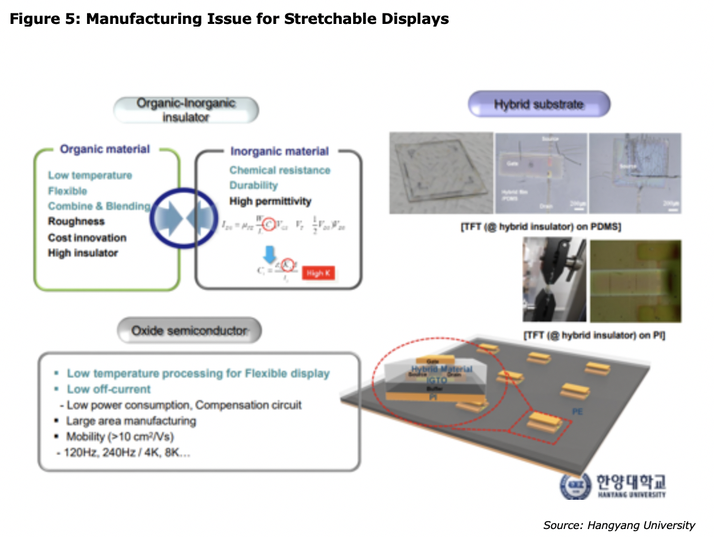 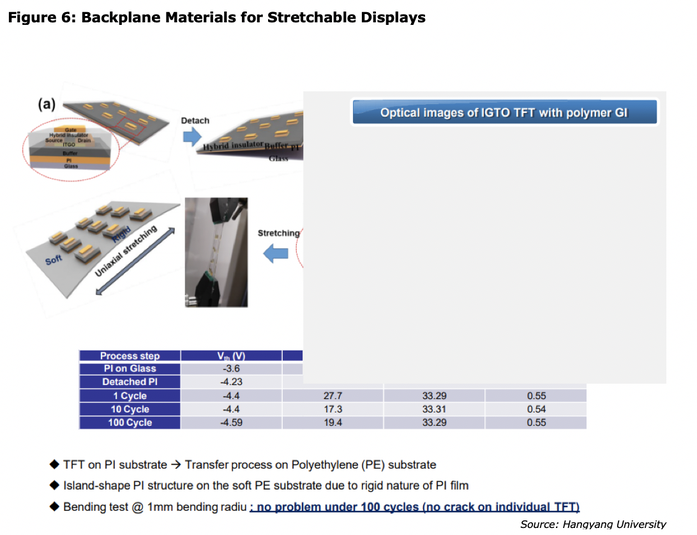 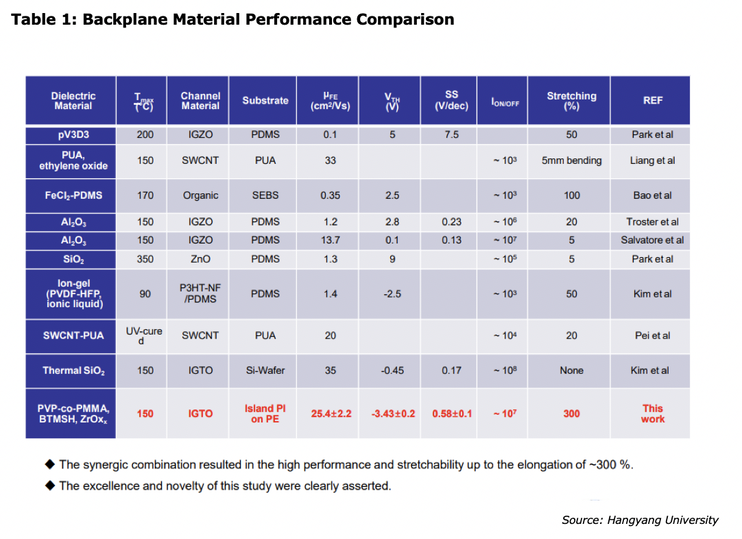 ​The stretchable display would be applicable for wearables that could either handle more abuse or conform to new shapes. Royole envisions augmented and virtual reality glasses, smart car windshields and other devices transparency is critical. 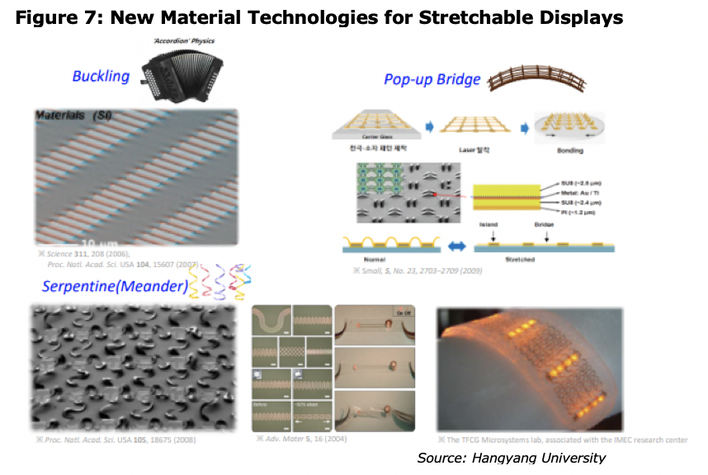 ​Royole didn’t say when the stretchable micro-LED might make its way into production, but Royole needs to scale the technology to different sizes and resolutions (it can reach up to 120PPI, Royole says). 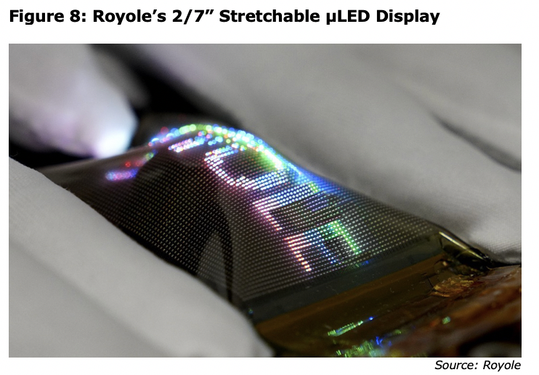 ​
Although Royole claimed leadership in stretchable displays, Samsung has been working on the technology for years and has produced a number of stretchable OLED prototypes, both large and more sophisticated than the Royole demo, including a 13” 300 nit display using a new encapsulation technique which they called u-TFE. ​ 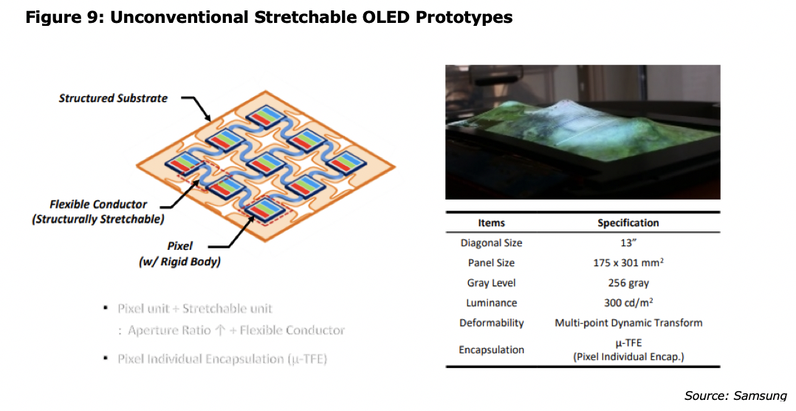 ​They have also developed 2D and 3D stretchable prototypes of various dimensions. 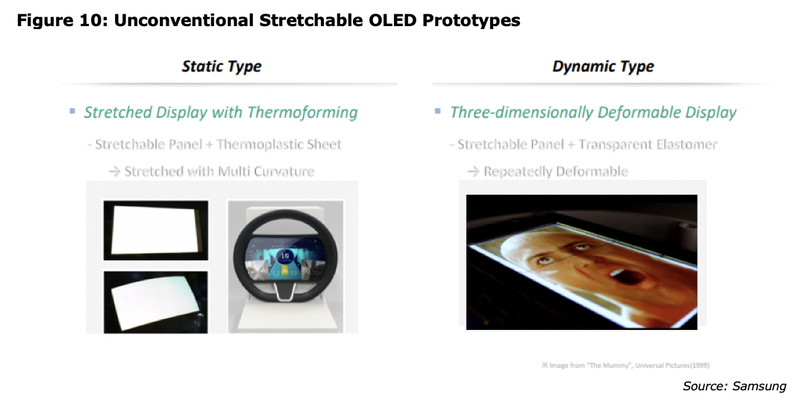 ​Perhaps the most intriguing is a 13” dynamic 3-D deformable displays showing lava movement so realistic, that looks real.