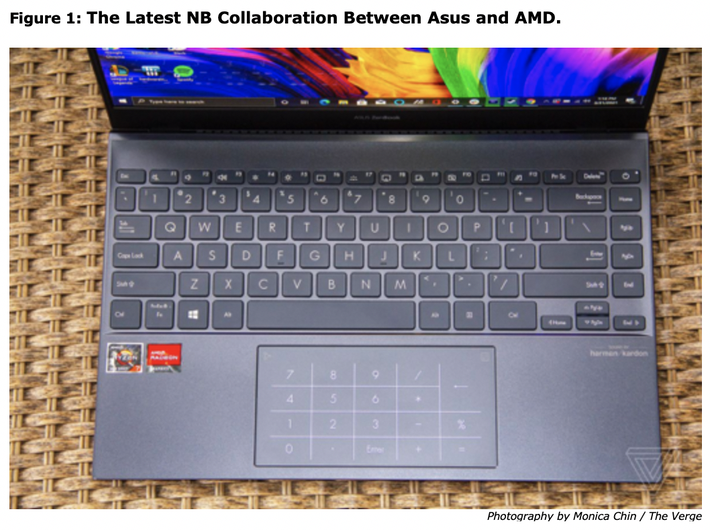 ​Contenders from the Ryzen 5000 mobile series have been great performers with excellent battery life to boot.  Comparing this system against competing laptops with Intel’s quad-core Core i7-1165G7 found in a number of the best laptops out there, including ASUS own ZenBook 14 and Dell’s latest XPS 13.
Positives
Negatives

The ZenBook 13 OLED dominated these laptops on battery life that averaged 11 hours and seven minutes of continuous use. That’s multiple hours more than the results from the XPS 13 and the ZenBook 14 through the same workload, both of which have typically more power-efficient LCD panels instead of OLED. The device took 56 minutes to juice up to 60 percent during light use. The OLED XPS 13 lasted for less than half of that time. Part of the reason is no doubt that the ZenBook’s screen is only FHD (1920 x 1080) resolution, while most other OLED panels are 4K or close to it. That resolution difference may be a dealbreaker to those with particularly discerning eyesight or to folks hoping to do color work, but this screen still looks quite good. The difference between an OLED and an LCD panel is most noticeable viewing an image or watching a video: The per-pixel lighting produces brighter whites and darker blacks.

The ZenBook 13 delivers vibrant colors and crisp details. It covers 100 percent of the DCI-P3 gamut and reached 368 with some glare at lower brightness settings, but not enough to interfere with working indoors.  The eight-core 5800U tore through dozens of Chrome tabs and apps with little to no heat anywhere in the chassis.  CPU jumped as high as the low 90s (Celsius) during gaming, but it stayed at acceptable temperatures otherwise.

There’s a “Whisper” fan profile if the noise is a bother. AMD’s recent integrated graphics have been fairly comparable to Intel’s Iris Xe graphics in the past, and while performance will always vary by title, that’s about what panned out here.
It’s supposed to increase cooling capacity, and it also conveniently hides some of the bottom bezel.
ASUS ZENBOOK 13 OLED SPECS

The ZenBook 13 OLED was also middle of the pack when it came to video workloads. The device completed an export of a five-minute, 33-second 4K video in 14 minutes and 14 seconds, which is a few minutes slower than both the ZenBook 14 (11 minutes and 28 seconds) and the XPS 13 (10 minutes and 43 seconds), and also slower than the M1 MacBook Air (eight minutes and 15 seconds). It’s not a surprise that the 5800U was weak on this test, as it lacks Intel’s Quick Sync feature. It was an improvement over the 15-inch Surface Laptop 4, which has a last-generation AMD Ryzen 7 4980U and took over 16 and a half minutes to complete the same task.
This ZenBook also scored a 201 on the PugetBench for Premiere Pro benchmark, which measures performance on real-world Premiere Pro tasks. That also beats scores we saw from last-generation Ryzen systems, such as the Surface Laptop 4 and the Acer Swift 3 with a Ryzen 7 4700U. It loses once again, though, to the XPS 13 and the MacBook Air.

Every smart device now requires the buyer to agree to a series of terms and conditions before using it — contracts that no one actually reads. It’s impossible for us to read and analyze every single one of these agreements. But we started counting exactly how many times you have to hit “agree” to use devices when we review them since these are agreements most people don’t read and definitely can’t negotiate.
To use the Asus ZenBook 13 OLED:
The following agreements are optional:
That’s seven mandatory agreements and 15 optional ones to use the Asus ZenBook 13 OLED.


Samsung unveiled two new members of its Galaxy Book line. There’s the Galaxy Book Pro, a clamshell, and the Galaxy Book Pro 360, a 2-in-1 convertible. Both devices come in 13-inch and 15-inch sizes, and all four configurations include AMOLED screens. They’ll be some of the lightest and most portable PCs you can PCs available and are powered by Intel’s latest 11th-Gen processors.